As you know, I spent my week at Gamescom 2019 in Germany, with Logitech G. Between checking out all the new games and queuing in the merchandise hall, I had a chance to sit down with Logitech G and take a look at a bunch of their new offerings. Some of those offerings are still under wraps till late September (and I cannot wait to share them with you), but one new product I am allowed to talk about is the Logitech G G915 Lightspeed keyboard.

I had a chance to sit down with Mark Starrett, the senior global product manager at Logitech G and get hands on with a produce he has been working on for some time, the Logitech G G915 Lightspeed keyboard. It’s been about 5 years since Logitech G dropped a new keyboard in the 9 series range. Starrett said the biggest hurdle was making something sleek and thin but still with mechanical switches. However, it has now been done with the G915, which sees the GX switch swopped out for GL Mechanical switches. These low profile switches are half the height of the GX but give you the same feel, durability and shorter activation. You’re getting the same performance on a lower profile. Starrett proceeded to explain to me how Logitech G partnered with Berkeley University to study the performance on the switches not only for typing but gaming. Every switch is tested versus batch testing, ensuring the quality we’ve come to expect from Logitech. You’re looking at a keyboard with a height of around 22mm.

My biggest concern on seeing the G915 in the flesh was the wireless RGB offering. Don’t get me wrong, the sleek low profile design with brushed aluminium finish is sexy but I had concerns around the keyboard being wireless, concerns that were amplified when I saw the keyboard’s full customisable RGB offering. However, Starrett was quick to dismiss my fears. Logitech G prides itself on being the choice of serious gamers, so wireless latency was something they were fully aware of and ensured didn’t impact the G915. He assures me that the latency on the keyboard is good, if not better than many wired options. He also says that the keyboard offers up 30 hours of battery power with full brightness enabled.

The main focus with the Logitech G G915 was to design a keyboard that offered up the low profile look while also delivering in performance. From my short time with the keyboard Logitech seems to have done it. Starrett says he challenged the designers to “take every millimetre of spare space away”. The keyboard does just that, meaning something as silly as lifting it up and shaking it delivers minimal sound. It also means the click echo is lessened slightly. So you’re working with a super slim, quiet board. Logitech G has also ensured it is available GL Clicky, GL Linear or GL Tactile switches, to suit whatever you require. It is an incredible piece of gaming engineering up close. I’m a fan of the low profile high end look.

But what about South Africa? 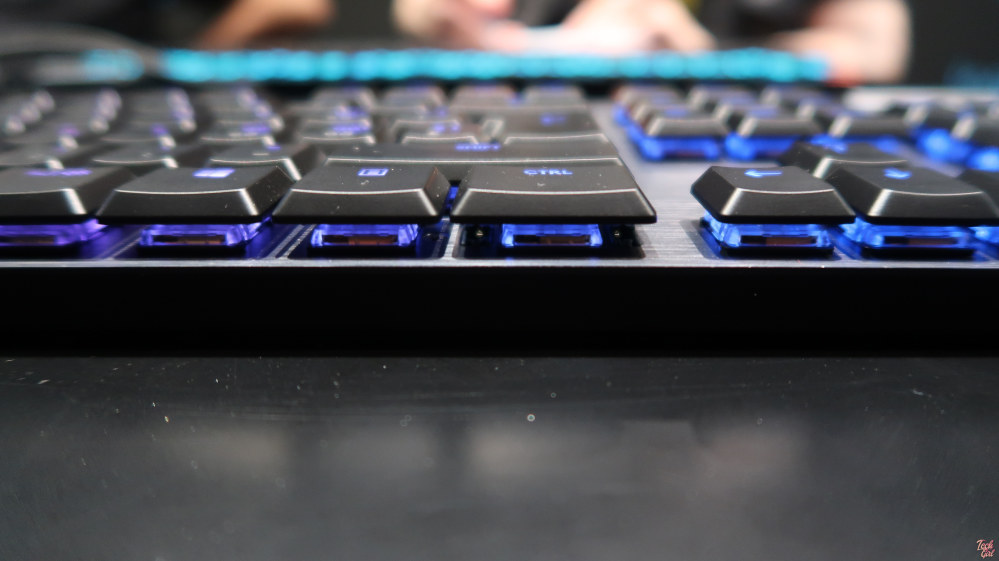 This is always the difficult one – getting the latest peripherals to South Africa. We talk about all the cool stuff but actual arrival is always a problem. Unfortunately, the G915 is going to be tough to get in. The G915 is coming to South Africa but because of the wireless capabilities it needs needs to meet certain compliance requirements locally, which usually takes a ton of time and paperwork. It’s the reason new wireless peripherals seem to arrive late here. Because of said requirements, the G915 won’t be expected in South Africa for the next year.

However, it isn’t all bad news. The Logitech G G815, which is the wired version of the keyboard is on its way and should be available in retail in December, for around R3199. Now would be the time to reach out to your favourite online retailer and ask them to book you one when they arrive, because they’ll likely move fast.

Disclosure: I’m partnered with Logitech G for the next few months and they funded my flights and accommodation to Gamescom so I could bring you this news.