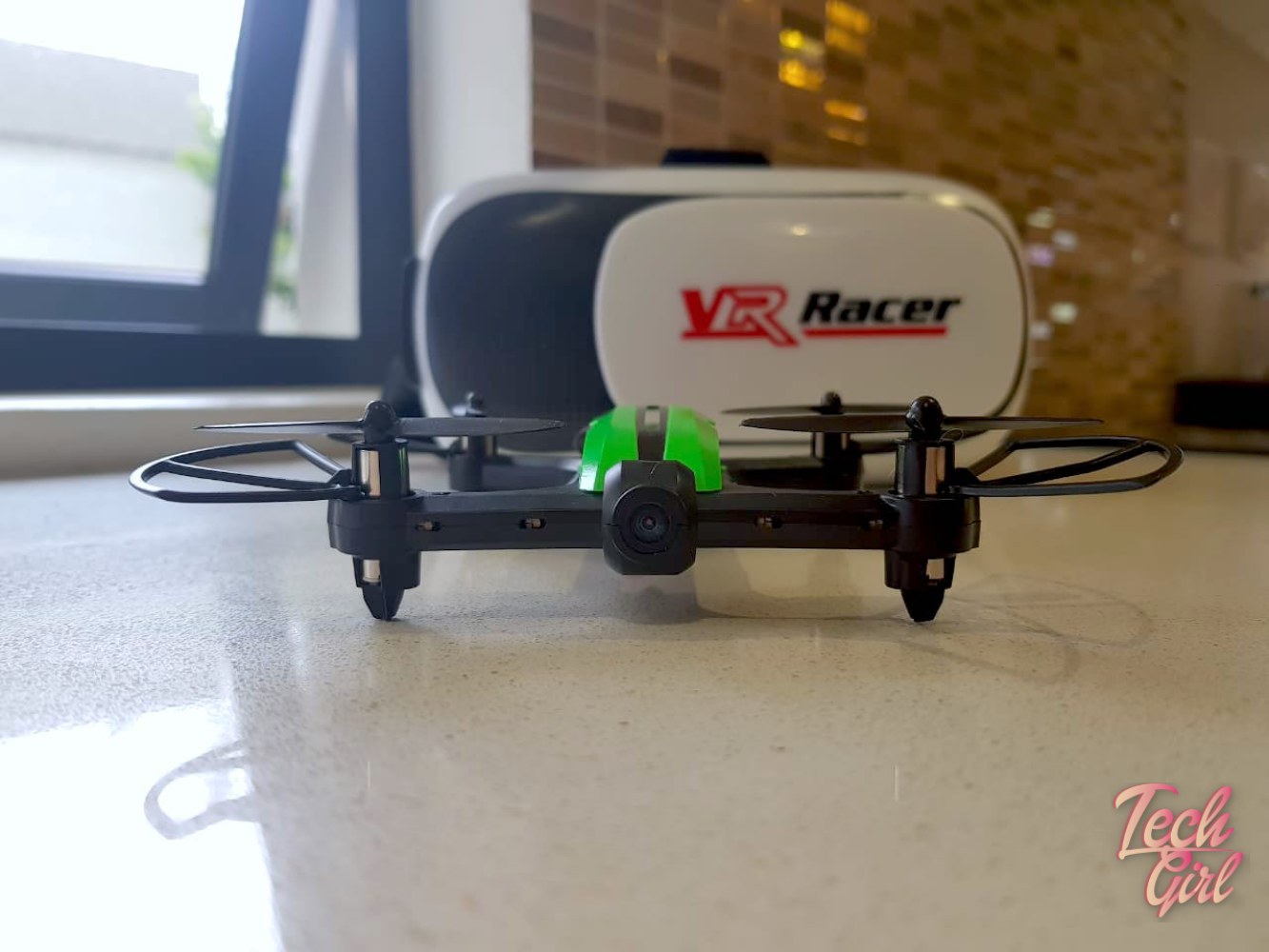 I’m a big drone fan. Like really big. Unfortunately, I don’t actually own any “proper” high end drones for obvious bad flying reasons (read: I can’t afford the ones i actually want!) So when Syntech contacted me asking to review their latest VR Racer drone, I jumped at the chance! Who wouldn’t? 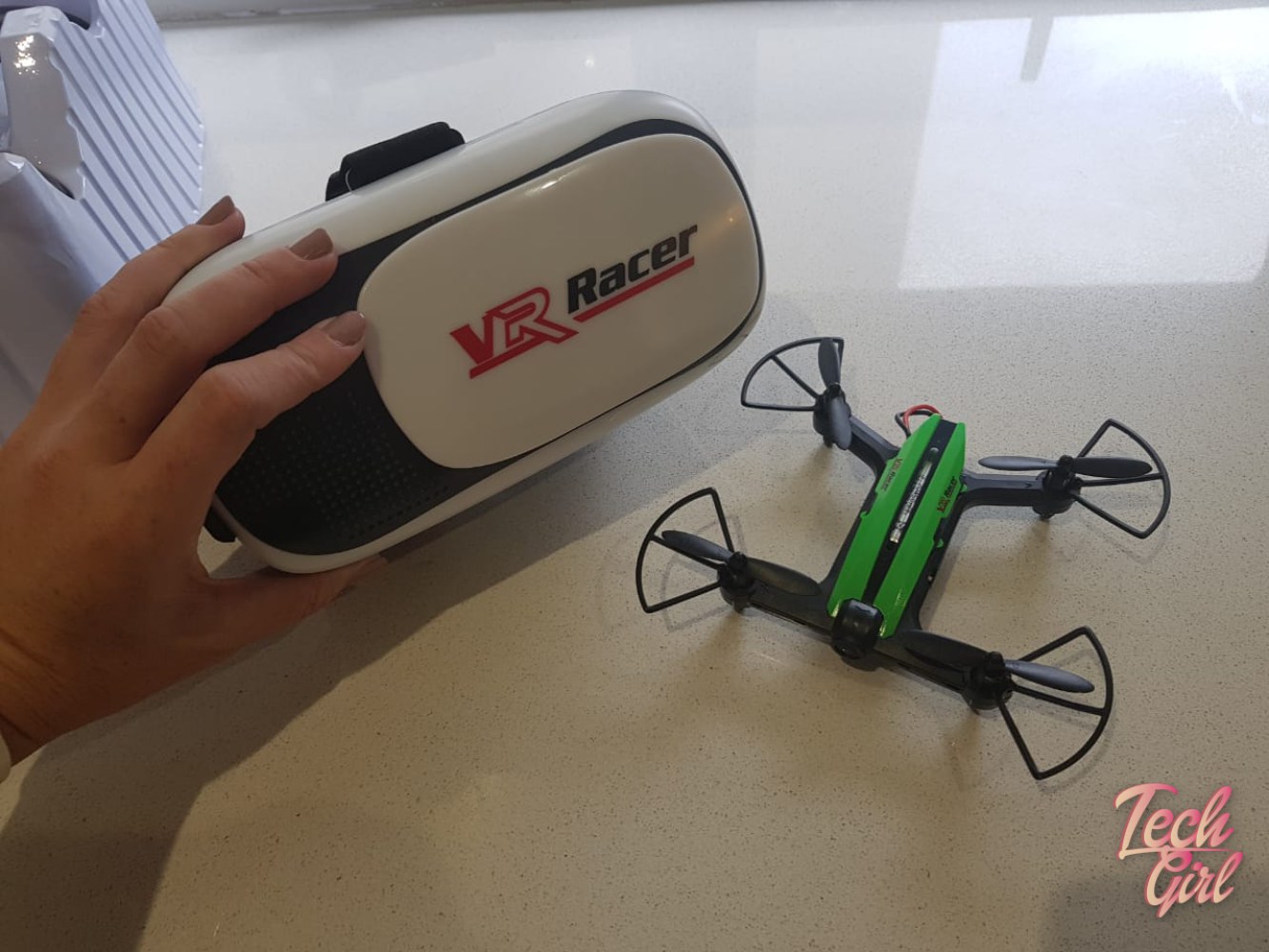 While you may be thinking “uggggggh not another review…” Let me clarify by saying that I’m not going to go into technical analysis and all the pros and cons of the Helicute but rather tell you a story of my excitement, followed by inevitable disappointment, a moment of self realisation and the proceeding chaos that ensued. Spoiler alert: It was glorious. 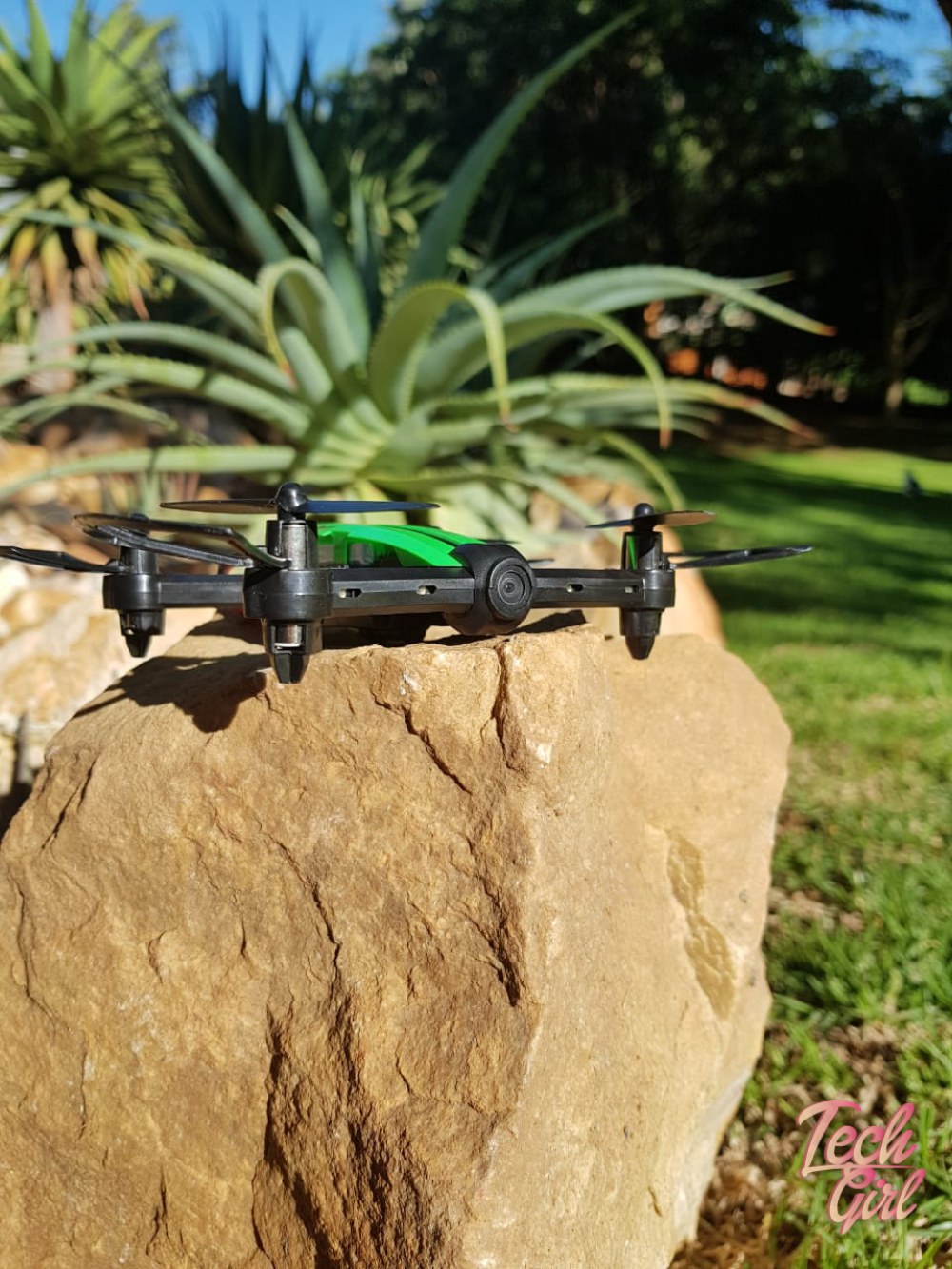 I don’t usually get drones to “review”. This is likely because drones are expensive, I’d crash them and returning a broken product is likely not a good sell for the brands handing out review products. When Syntech dropped off what I assumed to be a DJI equivalent I was, quite franky, bouncing off the walls. It was why I made such an effort to cancel work for a day and fly to Cape Town for the this drone launch. Granted, that was very much a look don’t touch event and I flew home (on my own dime after a flight booking mess up) somewhat disappointed that we didn’t actually get flying time. 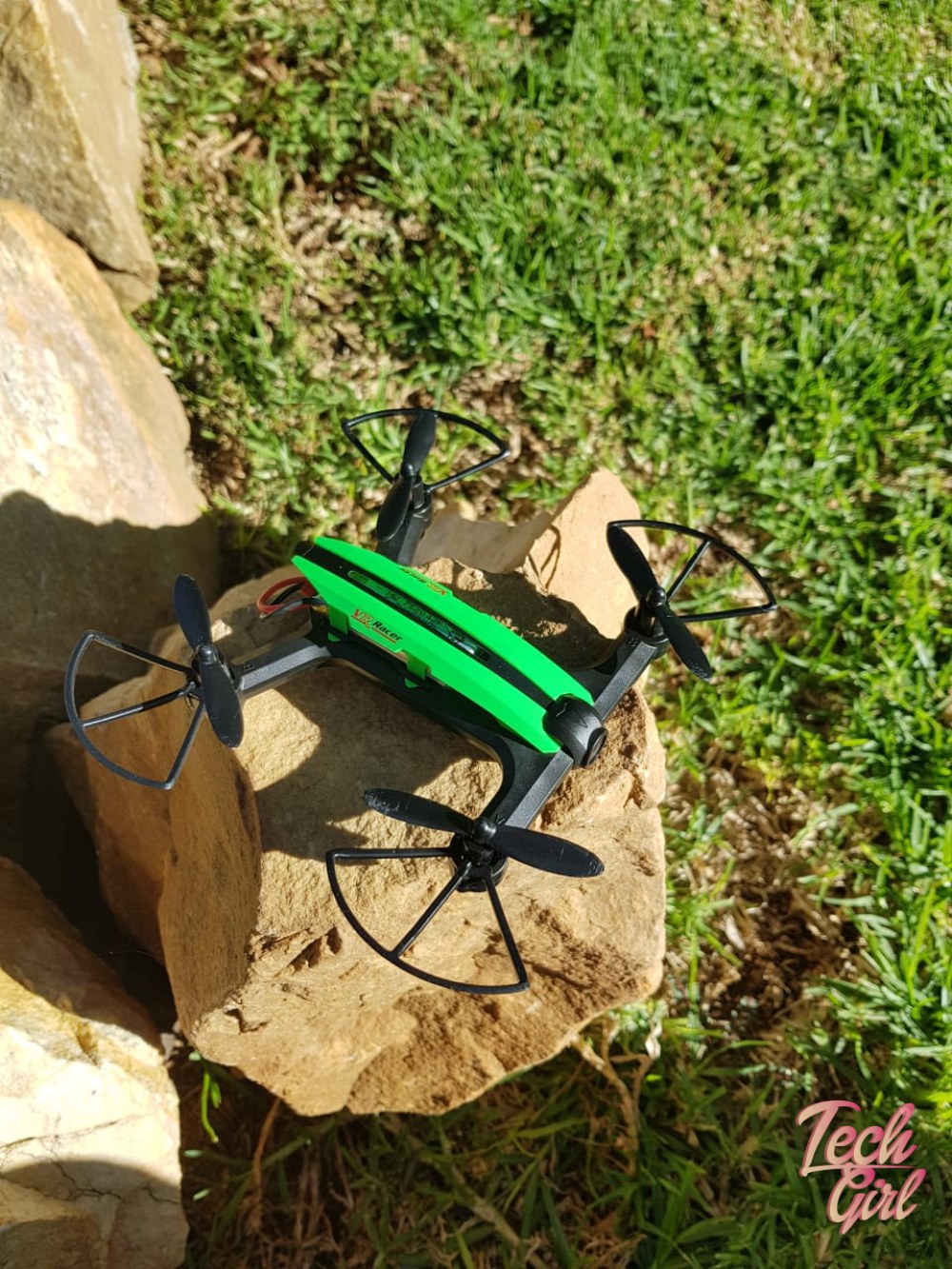 It is around this point, following the reminder of that trip and the subsequent unboxing of a new gadget, that disappointment hit. Out of the box came two plastic boxes. The smallest of the two turned out to hold the drone. And it was not what I was expecting. Bigger than my hand, yes, but not exactly what one has in mind when they think of a drone. When the controller, VR headset and starter’s guide is bigger than the actual product, it’s hard not to feel somewhat let down. But I’m a glass half fill type of girl and quickly realised a small drone means less chance of flying into things. Right there you can begin to understand how much fun can be had with a drone this size. The VR headset is a funky touch but wholly unnecessary as your phone can be fitted on to the controller that displays the view of the drone. Yep, this little fella has a camera on board. But don’t expect the crispiest of images. All in all, you’re set for a solid 10 minutes (or 20 if you pre-charge the extra battery) of pure childlike fun minus hardcore content creation. 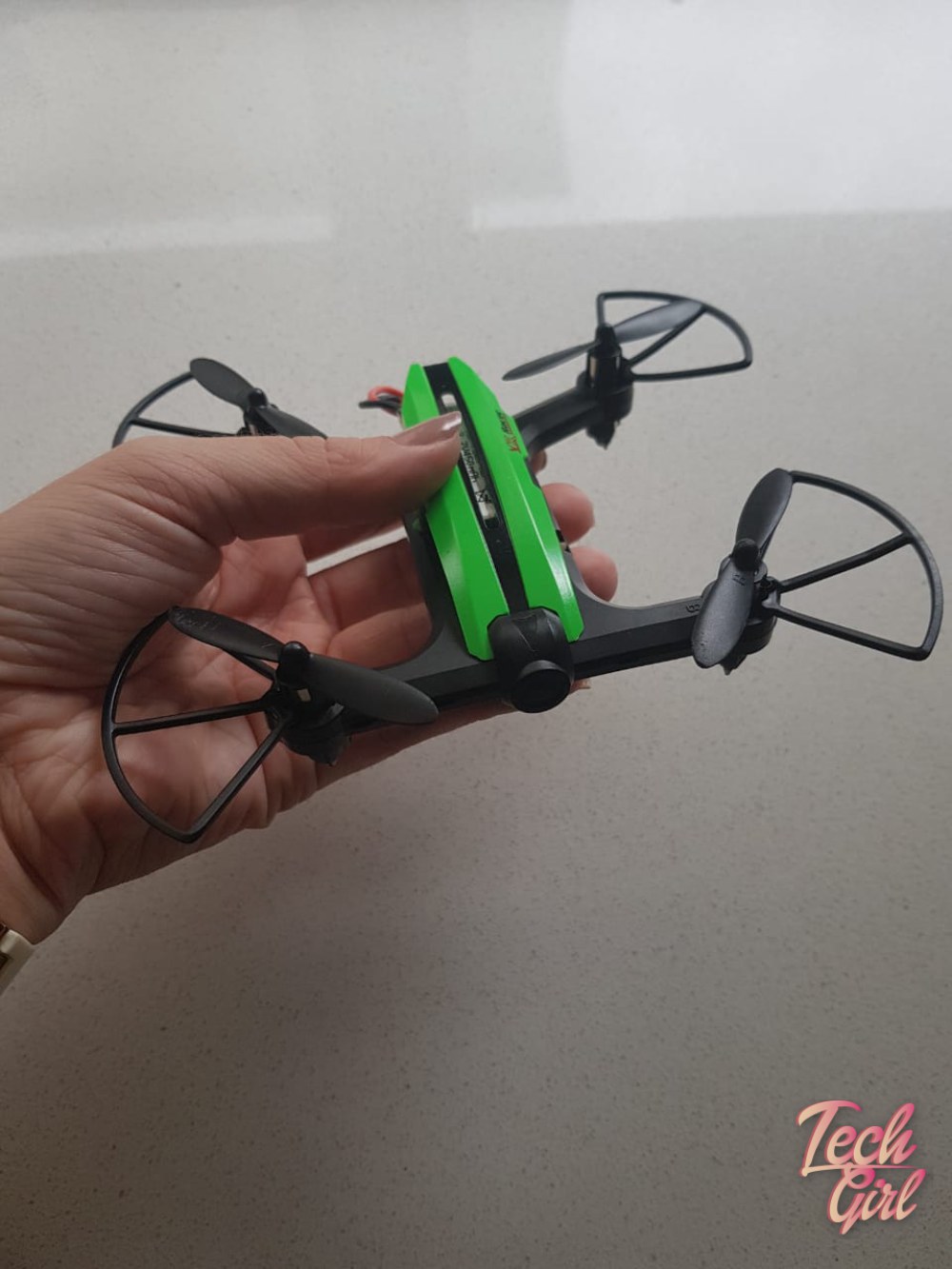 It is worth mentioning the ease at which this drone operates. In comparison to previous itty bitty drones like the Parrot, which I’ve flown, the Helicute is smooth, stable and goes exactly where you want it to. Although I was not brave enough to test it in the wind, this little guy is perfect for exploring your home (and even inside to get a different perspective!). The extra blades made me feel much more comfortable when I tried that particularly tricky 360-backwards-rolling-hairpin-manoeuvre-thingy. Spoiler alert: The ornament won that particular battle.

With a few blades broken, many recharges later and endless squeals throughout the afternoon I can, with certainty, declare myself an expert at all things drone and give you a complete and thorough conclusion: 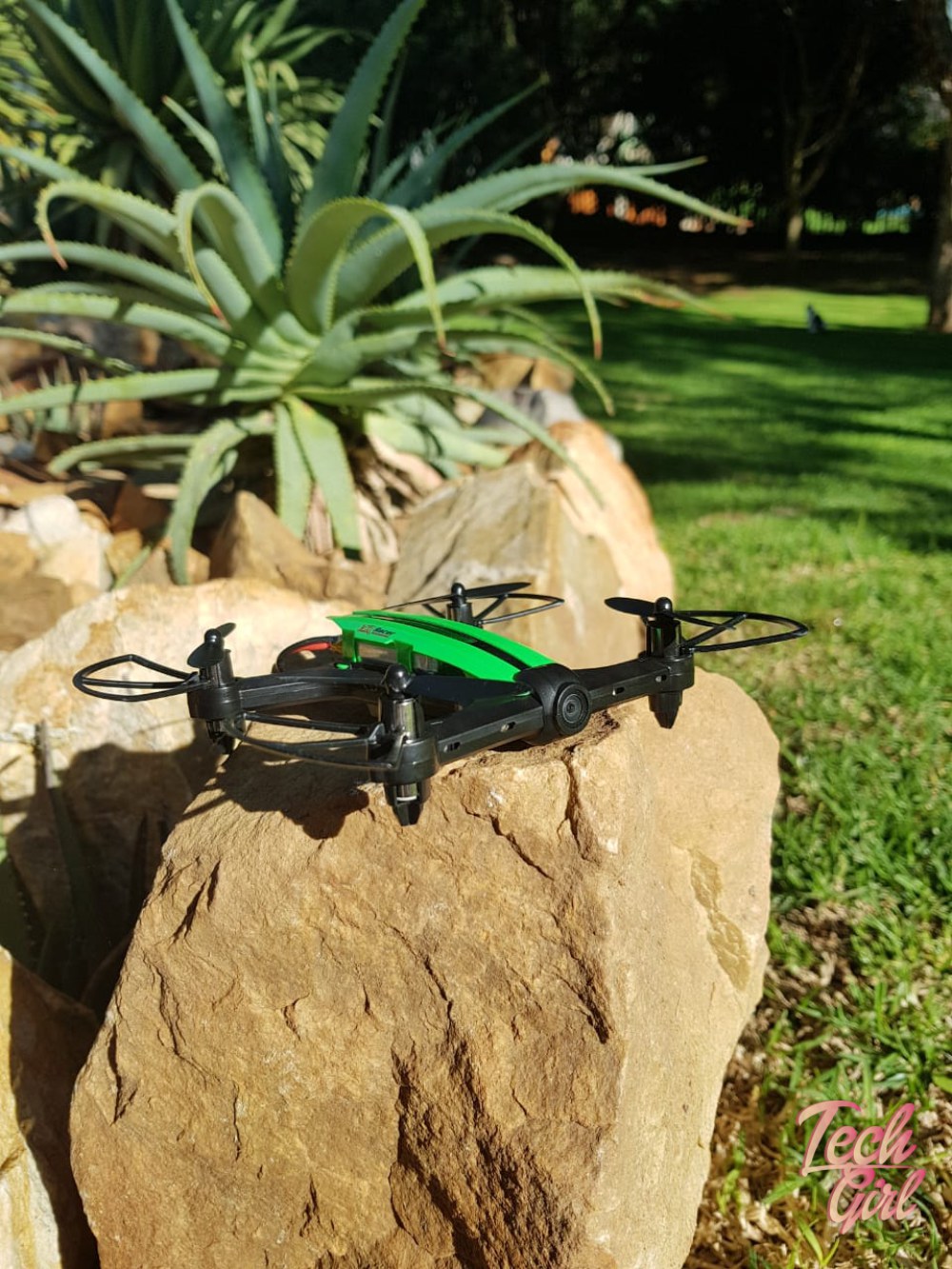 At the end of the day, the Helicute is not for those RC connoisseurs or for the video guru looking for that magical shot. It’s for the 13 year old girl or boy just looking for some fun. It’s for the 28 year old lady/man looking to act like a child – and shedding some tears when you break all your things. It’s an ideal toy. Do not, for a minute, think this is a tool for content creation. You’ll be disappointed. But hopefully looking at the box will confirm that for you before you even try fly it. If there is one thing I’ve learnt from the Helicute, it’s to make sure you don’t judge the drone by its size or packaging. This little drone will set you back around R2499. Might be worthwhile if you just want to play rather than perform.

Disclosure: Syntech sent me the drone to review. It is a review product meaning it is returned to the distributor after a period of time.