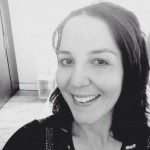 No, there is no cup like video here. But in true Tech Girl spirit we decided to try something a little bit different with the new HTC One (m8). Tanya is a mom who has to chase little fingers away from her screen, I spend most of my time dropping smartphones from the top of a horse. Two women one phone – how did it hold up to our five important tests and our very different demands?

We decided to review the phone on 5 key things: Style, Set Up, Software, Selfies and Some other stuff.

TANYA: I’m going to be honest and brave the potential onslaught and flinging of naartjie peels, but these days, unless an Android phone comes in an amazing colour, can be tossed my preschooler in the pool and survive, or makes a cappuccino, they all feel much the same. Yes, I could break down the specs and functions and find a wide variety of phones, but all I mostly look for is battery life, looks, speed and camera, and so many Androids are same-same.

That said, the HTC One M8 feels a little different – not only in hand, but in use.

SAM: I had my doubts about HTC. The One M8 is a gorgeous phone, no doubt, but you’ll remember the company was in SA previously and then they weren’t. Now they’re back. At a press event earlier this month I met Douglas Jewson, the country manager for HTC locally. He assured me that things are different this time and the smartphone brand is here to stay. I’m sure there are many an HTC owner who was left high and dry in the past with no local support who aren’t too interested in the lip service. For now I shall remain cautiously optimistic…. and review their new smartphone.

TANYA: It’s gorgeous with a very sleek silver body the gold and grey models look gorgeous too). The body is 90% metal, with a brushed aluminium finish.I was quite “proud” to be seen with this, and was equally impressed seeing other tech journos with their review phones out and about. I feel I have a medium-sized hand, and wasn’t able to hold and tweet or message with one hand on the go. This is a must for me as I tend to do some serious messaging and tweeting on the go (like when I’m running races). 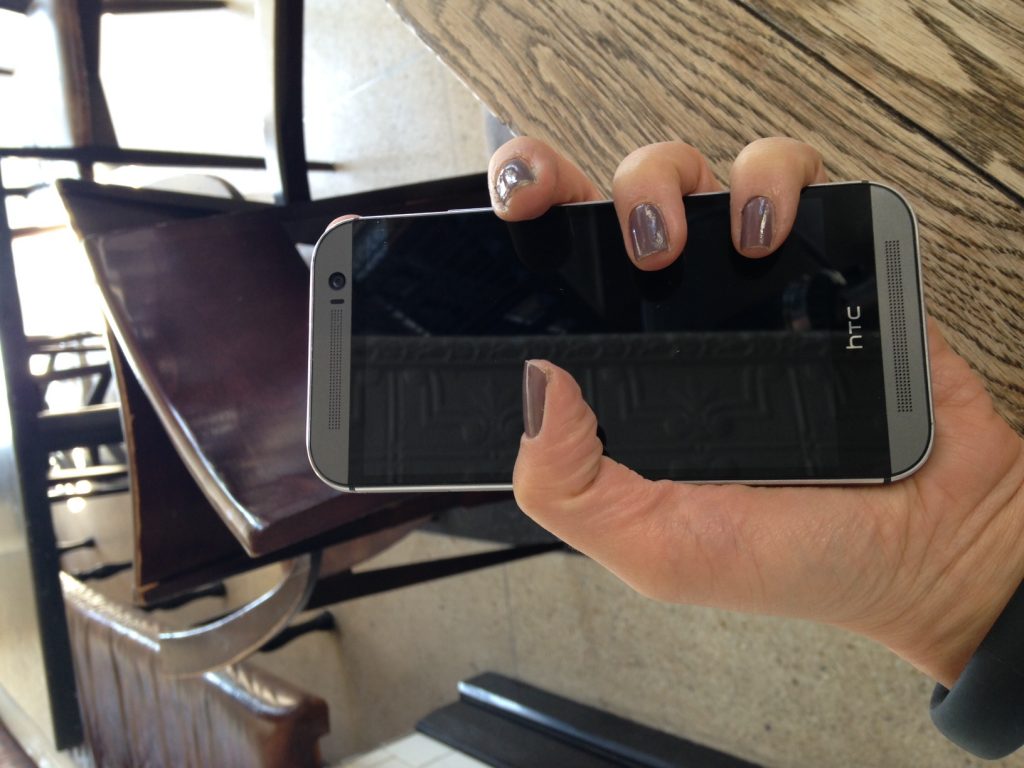 SAM: According to the presser the phone will launch in Gunmetal Grey in SA (that’s the colour of the review units we were given). I can only hope other colours will be offered up. With the phone’s aluminium brush finish I think it would look rather striking (and expensive) in a gold. It’s possibly one of the best looking higher end smartphones on the market. It also has a curved back, which is important for me and my tiny hands. Curved backs on phones with larger displays make it easier to hold, but it’s still a struggle to type one handed. Thus using my phone on a horse to reply to What’s Apps came to an abrupt end. 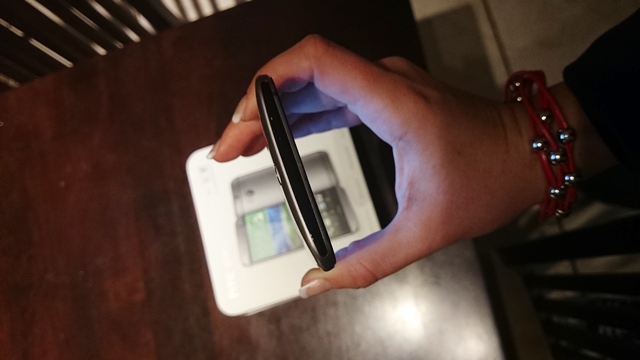 TANYA: The setup was pretty standard and easy for an Android device, and I always feel that once I’ve inputted my Google details, the phone knows pretty much everything and does everything.

SAM: So HTC offers up a clever little app called HTC Transfer Tool. If you already have an Android phone, load the app and it will sync with your new HTC device. Then watch a movie for a bit while your pictures, contacts, call history, text messages and the like transfer. Nifty right?

TANYA: What can I say? It’s Android and runs similarly to other Android devices I’ve tried. Could I access Instagram quickly? Yes. Could I peruse my ex bestie’s Facebook pics with ease? Yes. Could I email images quickly and painlessly? Yes. And could I open Twitter links without a time lag? Yes.

SAM: An Android phone is an Android phone right? I’m so not sure about this one. My pet hate is Android phones that arrive pre-loaded with a bunch of apps I don’t use. I forget about them until they suddenly start upgrading. Then I go through and start uninstalling. Which annoys me to no end. If I wanted it I’d install it. I’m yet to find a pre-installed app that makes my life easier as opposed to taking up my time while I remove it. The HTC One M8 does have a few extras that may make you pull a face but for the most part I found it less cluttered than some of the other phones I’ve used. 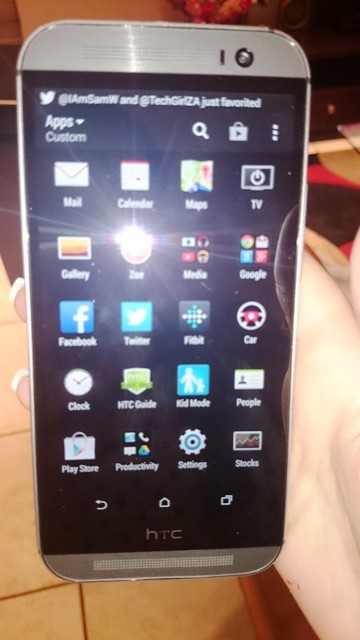 TANYA: Not all phone selfies are created equal, and the M8 shines in creating choreographed and edited pics. For starters, there’s a selfie mode and when you tap anywhere on the screen, a countdown timer starts, meaning you have a few seconds to create that perfect pose. There are also great editing tools, which include skin smoothing, lighting, face contour, eye enhancer, eye brightening (yes please – much needed as I always look tired), and anti-shine. 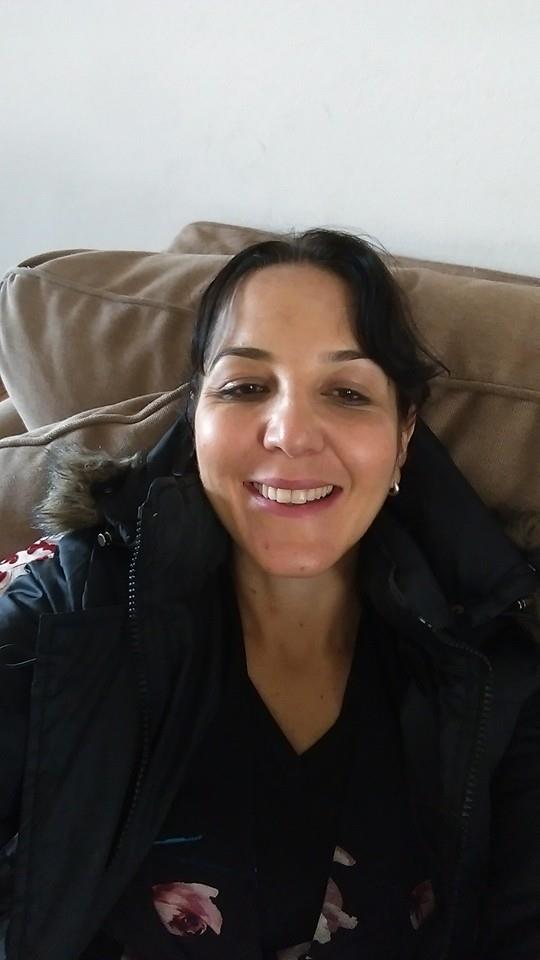 SAM: I really liked this phone… and then I took some photos. I think the M8’s camera really lets it down. I take most of my pictures outside and this camera does not cope well in sunlight. I’ve read reviews where people raved about the camera, but on investigating and looking at their photos it was because they were taking up close images in dark settings. Change focus to sunshine and me a bit further away on a horse and the pictures start resembling those of an old Blackberry. I was bitterly disappointed. The picture I captured with the HTC was probably one of the best ever (in that me and the horse look reasonably normal) yet it came out terribly. This is one example, there were many others. 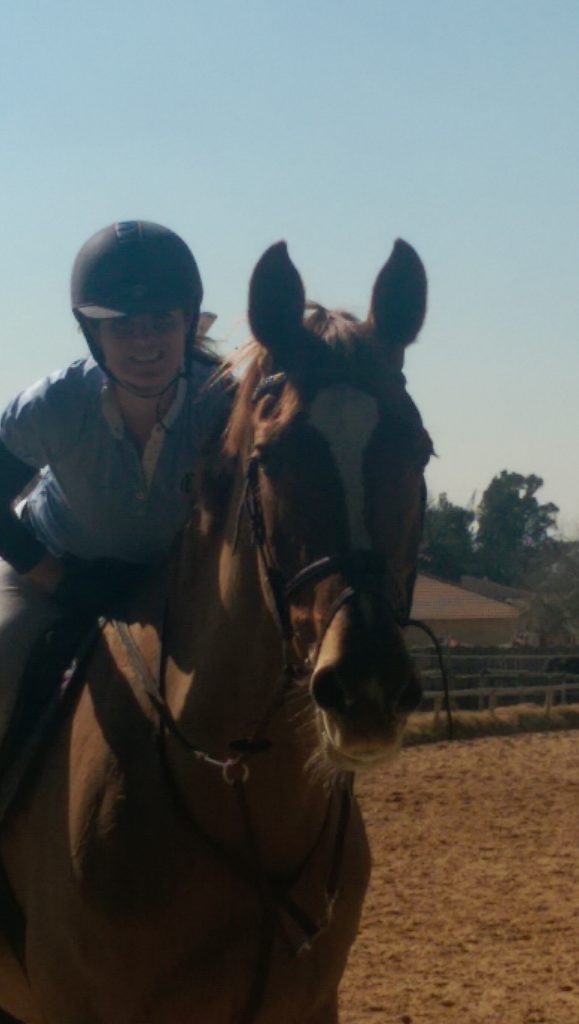 TANYA:  The M8 comes with Zoodles, an app that is almost a phone for kids, and is one of the best offerings for kids and parents that I’ve ever seen on any phone. Once you’ve set up a profile for your child, based on their age Zoodles will suggest apps and games, which you don’t have to specifically download. On the security side, you can block sites, set a violence filter, and even set a time limit on your child’s playing on your phone in Kid Mode (you can also set this differently for week days and weekends). Zoodles alone is worth the purchase or upgrade for any parent.

Another thing I liked was HTC Car, which uses voice activation to call someone, play music, or find something on the map while you’re driving. It’s a great safety function, and means you can still use your phone while concentrating on driving.

SAM: Big bonus for me? The HTC M8 One comes with a cover included in the box. The aluminium brush finish is gorgeous but during my day, there is a good chance it will get scratched. This was something small but something I hope other smartphone manufactures cotton on to. Too many of my phones end up looking like this. The HTC One M8 offered up the best speaker phone functionality of any phone I’ve used/owned/tried. I spend a lot of time running around, getting changed and multi-tasking. I pulled into the parking lot of Melrose Arch one night, left the phone on the back seat while I remained in the front changing my shoes and applying make-up. The person on the other end continued their conversation with me none the wiser that I was busy prepping for a date. They couldn’t believe, at the end of the conversation, that I had them on speaker. 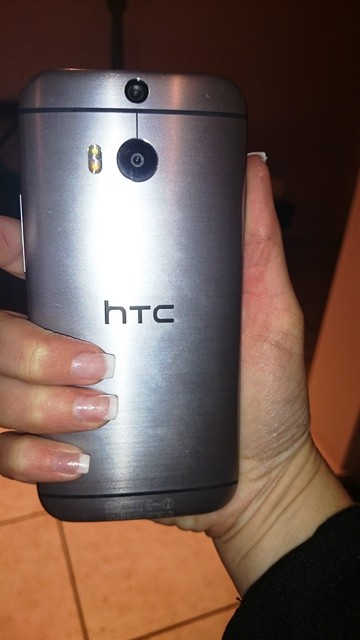 So overall? I might complain about the camera and Tanya wasn’t to taken with the idea that bigger is better but there is one thing we can agree on – this is the best looking Smartphone yet.

If we’re honest, we’re a sucker for a sexy face.

There is an update on this post and the HTC One that you can read here. 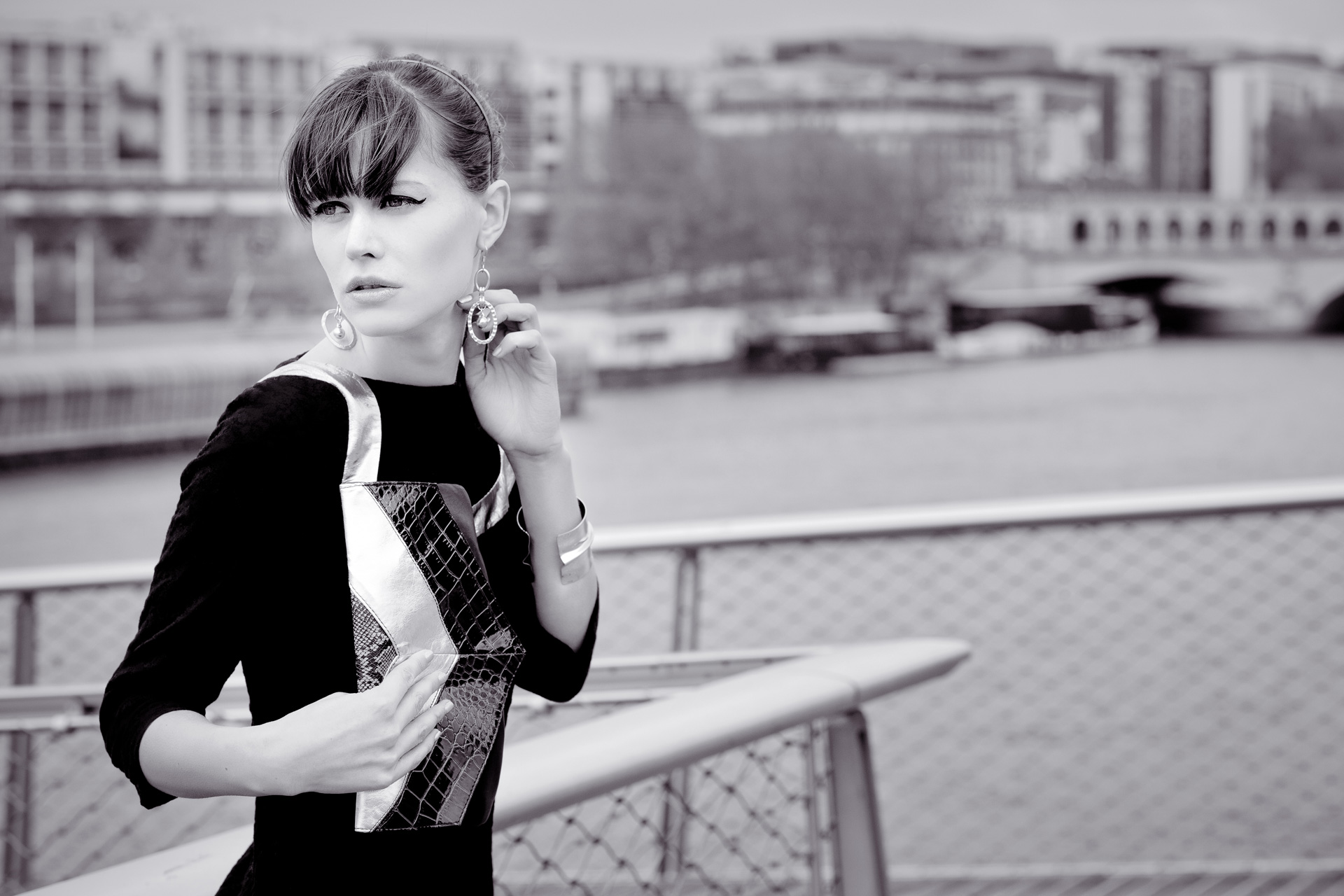 Technology Aimed to Enhance Your Lifestyle and Fashion Style