When I think “Jaguar” I immediately imagine my late grandfather in his poor boy cap, well pressed crisp shirt and neatly combed hair. A Navy man, there was something delightfully proper and British about him. He was the perfect gentleman but even in his last years still stood at his full 6 foot and strided out with purpose.

Jaguar, for me, is synonymous with wealthy old British men and a sense of class and sophistication. When the invite to test drive the new Jaguar XE landed in my inbox I presumed they had made an error but happily RSVP’ed a resounding yes to the test drive – I can only imagine my grandfather’s look of disappointment had I said no.

And then I met the car.

I say met because after the clever advertising promo starring the deliciously and somewhat delectable Tom Hiddleson, I can’t help but personify the vehicle.

The Jaguar XE is a sedan. It is meant to compete with the likes of the Audi A4, Mercedes Benz C-Class and BMW 3 Series. Now, I’ve had the chance to get behind the wheel of a 3 Series sedan and a few of the other competitors, while I enjoyed the experiences, I always felt like the cars were a bit “big”. The idea of a rising(male) suit driving them resonated more with me than a slight stylish PR type climbing the corporate ladder. My friend Anne fits that mold and she’d be drowned in one of them.

The Jaguar XE though? It seemed smaller. I want to say sportier but it seems like a cliche left best alone. For me, the XE had a tight rear much like the ones attributed to the generalised female example I used above, who spends a considerable amount of time perfecting her squats in the gym. When you get behind the wheel you don’t feel like you’re driving a big long sedan and you definitely don’t feel drowned by spacious interior – despite it being there.

I’ll get to the design and the drive in a bit. I’m not going to pretend to be a vehicle expert and my explanations might be poo pooed by car fanatics… so before you roll your eyes, let me talk about the things I do know:

The tech in the car

The Jaguar XE offers up a few tech additions that will interest you. While they aren’t mind blowingly innovative or exciting they’re functional and make for a better drive. I’m far more impressed with functional than shiny buttons. Talking about shiny buttons, there are very few. The in-car tech is housed in a central touch screen interface with a mere 8 buttons surrounding it and a few buttons below. It’s a simple and straight forward layout that I was able to figure out in a matter of minutes, while driving, after the GPS was required when my co-driver misread the printed map we were handed at the start. There is also a few familiar knobs to adjust temperature and the like if an older friend or family member is playing passenger and the thought of a touch screen terrifies them. A good few controls also find their way on to the steering wheel to ensure you spend less time fiddling with the touch screen and more time with your hands on the wheel and eyes on the road. 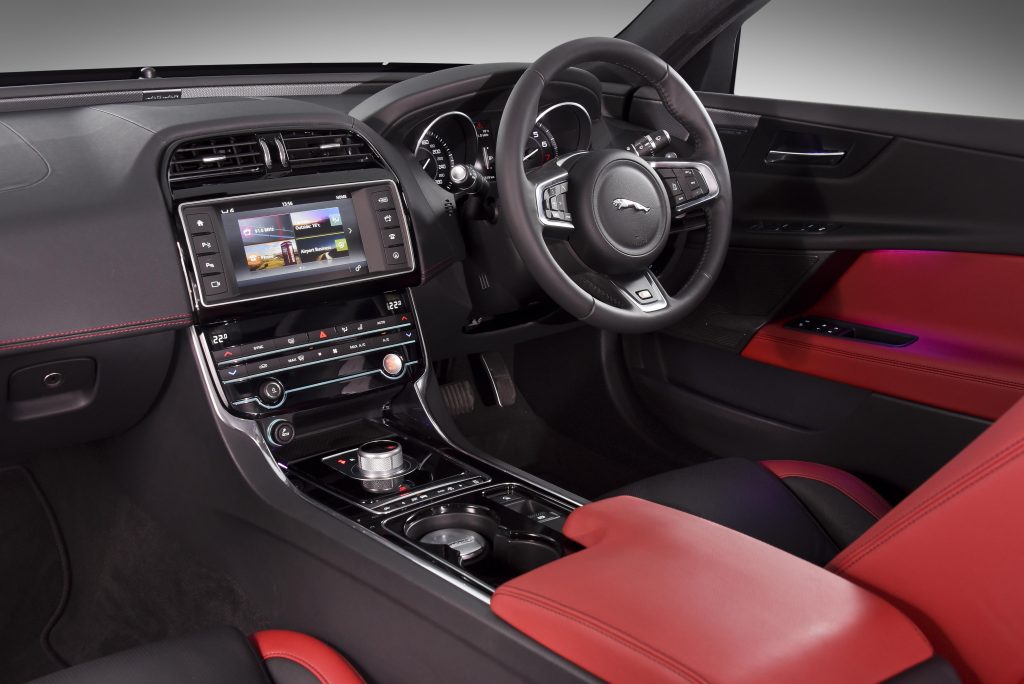 I especially liked the automatic gear selector. It lies flush on the central console until the engine is switched on – at which point it rises up and you can select drive, park, neutral and the like with a simple turn.

All Surface Progress Control: This is a new feature in the Jaguar that allows for low-speed traction in adverse conditions. It allows for safer handling and vehicle control on icy roads, wet grass or gravel roads. Let’s be honest, anyone driving this car along dirt roads should be shot and the chances of you hitting icy roads in Africa are slim. However, anyone who has cruised along a Johannesburg highway after the first summer thunder storm can appreciate that a vehicle capable of handling that slick wet layer is going to make you feel a little bit safer and far more secure.

Laser Head Up Display: A nifty feature that provides images that appear to be in front of you embedded in the windscreen and in direct line of site but without obstructing your road view. The Display shows speed and cruise control settings without you having to look at the dash or glance down. I test drove the Jaguar XE in Cape Town and the Head Up Display’s visuals remained crisp whether we were watching the sun rise over Stellenbosch, driving through the Paarl mountains at midday or watching the sun begin to dip over Cape Town in the late afternoon. 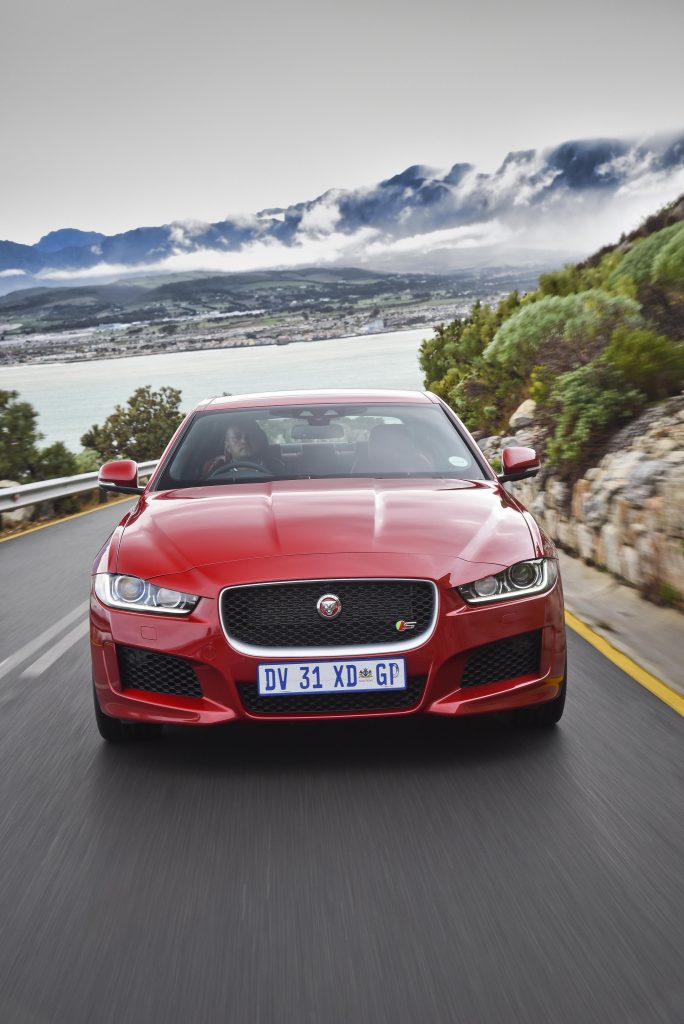 Blind Spot Monitoring and Closing Vehicle Sensing: a small flashing icon in the side mirrors alerts you to vehicles that may be in your blind spot or advancing on you quickly. Despite the add on I still found myself relying on, well, myself, to check said blind spots.

Automated Park Assist: It’s becoming a staple in most cars these days and I can’t really say it was any better or worse than others I’ve used. Though, if I’m completely honest, I relied more on the helpful Jaguar professional directing me in to a tight spot at the Shell Ultra City more so than the car. Despite running a tech blog I still have my doubts about the accuracy of machines.

Stereo Camera Technology: The Jaguar is equipped with a 3D camera that is able to “see” and identify road markings in the road. If the vehicle senses you leaving your lane or drifting across a solid white line when you aren’t supposed to it will notify you by vibrating through the steering wheel. The Camera Technology also  can be used to control your lights. While we couldn’t try it out as we didn’t drive at night, it is said to let you run high beam lighting on dark roads and then sense when there is oncoming traffic and dip it accordingly. I drive alone late at night at least twice a week so this appealed to me. The smart breaking feature also utilises the Stereo Camera tech to scan the road ahead. Again, technology we’ve seen before and yet, technology most drivers don’t use nearly enough.

I had the opportunity to drive the Petrol, Diesel and Petrol S versions of the Jaguar XE. Obviously my favourite was the super charger. It roars to life on the straights and the steering is sharp and precise – for someone less inclined to zoom around bends I found myself trying to up the speed at each corner – because it just felt that good. With a 3.0 litre V6 engine is goes from 0-100km/h in 5.1 seconds (250kW & 450 Nm). Top speed sits at 250 km/h.

The real star of the show here is the Diesel though. I found the vehicle to be quick but was rather impressed with the fuel consumption – you’re looking at 4.2 litres per 100km. It powers off when your toe brushes the accelerator but is as glorious to drive in peak hour traffic. Jaguar has focused on creating a far more “green” engine. There’s a lot of car speak here that I’m not even going to try to pretend to understand but, what it means, is that the cost to run the vehicle isn’t going break the bank. If I had one complaint I did find that when you slow down and the car needs to shift down gears it seems to hang on to the higher ones which I think is directly related to that green engine I mentioned. I only really felt this in the petrol though and not the diesel or the Super Charger. Of course, it could have been my less than motor journalist level driving as well….

But oh so sexy 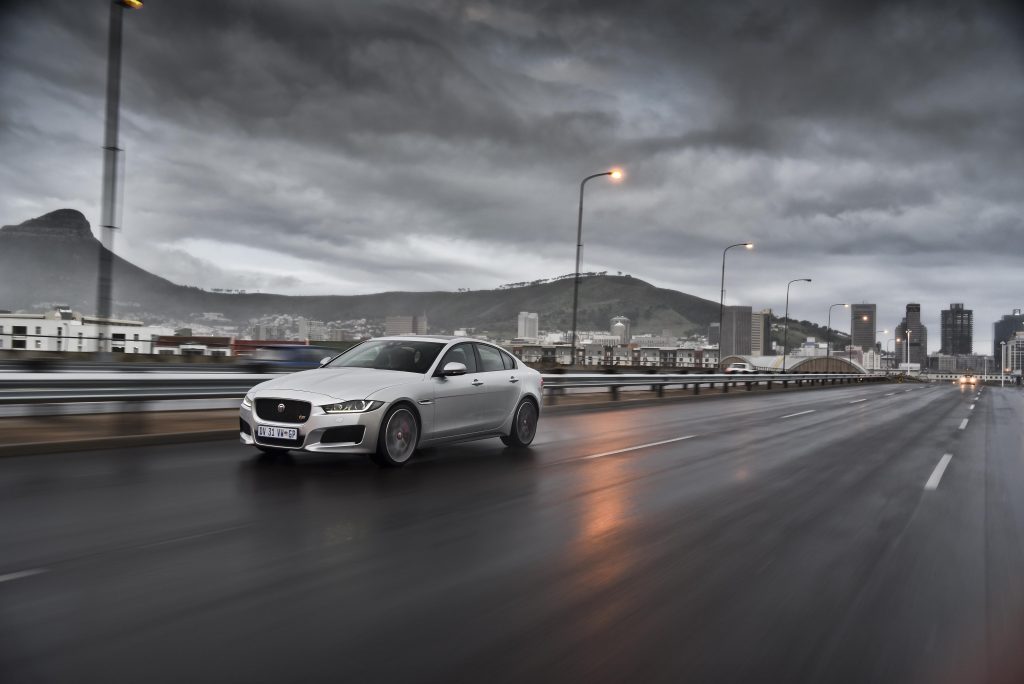 I think the Jaguar XE is gorgeous to look at. It is sleek and refined on the outside. It doesn’t scream class, it purrs it seductively in your ear. The interior is much the same. I’ve touched on the minimalist central console but I loved the rest of the design as well. Beautifully laid out the central console offers considerable space for phones, keys and two extra large coffees to go (the cup holders sit central between the driver and passenger seats and are easy enough to reach). Each finish is premium and elegant. However, the back seating isn’t very spacious and while the boot offers up enough space for your laptop bag, handbag and two over night bags for you to embark on naughty weekend get away, your monthly shop might be a squish. 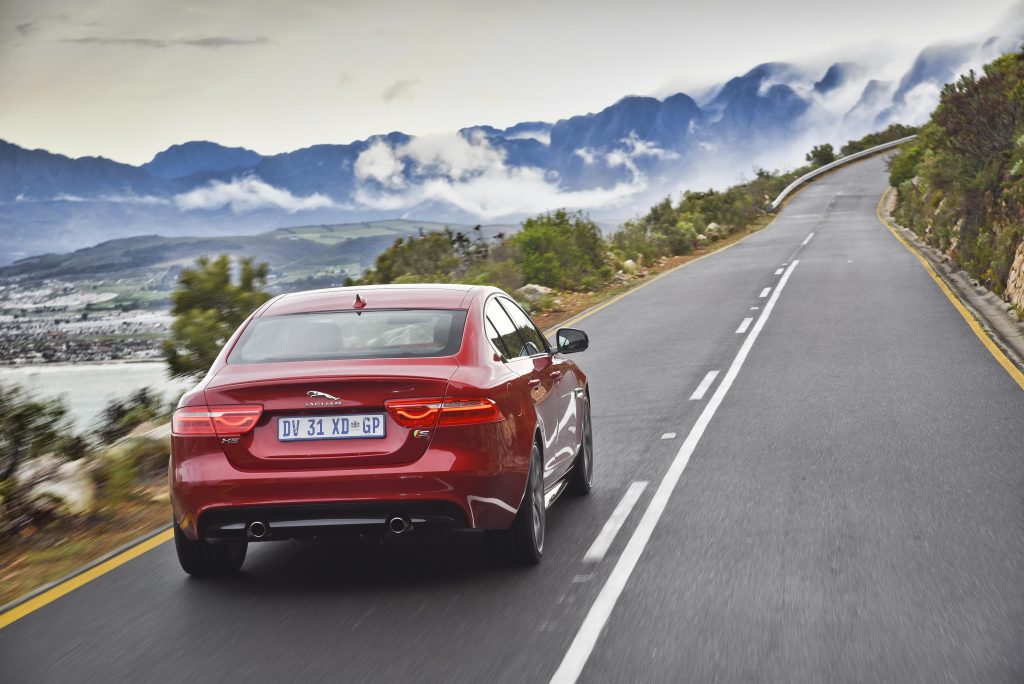 This is not the car you taxi the kids around in. Go buy your SUV. Or better yet, isn’t it time hubby buys the family friendly 4 x 4? Because this is the car that the successful female drives. It’s the car I imagine Samantha from Sex and the City would cruise around town or sit in New York Traffic in. It almost saunters along and never has to shout look at me because you’re already sneaking a glance out the corner of your eye. It’s gloriously sexy while still holding on to the British class I identify with Jaguar. It embodies so many characteristics of the woman I hope to be one day and is ultimately the vehicle I believe that woman aspires to drive. 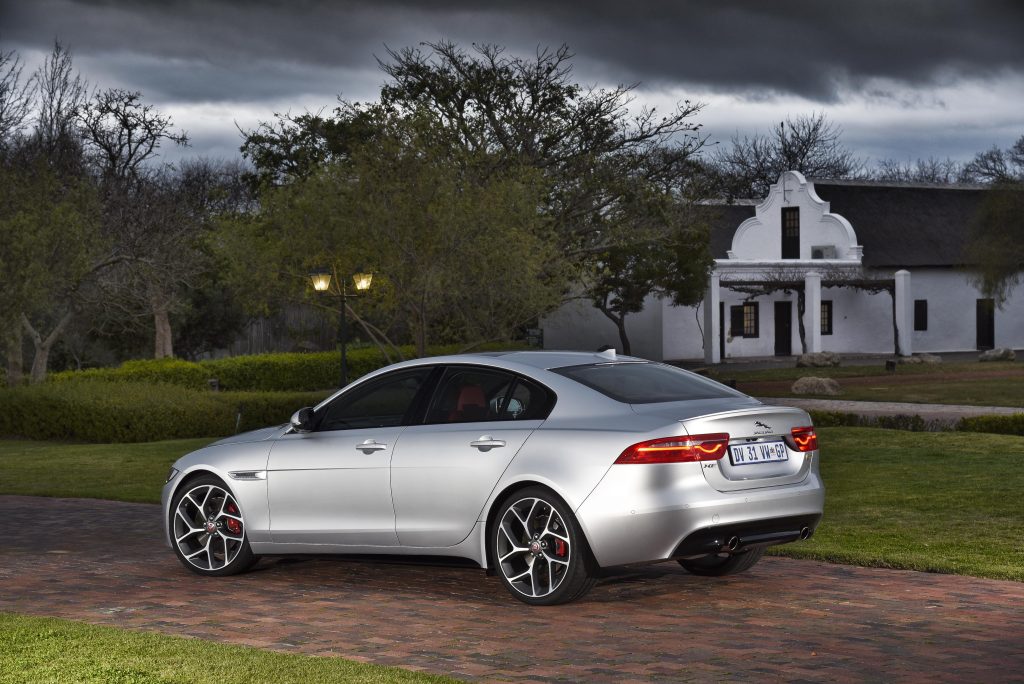 Deep breath – the Jaguar XE is going to cost anything from R524 800 all the way to just over the R900 000 mark. That pricing includes a 5 year 100 000 km Car Plan and a 3 year 100 000km Warranty. When you purchase one of these vehicles you also receive access to Jaguar’s 24 hour roadside assist and get to take you and a plus one on a half day Jaguar experience course. For more information head on over to the Jaguar website.

Images: Images in this post were supplied by Jaguar. Except the header and ones marked as taken by me. I’m rather proud of my photography skills this time around. To see some of my other snaps from the test drive follow @TechGirlZA on Instagram or @thatplaceinmyhead on Instagram.

Disclaimer: I was flown to Cape Town to test drive the Jaguar XE.