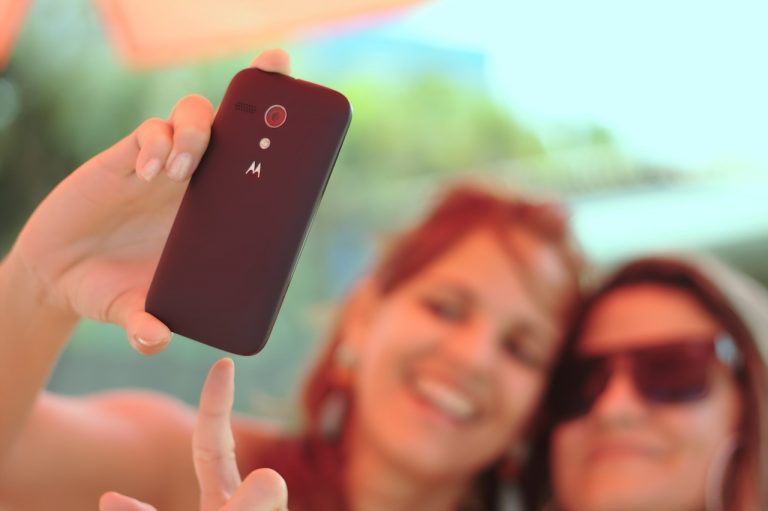 Is Instagram the new bleach? Is there subtle racism?

Many of the Instagram photos that I see daily are pretty amazing, everything is enhanced to look greater, everyone’s best pics are posted, the best angles are shot and food looks incredible. Instagram filters add a professional flair and I am personally quite a fan of the polarised look.

However, in the world of Selfie-gram (a lot of the time) some of us look like completely different people on Instagram, like…50 shades different (not the Christian Grey kind of way, no, 50 shades of colour different) and sometimes to an almost unrecognizable degree.

I have a brown skin tone, and when I use these filters I noticed that nearly all of them seem to only support making my skin tone lighter. Popular filters like Lark, Reyes, Amaro, Rise, Hudson and Walden result in highlighting blotchy areas on my face and whitening them. And yeah, I have used them all before especially in trying to achieve the whole polarised photography look but I can’t help but ponder on whether my followers are going to think I am trying to pull a Michael here (since I already have the moves down, Annie are you okay?).

For some better perspective on this let me try and make an example here, let’s take a real look at the options here for a dark skinned girl:

Normal pic without any IG filters: 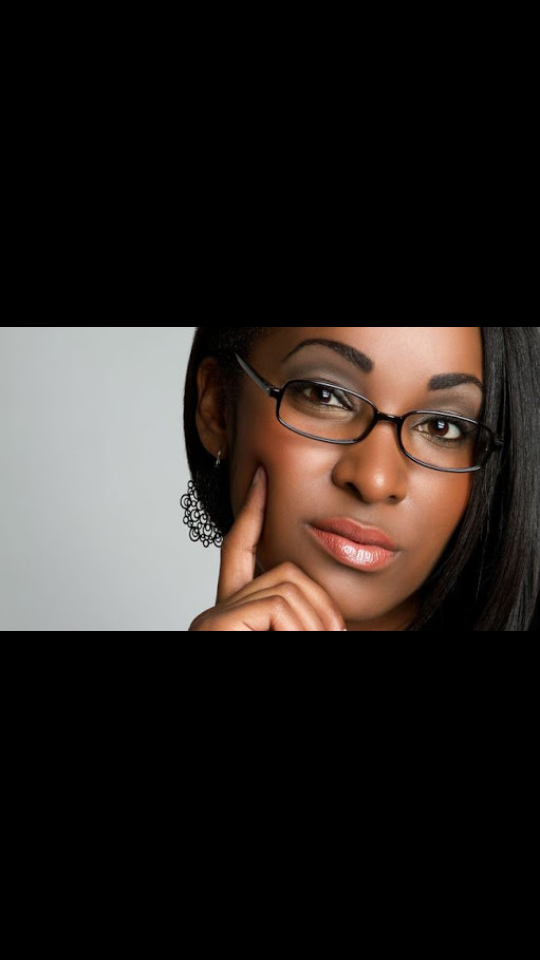 After adding a few filters: 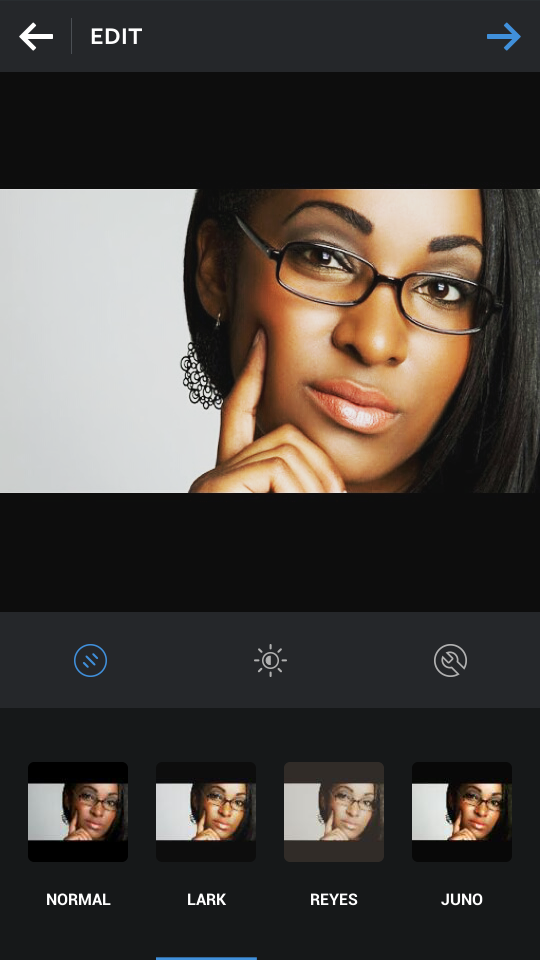 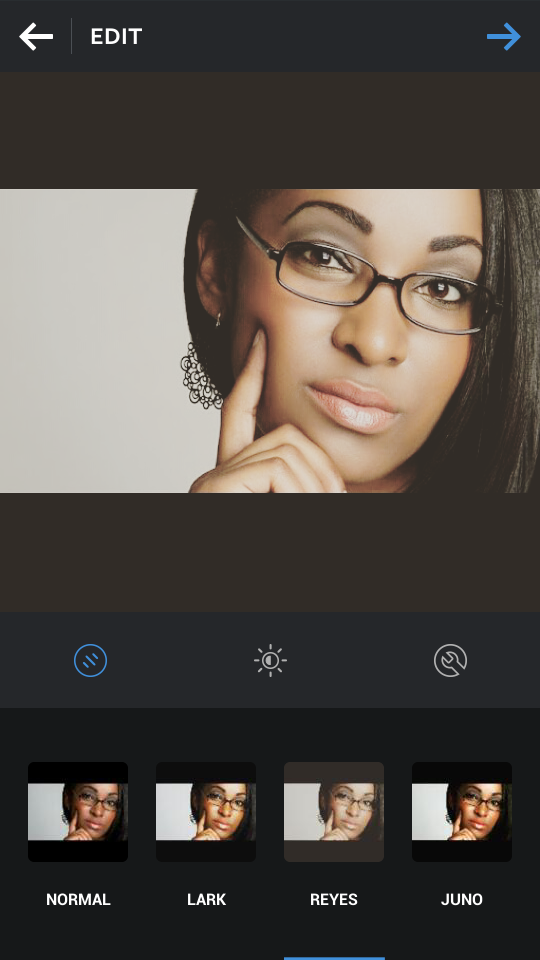 The first filter Amaro— completely white-washes the girl’s face and even changes her make-up colour to a matte effect and a nude lipstick.

The second filter Lark— highlighted the blotchy areas and lightened them, giving her a very yellowish washed out tone.

The last one Reyes— applied a “lighten and brighten” effect also mattefying the rich colours of the makeup.

I am no photography-guru and so the curiosity woke me up at some ungodly hour of the morning and as one would expect, I started lurking around the WWW for some answers. I needed to know why we’re all trying to desperately look like vampires of the 16th century or like discoloured victims of food poisoning.

After all, if Instagram aims at trying to beautify my images, what exactly is the general photographic idea of beauty? And with over 20 filters to choose from, all aiming to lighten my skin —just who are they in favour of here?

To my intrigue I happened to find that Photography itself has a pretty bold history of racism.

In Technologies of Seeing: Photography, Cinematography and Television, British Academic, Brian Winston wrote: “Colour photography is not bound to be faithful to the natural world. Choices are made in the development and production of photographic materials.”

So let’s pause to think about this for a second here- what is racism defined as?

Simply defined: An irrational bias towards members of a racial background.

Looking back to the 1950s, I found that Kodak measured calibrated skin tones in still photography using a reference card that featured “Shirley”, she was a white model dressed in high contrast clothing. Shirley was used as the standard for image processing in North American photography labs. This standard disregarded whether photo’s contained black people because Shirley’s complexion was treated as ideal.

And so as the photography world evolved for Kodak, it was built on a foundation containing an inability to portray or capture the different hues and saturations of black skin. This did not go unnoticed in the photography world and in 1977 one photographer named Jean Luc Godard actually refused to make use of Kodak on the grounds that its film was racist.

Guess what it took to finally pursuade Kodak to make some changes to their film processes to better capture the multiple hues and saturations of dark tones?

Yes— these industries complained that they struggled to accurately shoot dark chocolate and brown wood furniture. Shaken up by this most awful unjust feelings that an oppressed dark chocolate and a couch had……. Kodak then decided to improve their technology.

Okay, so let’s give Kodak the benefit of the doubt here just for a second and not be that quick to pull the “race” card out, I did ponder on whether perhaps given that it was the 1970s… maybe the technology was just under evolved to effectively produce the contrasts and beautiful hues of darker tones and skin colour.

According to polaroid film artist Adam Broomberg, black skin absorbs 42% more light than white skin. So for example, if you imagine a photograph of two women, one black and one white – and the photographer adjusts the light so that the black woman doesn’t resemble a dark blob with white teeth…. the white woman would then appear so white that the intensity will appear blinding.

So next time you take that one raw pic where you think you’re looking rather fair… think again, it’s questionable whether those 2MP front-facing cameras you’re using just as well can correctly accommodate the saturations of your skin… forget that #NoFilter crap.

So with a very cautious tug at the old “race card” I’d like to suspect that due to the above, it would take quite a bit of professional tweaking to produce accurate representations of skin tones in the favour of both contrasting dark and light colours.

My issue is, it’s 2015 now… we have a robot tweeting on Mars. Photography (and self acceptance) has evolved far beyond this, yet… we’re still trying to distort our images beyond recognition, to be fairer.

With social media being (probably) the greatest influencer on what we perceive to be “beautiful”, “cool”or”acceptable”, our washed out pics do seem to get more likes than others, so this must be because the audience perceives us as prettier when we are fairer.

And no this not new to any of us, it falls perfectly in place with the age-old societal indoctrination that beauty is associated to fair skin. I watched a Snow White play recently with my daughter and watching it as an adult, it became quite disturbing. I realized that it is doing a good job at teaching toddlers “Mirror, mirror on the wall… who is the fairest of us all”… and obsessively highlights the plight of a crazy witch obsessed with being the “fairest” and most beautiful to the point that she literally shattered to death.

Yes I am aware that there is a bit of historical language context that could be considered here i.e “fair” being used as a term of beauty, but try explaining that to a 4 year old and then having the main character’s claim to fame being that she is extra-ordinarily pale? A bit of an awkward overlap, right?

I left there thinking:

a) what was I thinking bringing my kid to watch this, bad parenting Lisa!

b) I freaked out because my 4 year old now developed a preference for skin colour (to which she was previously colour blind) and suddenly did not like darker animated characters and so chocolate barbie has been feeling lonely and she refuses to be the yellow Power Ranger.

Then we have years of cosmetic brainwash happening although they have become masters at making the whole “fairer is prettier” thing more and more subtle. Over the years we have witnessed countless black models’ complexions being distorted to appear lighter by white-washing them (Beyonce we saw you, well barely… lol). Skin lightening products are a gold mine and obsessively so in the brown skinned Indian and African-American communities. 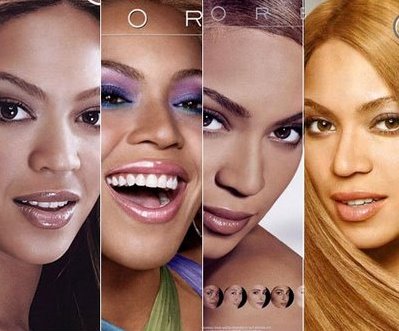 As a brown skinned girl, I am well aware of my fellow brown skinned girls who bleach their skin, risking chemical burns to get it lighter. Suddenly Snow White is just the privileged villain and we can empathize with the witch. Thankfully, our mirrors do not speak. lol

And so today we have Instagram to help make this white-washing effect a little easier (less “burny”) and so we’re obsessively lightening our beautiful darker shades of skin, just as Danity Kane’s Dawn Richards tweeted after being attacked by her fans for suspiciously bleaching her skin after a photoshoot- “Filter is the New Bleach”.

So what is it that am I trying to say here— let’s abandon filters? Nope. That’s a ridiculous request… we thrive on likes and comments and general interest from others in our lives— with some research even proving that filtered photos are more likely to be viewed than unfiltered.

I do believe that filters can be a really cool tool for enhancing your photographs, I just think there needs to perhaps be better options to choose from that are accommodating towards people of colour because there is a huge difference between filters that can be used to eliminate blemishes on your skin and those that place you under a new racial category.

On the other hand – WE are responsible for creating what is accepted as “beautiful” or not… we’re on the opposite ends of each others photographs giving away the likes, perhaps we need to also start to change the societal norm of “Insta” beauty and take the filters off our own eyes.

I am personally tired of trying to decide whether I am Jackson 5 Michael or like… Liberian Girl Michael. We should be proud and enhance our brown skin, showcasing the rich colours we posses because that’s beautiful too.