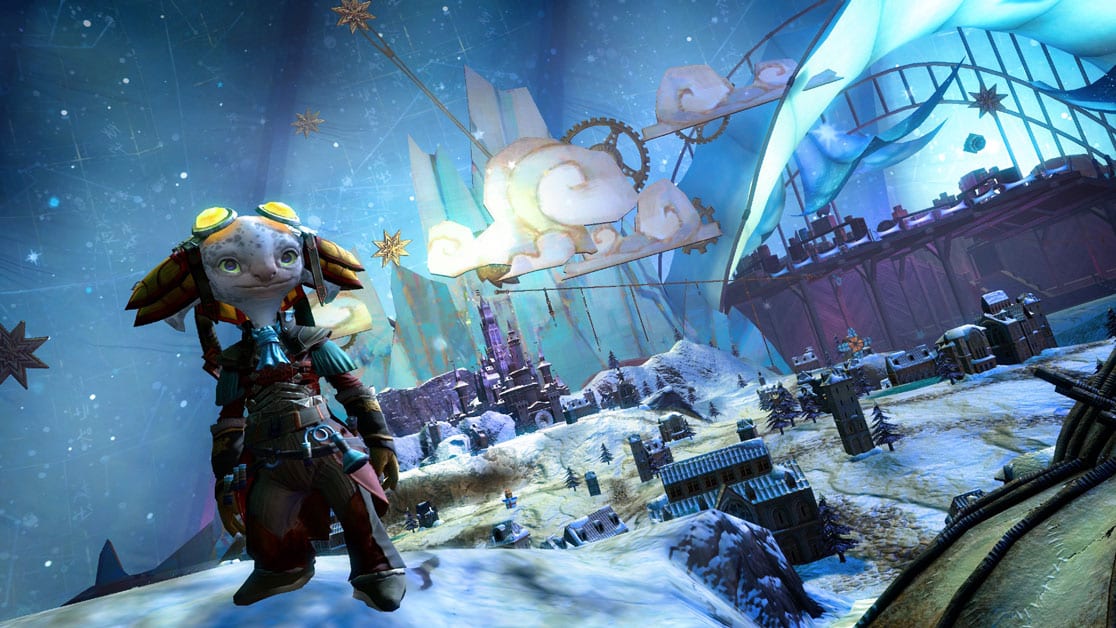 It’s that time again! If you frequent my articles here on the blog you would have seen that over the last couple of months I have made an active effort to try and do my bit to help get more South Africans into more ‘serious’ games’ by writing a collection of ‘for the absolute beginner’ pieces.

I started doing this because I looked back at not only my own but also my friends’ first experiences with serious games and realized that for a lot of people there is this mental ‘block’ when trying to break into the gaming world because they find everything to be overwhelming and feel like they’ve started a hundred meters behind, so they give up before they even really try.

Since I started these articles there was one game in particular that I wanted to write about, but because of how close it is to my heart I knew I needed to wait because the timing for this piece needed to be perfect, so when I walked into Starbucks last week and saw Gingerbread lattes on the menu I knew the perfect time had finally arrived.

The Festive Season is here. 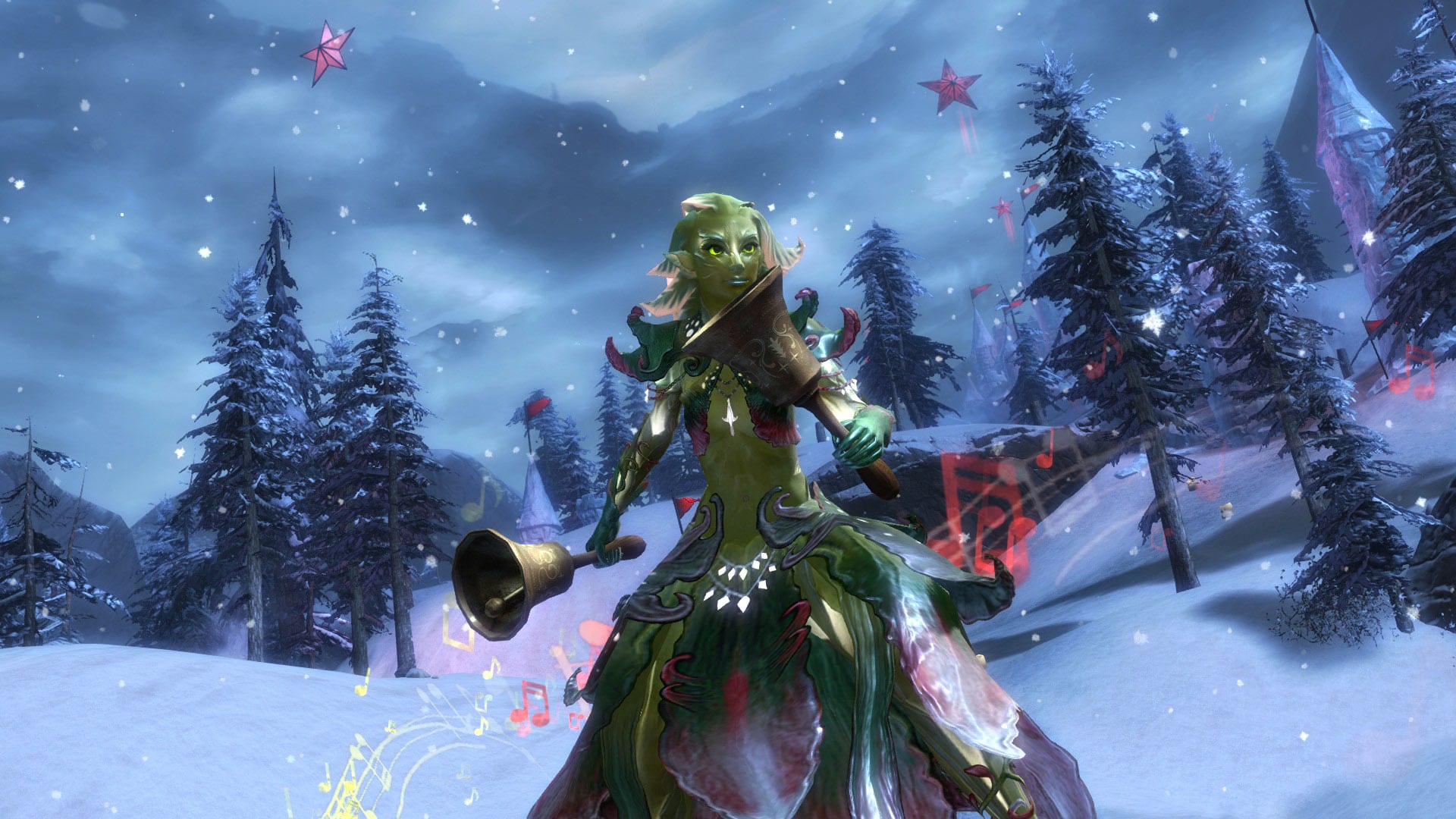 What I’m going to say next is going to make me sound like your grandma. Tough. This year just flew by. How is it even December already? I literally JUST took down the Christmas tree and now I need to put it up again! Okay Grandma moment over, but seriously, this whole year just passed me by at full speed, I feel like I didn’t get a chance to just relax and enjoy it, but while it’s been busy, it’s also been one of the best years of my life and I’m just not ready to say goodbye to it yet.

…and this is where Wintersday event comes in, and why it’s now the absolutely perfect time to introduce you all to the wonderful world that is Guildwars 2.

I present to you, How to play GuildWars 2 and ROCK your first Wintersday, for the absolute beginner. 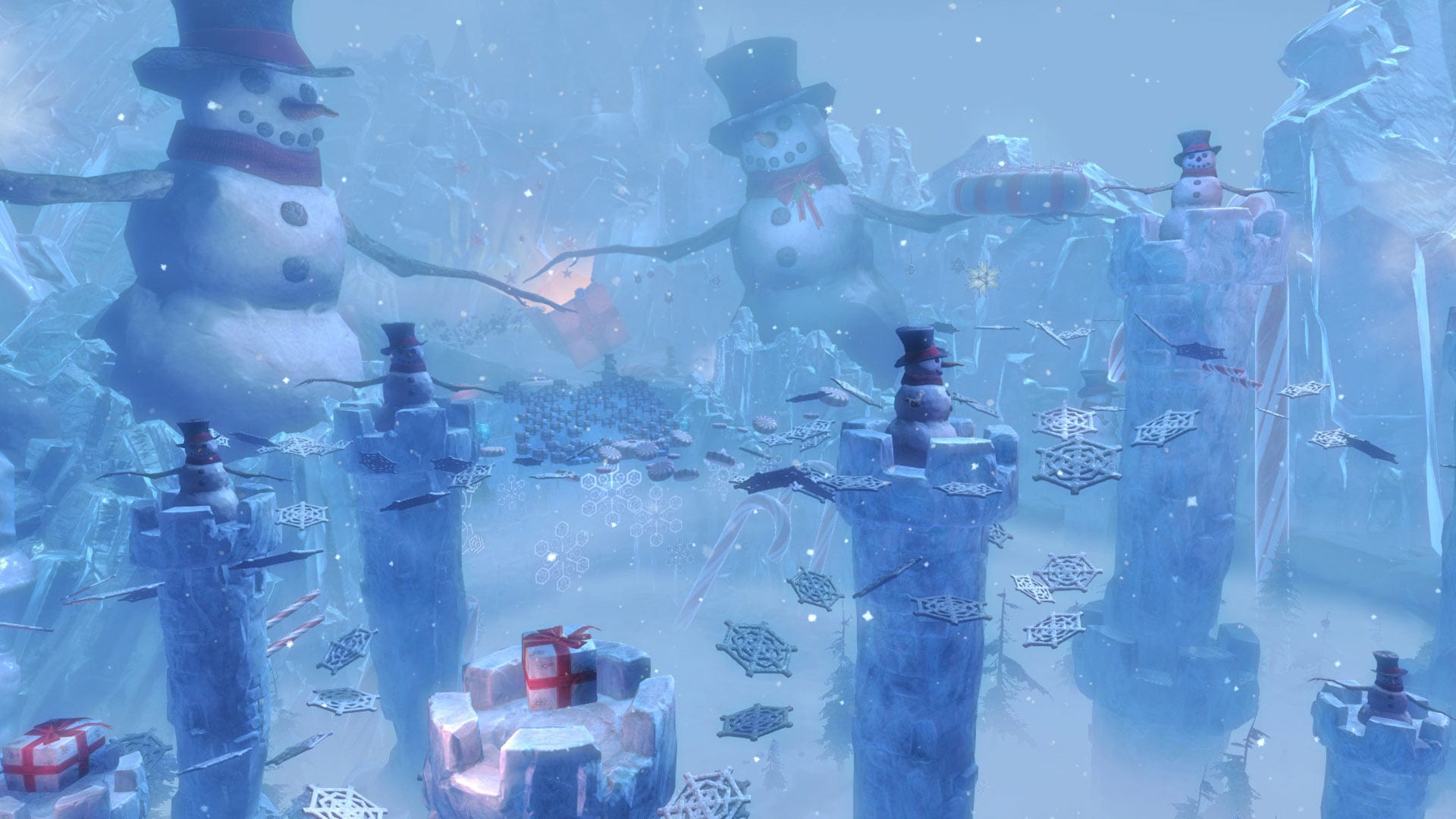 Let me start at the beginning and talk to you about what Guild Wars 2 and Wintersday actually is:

Guild Wars 2 is a ‘buy it once, never pay again and play it forever or don’t buy it at all and just play the base starter version for free’ MMORPG. If you’re wondering about the acronym it’s just the short way of saying it’s a ‘massively multiplayer online role-playing game’ that’s brought to us by ArenaNet.

Guild Wars 2 is one of the most popular MMORPGs around, and if you’re a fan of living in a virtual world with your friends, adventuring through mysterious lands, fighting dragons and other magical beasties all while playing a game where the world and the deep, complex story is constantly changing and progressing, then GuildWars 2 is your game.

Just like that you already know half of what you need to know, you rockstar!

Now if you aren’t already an avid Guild Wars 2 player (which is pretty much the audience I’m going for here) then you also need to know what is Wintersday? And why did I wait for it to arrive before writing this piece?

Well, Wintersday is the Guild Wars 2 annual festive season, it celebrates the end of one year and the beginning of the next in a fantastically merry six-week long event. The world gets completely overhauled, filled with snow, laughter, magic, presents, building snowmen, throwing snowballs in the faces of your friends and everything else you could possibly wish for. Wintersday arrives in December each year and runs until the middle of January, which generally gives me just enough time to slowly wean myself from all these amazing holiday vibes, both in game and in real life, bid another year goodbye and come back to reality again.

For me, Wintersday is like having an extra holiday each year. 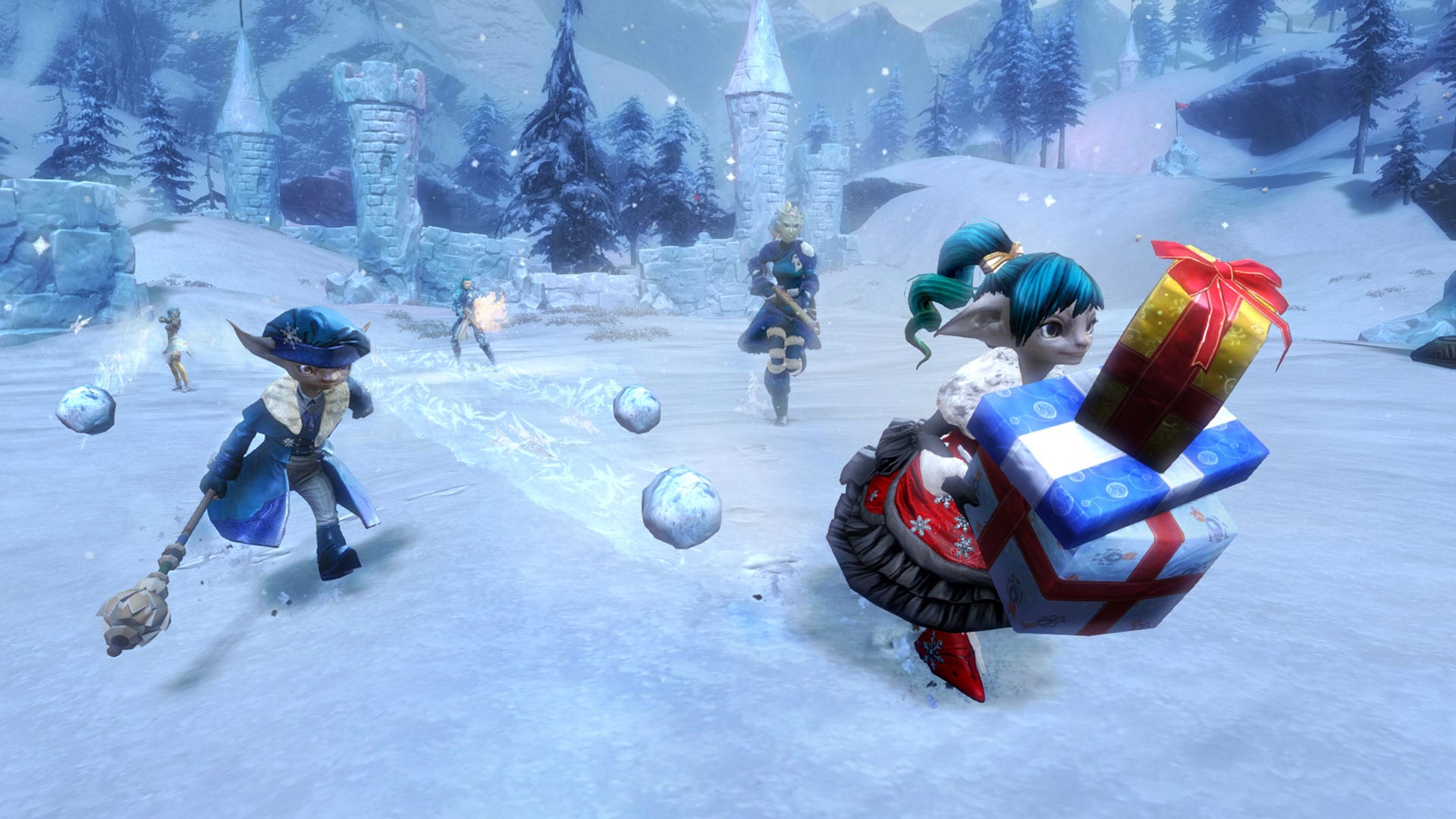 This is the part of the post where I would usually start explaining to you how to play Guild Wars 2, but here’s the thing, Guild (which is what all the cool kids call it) already comes with a pretty bomb tutorial and most of the game is picked up through actually playing and experiencing it for yourself rather than just reading a guide. That means there really isn’t much for me to teach you other than the differences in the different characters you can create for yourself when you start playing.

When you first start up Guild Wars 2 you will need to create a character for yourself, you can choose between a whole bunch of Professions (this changes the weapons you use and the spells) and Races (this changes where you start in the world and how you look) that you will then put together to make the perfect character that suits you. To help you not feel like you are drowning in choice or just having to pick blindly, I’ll run through the options for you:

The Races of GuildWars 2

They are recognizable for their short, alien-like look, but these magical inventors are intellectual giants. The Asura use their knowledge and skill with magic and crafting to assert their natural dominance. In the world of the asura, it is not the strong who survive, but the clever. 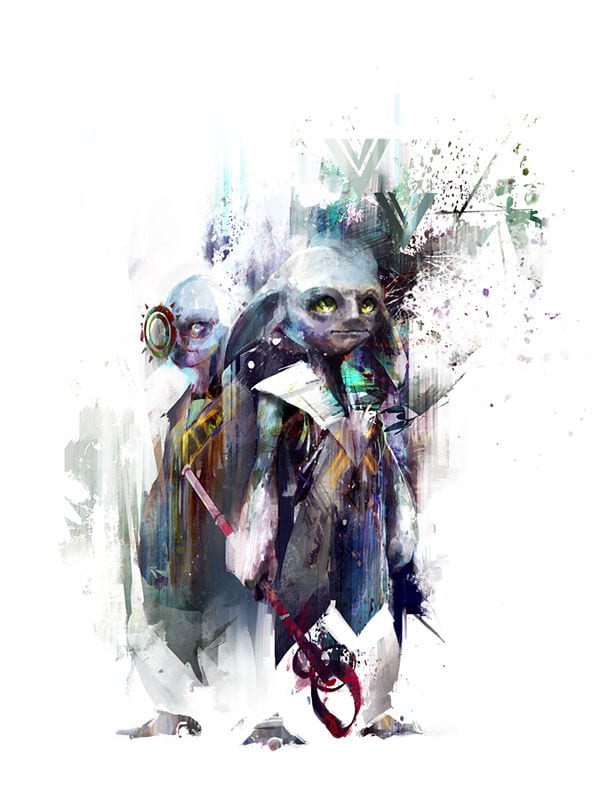 Elegant beings created by the Pale Tree and forged from plants

The Sylavri awaken seeking adventure. They are new to this world and magic shapes them into the mysterious and noble beings they are. 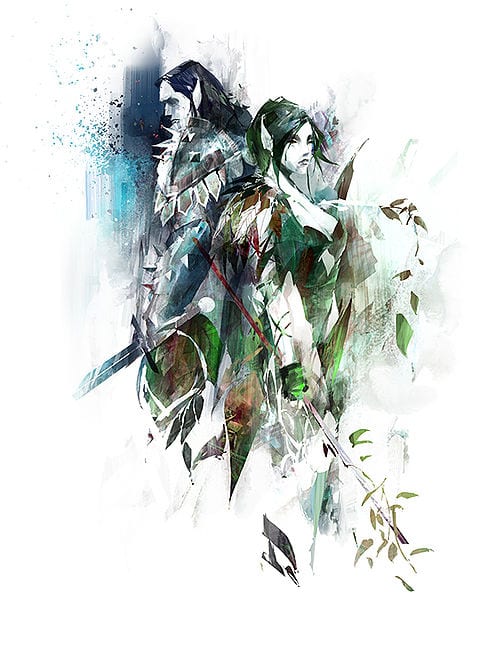 The most resilient of all the races

The human race has lost everything from their former glory to their gods, but yet they still persevere.   Humans are known for their bravery and for being loyal defenders of Kryta. 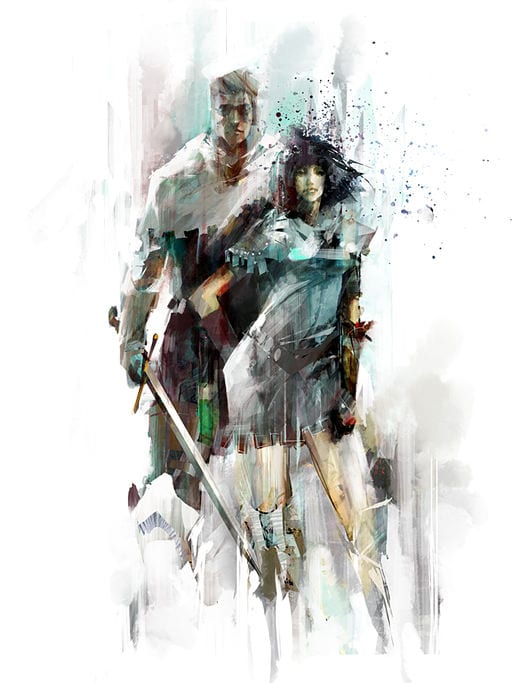 The Heroes of the North

The Norns are discernable from the Humans thanks to their towering stature, they are great hunters who never shy away from a battle. They live for the hunt and for the chance to become a legendary champion. 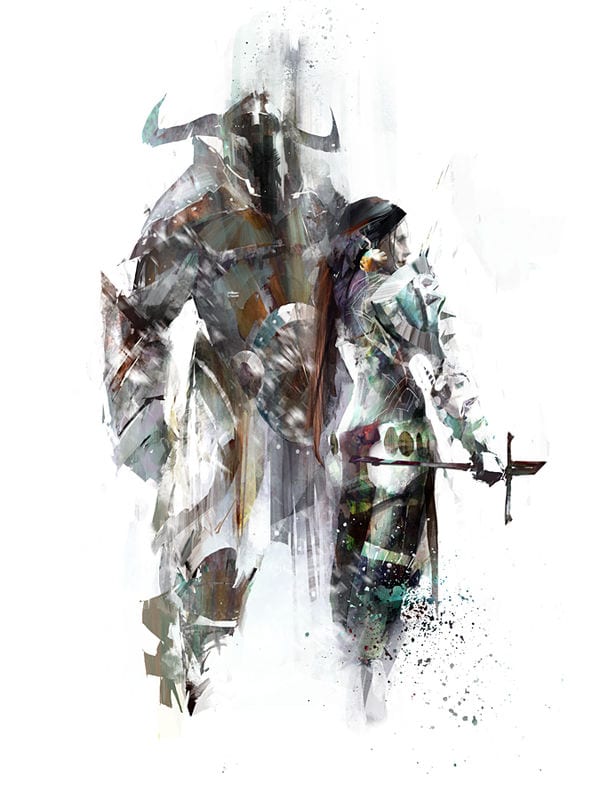 Born from the fire of war

The Charr can’t be mistaken for any other race thanks to their animal-like appearance. Charr are born warriors, war defines them and shapes who they are. Victory means everything to a Charr and they will go to any lengths to achieve it. 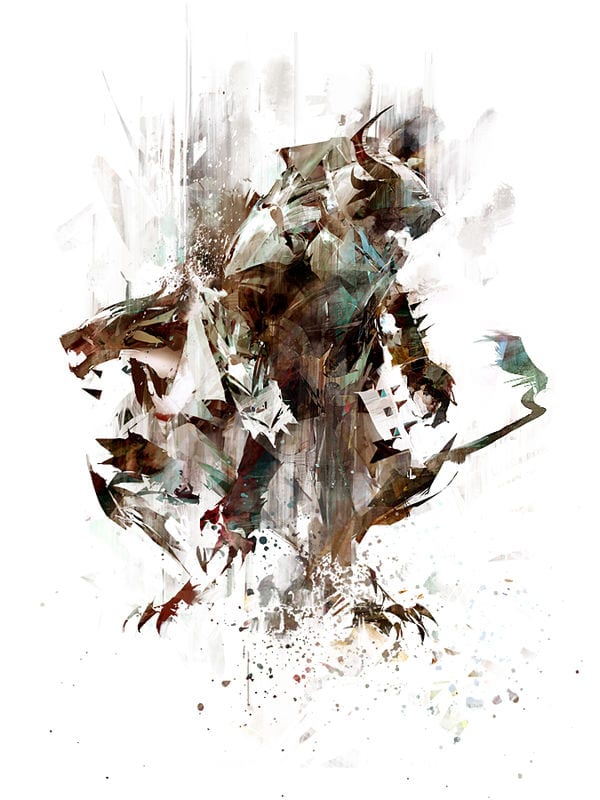 Those are your Races. Once you’ve picked a race you can then choose a profession for your character. A profession is basically like a life path that you choose for them. It decides what they take with them into battle and how they use it.

The professions you can pick from are:

After you’ve managed to pick your Race and Profession you can then still work towards and choose between a bunch of specializations for your character, making Guild Wars 2 one of the most customizable online experiences you can have. 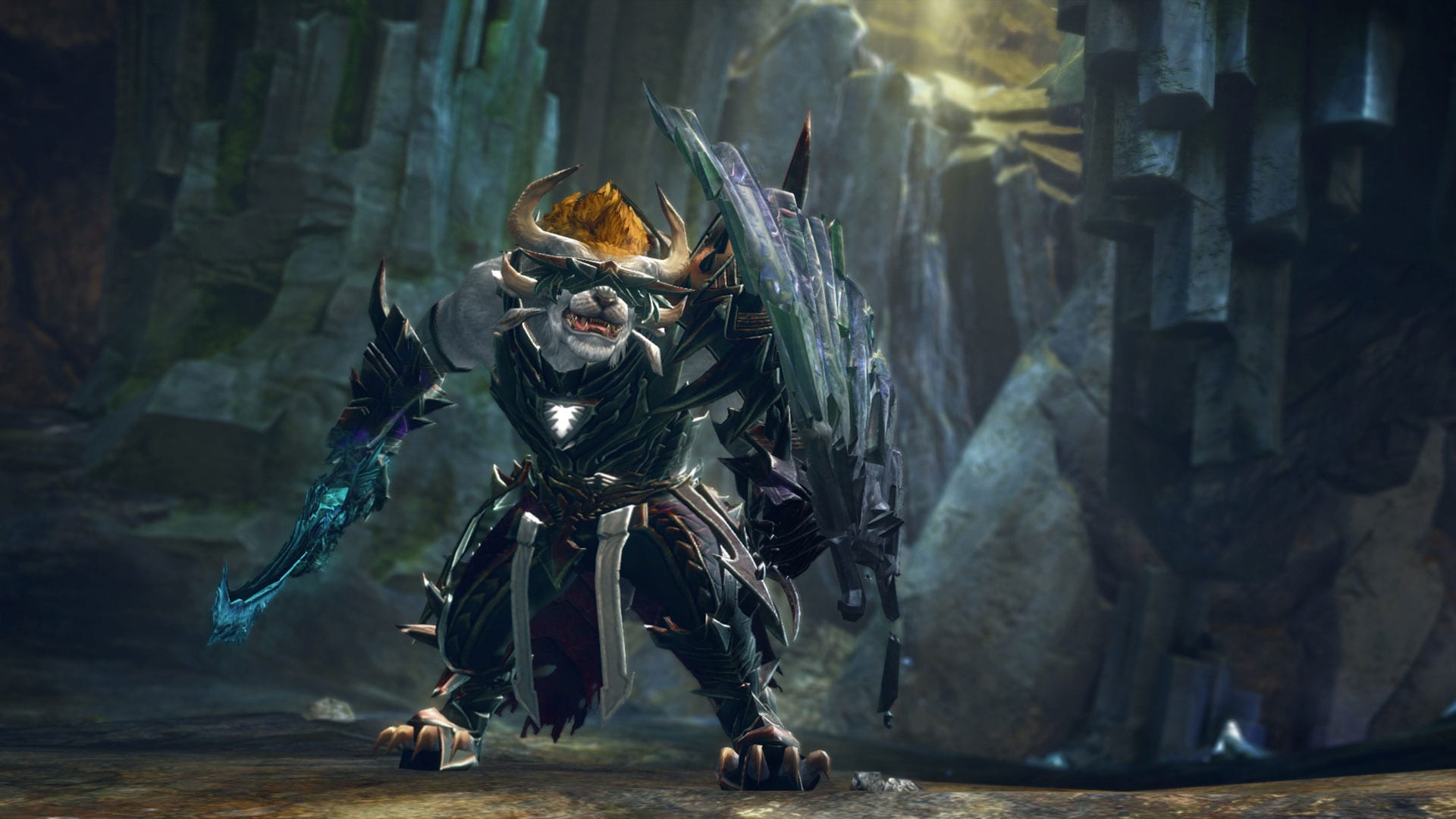 But this piece isn’t just about me selling Guild Wars 2 on you because as far as I’m concerned, it really doesn’t need much selling.  No, this piece was written because Wintersday has arrived, and as I said earlier, this virtual event has become something I look forward to every year. Wintersday is just about logging on and celebrating a holiday with friends. There is an endless amount of fun to be had without any of the stress or drama that real life holidays present.

So let me tell you a little bit about what you can expect when you dive into your first Wintersday festival: 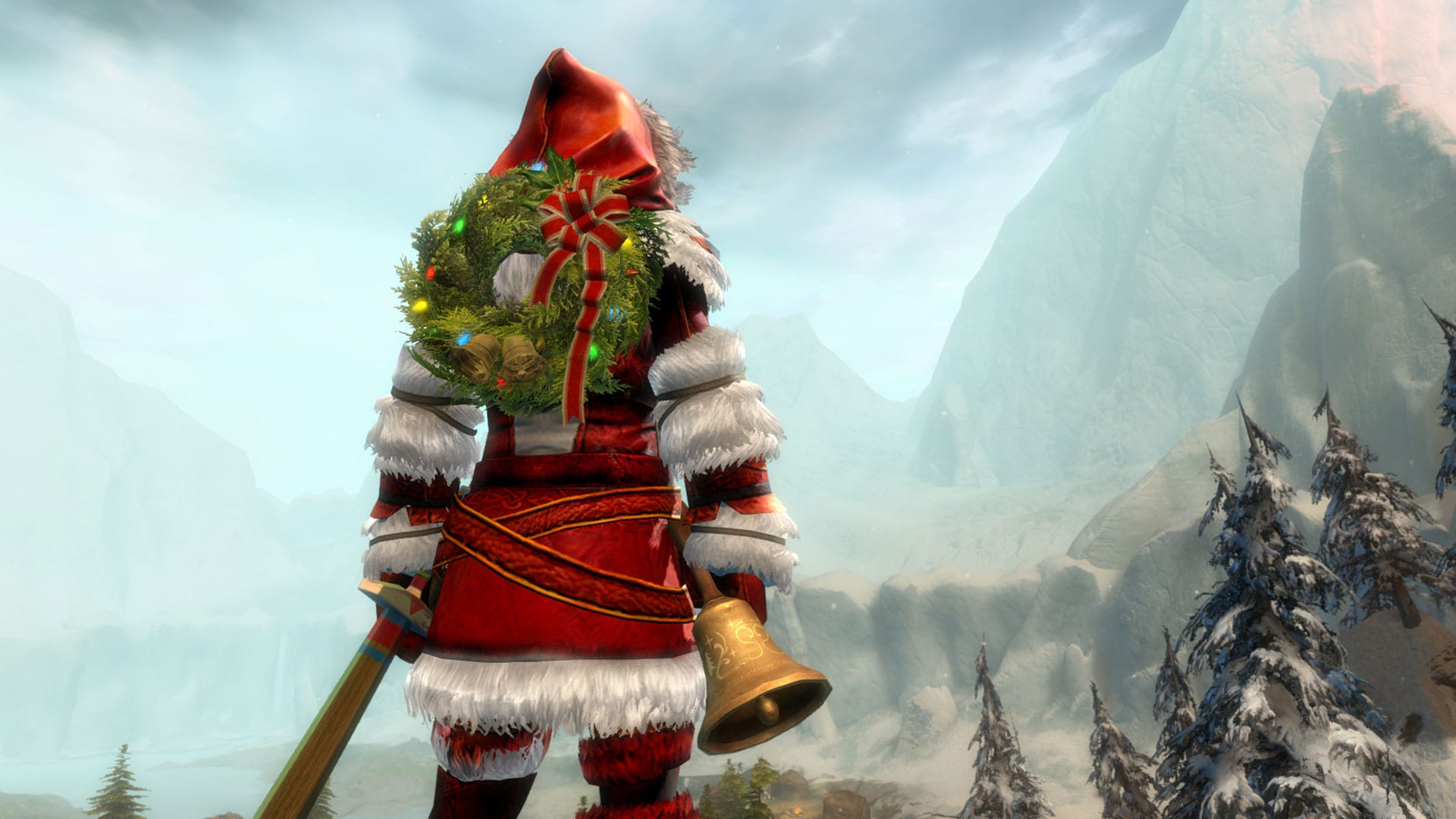 Wintersday comes with a collection of ‘fun in the snow’ things for you to do. You can build a Snowman, hunt for presents, have snowball fights with your friends and just have fun with other people online – but then there is also a collection of official things that take place each year and that you need to know to look out for, they are:

Enter Toymaker Tixx’s workshop inside his Infinirarium, to corral mischievous toys, collect runaway dolls and make sure all the presents are ready to be delivered to the children.

The multi-path jumping puzzle is one of the hardest, yet most satisfying, death-defying jumping puzzles there are. Leap from snowflake to snowflake, jump across a set of disappearing presents, and race against giant snowballs on your path to glory.

Tyria’s favorite musical challenge, the Bell Choir. Group up with other players to see who can make the most beautiful melodies in all of Tyria with this fun, musical game.

The toys are running amok and threatening everyone’s Wintersday! It is up to you, and a team of 4 others to defend the noble, gift-bearing dolyaks from the malfunctioning toys.

What good is having snow all around if you can’t pelt friends, foes, and total strangers in the face with snowballs? The Snowball Mayhem fight will pitch you against other players in a mission to store up as many presents as possible while laying waste to the opposing team. 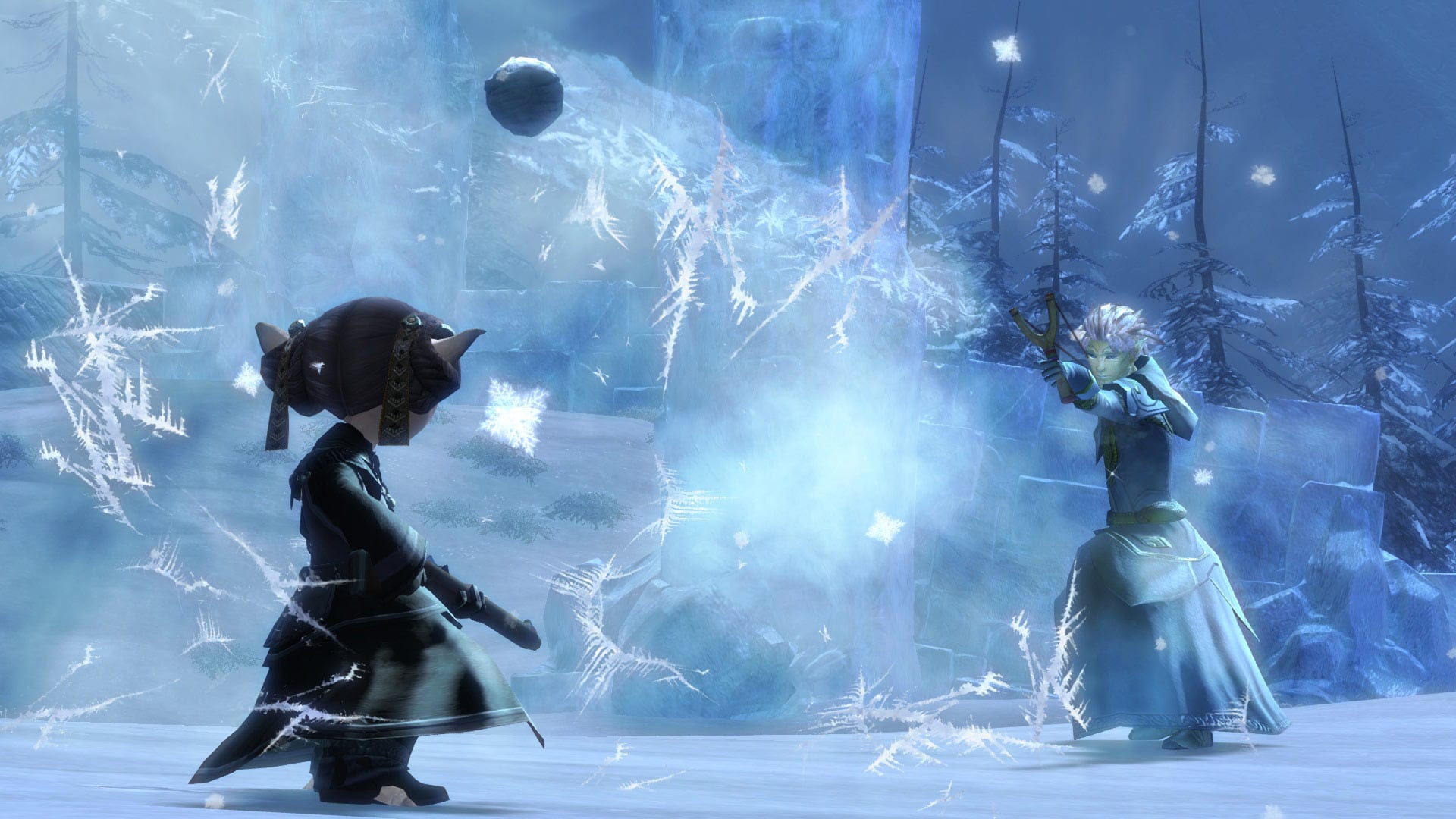 There is one part of Wintersday festival that I’ve never enjoyed though and that is the jumping puzzle.  Remember how I said Wintersday was like a real-life holiday but without the stress? Well, the Wintersday jumping puzzle is like taking all the stress from every real-life event ever and condensing it into one. It is literally, the. worst. UNTIL I got it right, and now it’s the thing I’m most looking forward to.  I’ve been trying relentlessly for the last three Wintersdays past to complete it and it’s just been this impossible hurdle. Last year something just clicked and not only did I manage to finish it at last, but I managed to record this moment of insane personal achievement as well.

Watch me be a complete Wintersday rockstar here 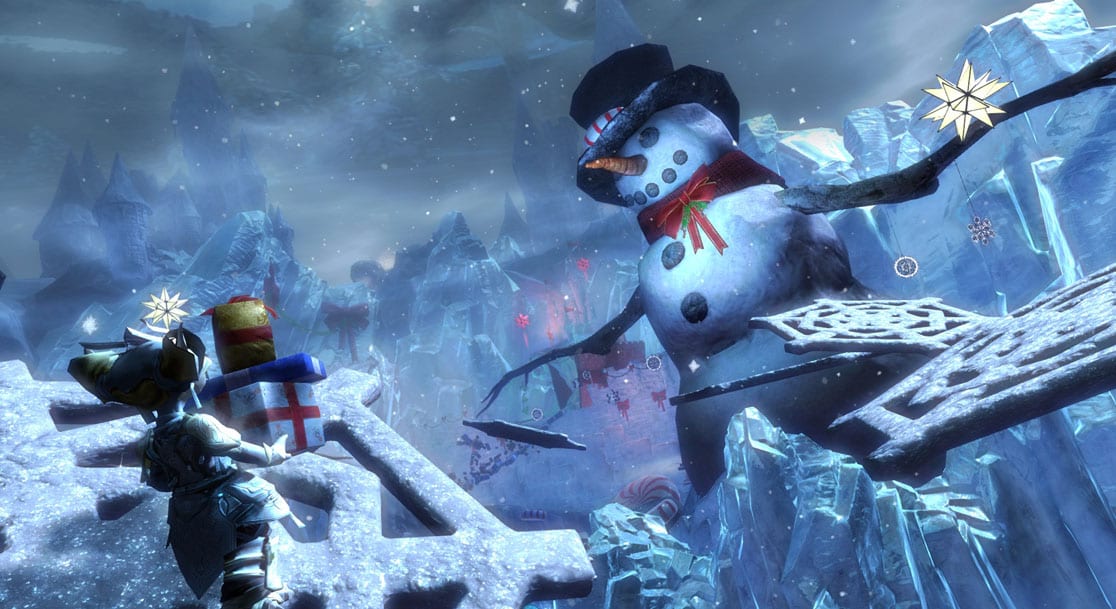 If you do start playing and see a Human Necromancer running the jumping puzzle, again and again, and again while laughing maniacally? Yup, that’s probably me.

If I haven’t managed to convince you of it yet, Wintersday is a really wonderful festival, and most of the joy lies in the amazing community and the playful banter among everyone while playing. If you haven’t yet wandered into the world of Guild Wars 2, this Wintersday event might just be the perfect time to start.

Will you be trying out Guild Wars and Wintersday for the first time this year? And if you already play, which festival in game is your favorite one? Let me know in the comments!