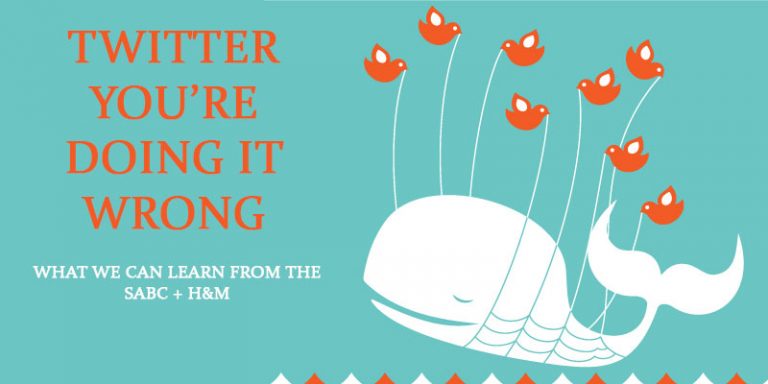 Social media is awesome and you have a lot of power, especially if you manage big brands. But with great power comes great responsibility. And some people can’t handle that. Let’s take a look at the twittersphere last week as we thank the SABC and H&M for showing us what NOT to do.

Someone at the SABC sent out a little tweet. And South Africans, being as awesome as we are, weren’t even offended by the profanity. Instead we thanked that person for saying what we are all thinking.

A very honest SABC employee is about to be fired. That’s good for their CV though! ? pic.twitter.com/pTMRBuISqx

@NattyGov as for the grammar fails in the apology. ?? pic.twitter.com/cNnzxIE47a

A yellow shirt with Zuma’s face on it is the new crocs. — Bevan Cullinan (@BevanCullinan) November 8, 2015

Lessons: if you stick it to the man, then you will be a hero. Typos are never cool. Also keep an eye on who has access to your Twitter profile and change the password whenever someone leaves.

The fashion brand had their launch party in Cape Town and Joburg and someone pointed out that their models were mainly white. Instead of making changes, they tweeted this.

@Tlaly_Branch H&M’s marketing has a major impact and it is essential for us to convey a positive image. 1/4

H&M regrets the response to a social media message that was recently aired and wishes to clarify the intention. pic.twitter.com/IybEBotudU — hmsouthafrica (@hmsouthafrica) November 5, 2015

1. SA fashion blogger points out that H&M only have white models.

2. H&M opt to reply with a number of tweets and in tweet 1 of 4 express their desire to convey a “positive image”.

Lessons: always address issues head on and don’t make excuses. Never send a tweets out in parts. Twitter has a 140 character limit for a reason.

Fail Whale: don’t ever list how many black models you have worked with after only using white models for a campaign in South Africa. This is the equavalent of a white person saying that they are not racist because they have that one black friend.

And to top it off, my favourite trolling account tweeted this:

We’ve been using only white models for years. H&M does it once and they get nailed. Amateurs.