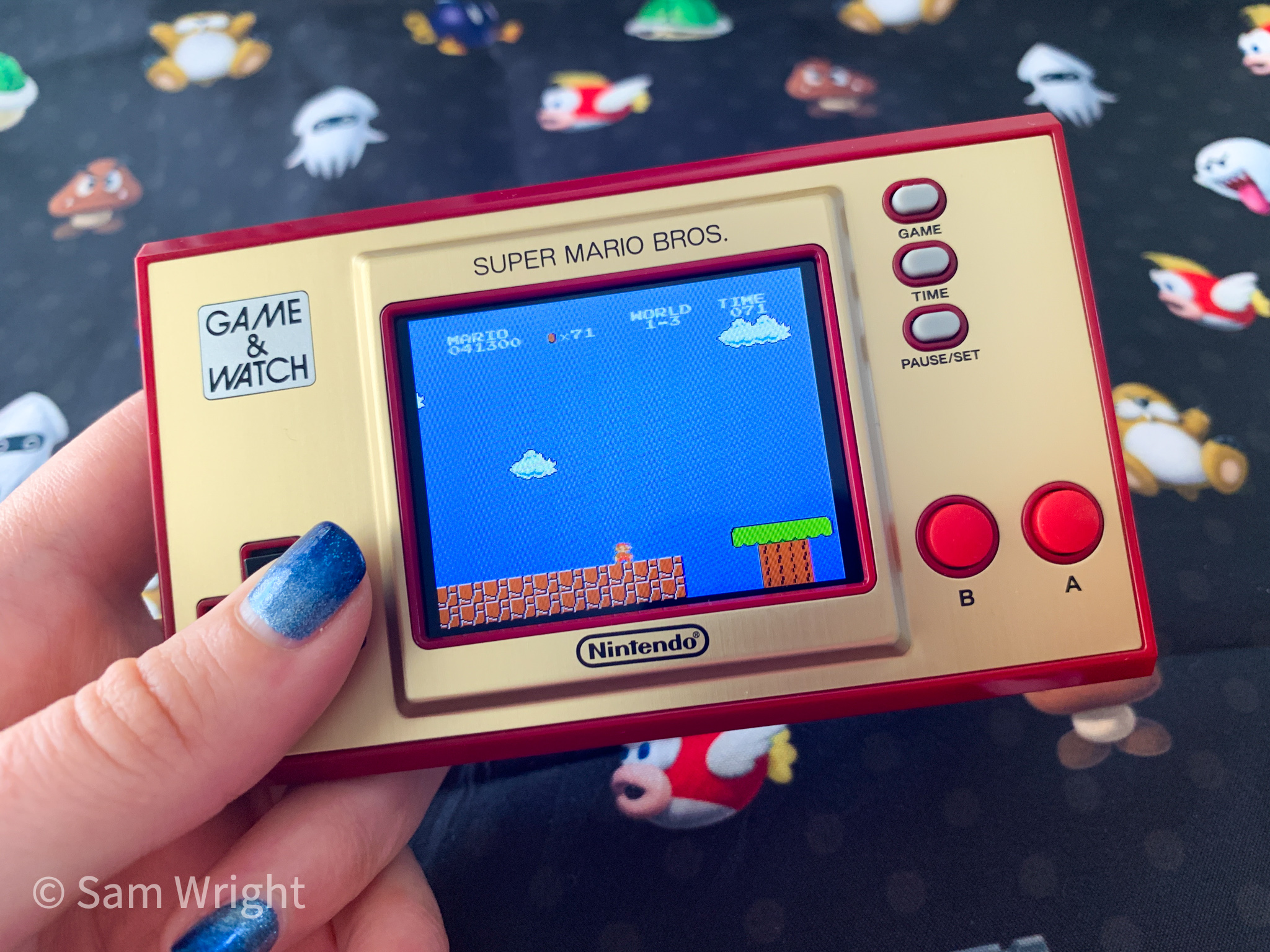 Growing up my parents had this really old gaming console in their bedroom hooked up to an old tiny box of a television. It was one of those old school consoles that ran things like Circus Charlie and a host of Mario games. We were only allowed to play during the day in the holidays when my dad had claimed the computer and my mom wanted us out of the lounge. We’d sit in their bedroom and play for hours till we got told to stop or the console would overheat. This was easily one of my earliest gaming memories. I was absolutely horrific at Super Mario Bros and never saved Princess Peach. Though my dad did a few times, for our entertainment and it was thrilling.

There are stacks of ways to find and play these old games, but Nintendo has gone and done something magical – they’ve released a brand new Nintendo Game & Watch. The Game & Watch isn’t something new. It was one of the first handheld consoles that dropped in 1980 and ran till about 1991. Copying the old school controller vibe, you could play some 8 bit games on the LCD screen and it had a little clock face. 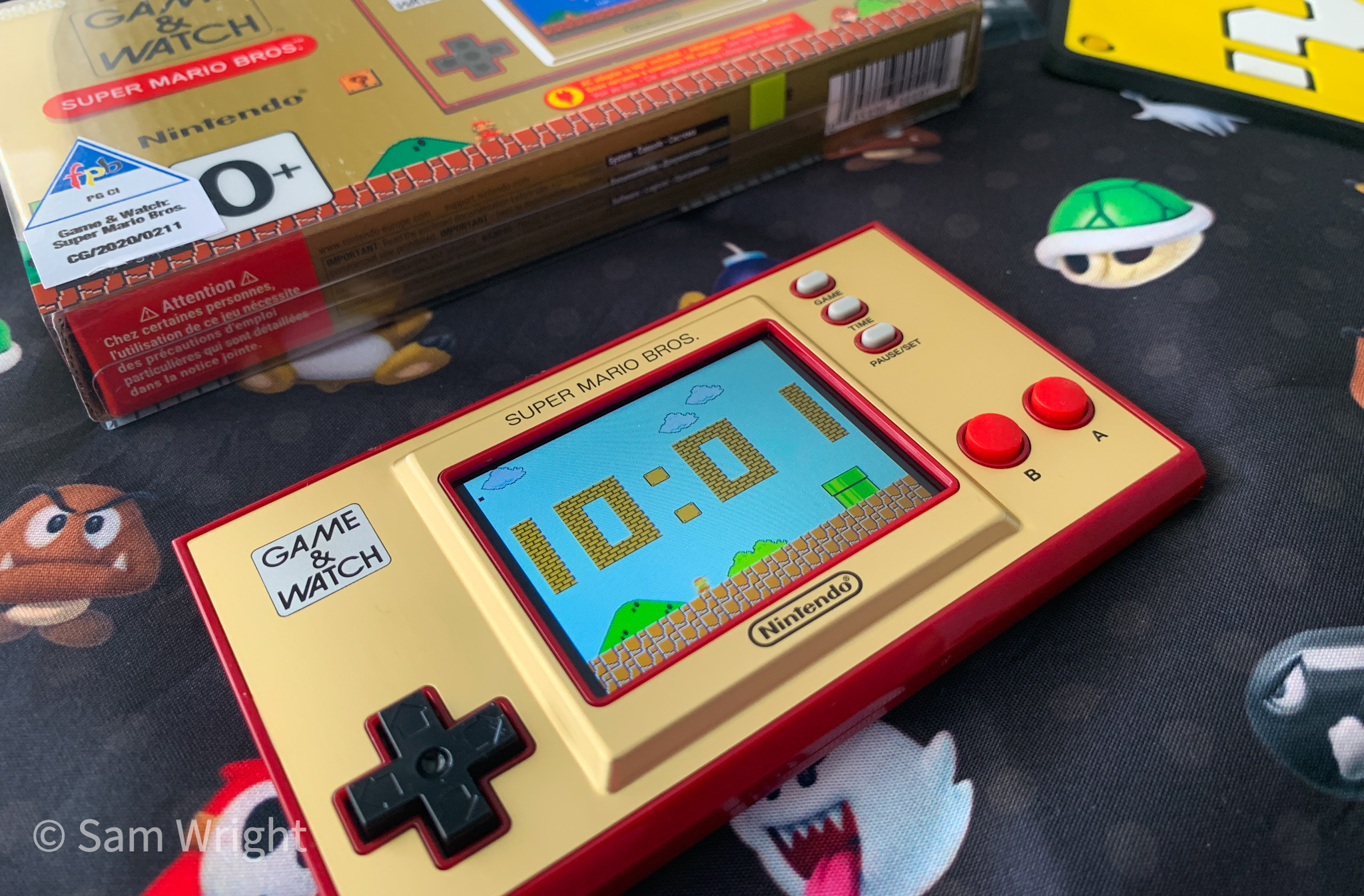 I never had one of these hand held consoles growing up and, if I’m honest, didn’t actually know they existed. But I know now. Nintendo released a 2020 Game & Watch which brings back all the old school beauty of my childhood in the tiniest little package. Game and Watch Super Mario Bros is exactly as the name suggests. A small handheld console with an old school feel that plays two games and offers up the adorable clock face. 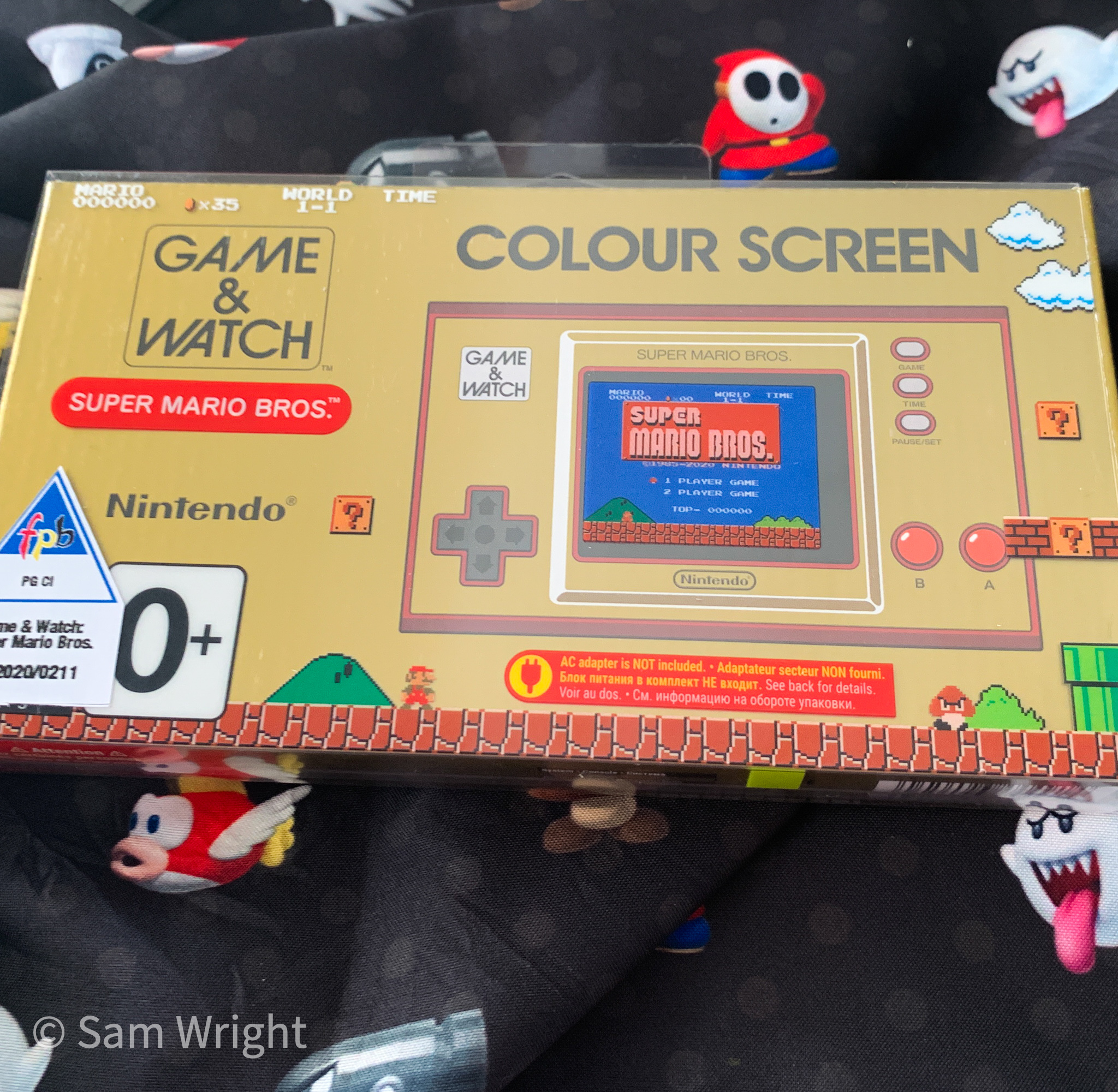 The packaging is low key but still divine. A small gold covered cardboard box has a plastic covering with iconic Mario artwork. The box itself shows you exactly what is included and how to set up. The box itself is about the size of one of the premium smartphone/phablets currently on the market and a bit thicker. In the box you get an instruction manual you don’t need, the tiny console and a USB C charging cable – no surprises there, the Game & Watch charges via USB C. I’ve since found out that the packaging is a nod to the original boxing for the first Game & Watch, which is really special.

What you can play 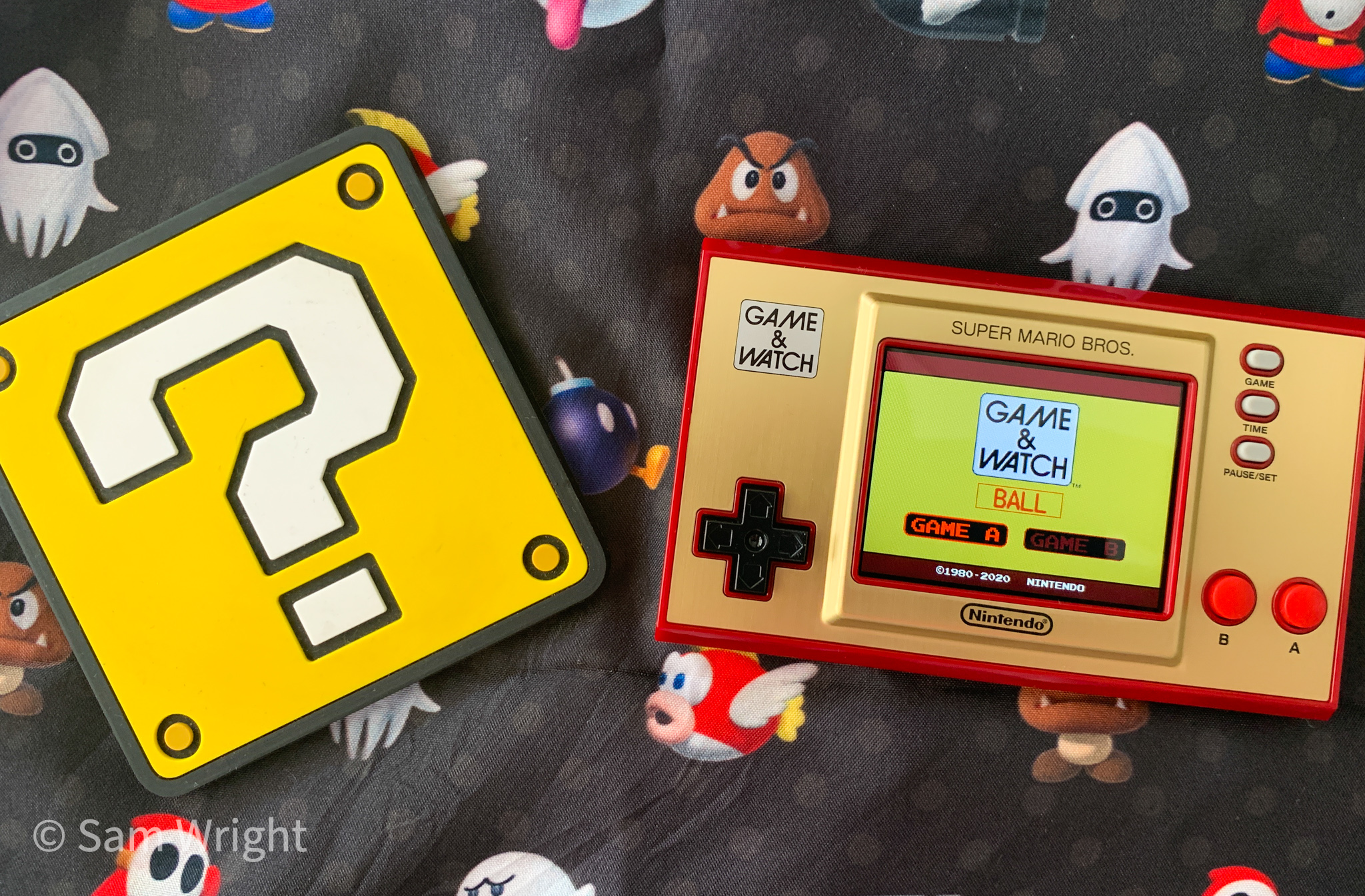 The Game & Watch includes 3 games that you can play:

There is also an application to simply show the time, turning it into a small desk clock. Because it is so small you could easily make a little stand for it and use it as a desk clock (though you’d need to charge it regularly. The battery lasted about 6 hours for me on maximum screen settings and brightness). The games are exactly as I remember them, with the little handheld console playing the iconic music as well. I’ve read a host of reviews about the ability to “hack” the little console to get it to run old school DOOM and Pokemon. However, at the time of review I was not aware if I was able to keep this console or if I needed to return it, so I chose not to try hack it. If I get word that I’m able to keep it though then I am 100% trying to get DOOM to run on it.

A few things to note 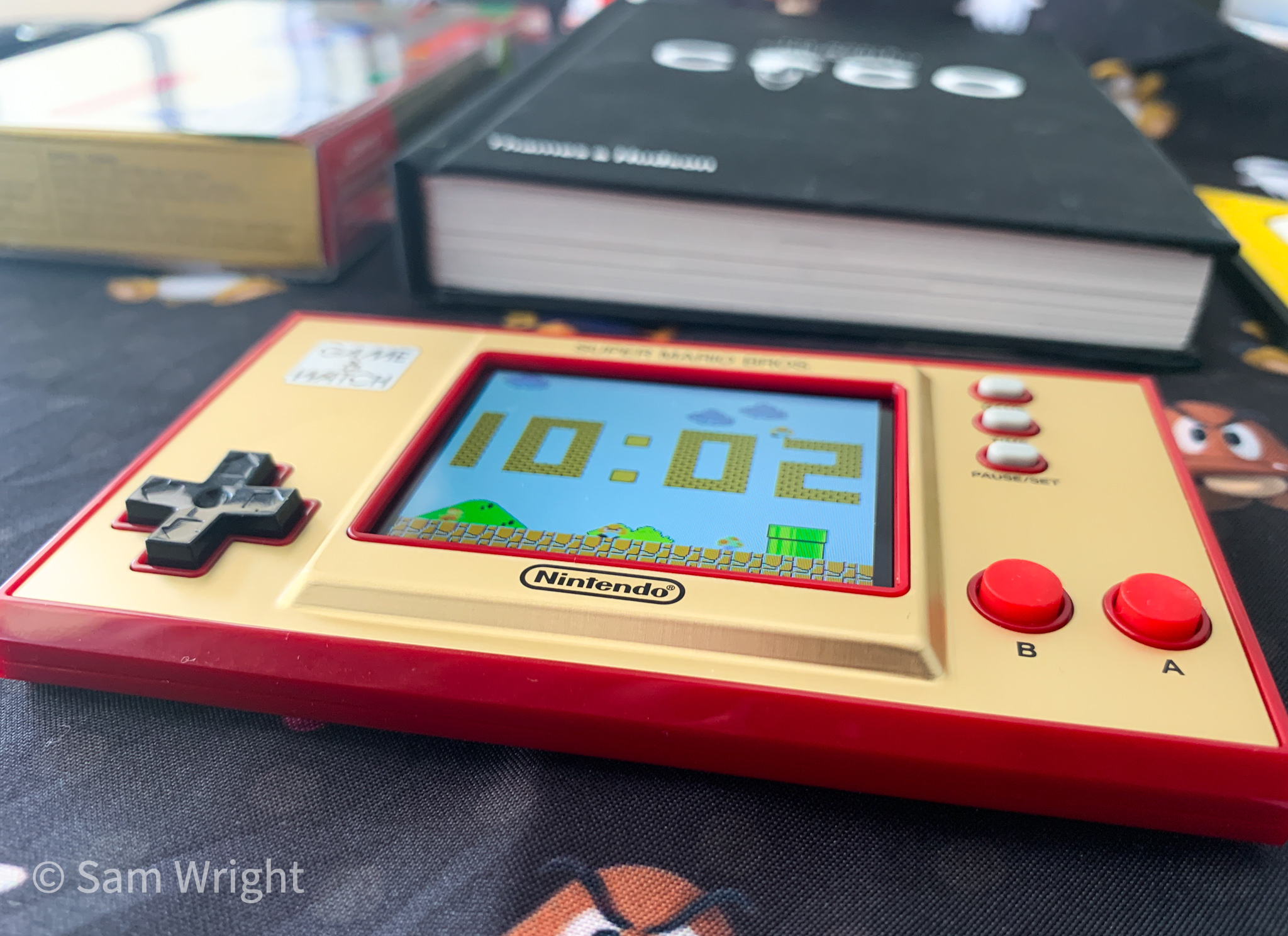 The games on the Game & Watch are timeless. Whether you’re 35 or 5 you’ll love them. The tiny screen has a bit of an upgrade. It is full colour. I was worried about the size but had no problem at all. It measures at 2.36″. The console itself is TINY and weighs around 68 grams. It seems slightly wider than the controllers I remember on my old console, but for the most part, it really is a little thing. I’d have loved a little stand to go with it, but there isn’t one included so you’d likely need to get one made. A friend of mine suggested 3D printing something which is a great idea. The clock isn’t just a clock, with lots of different secrets to unravel there. 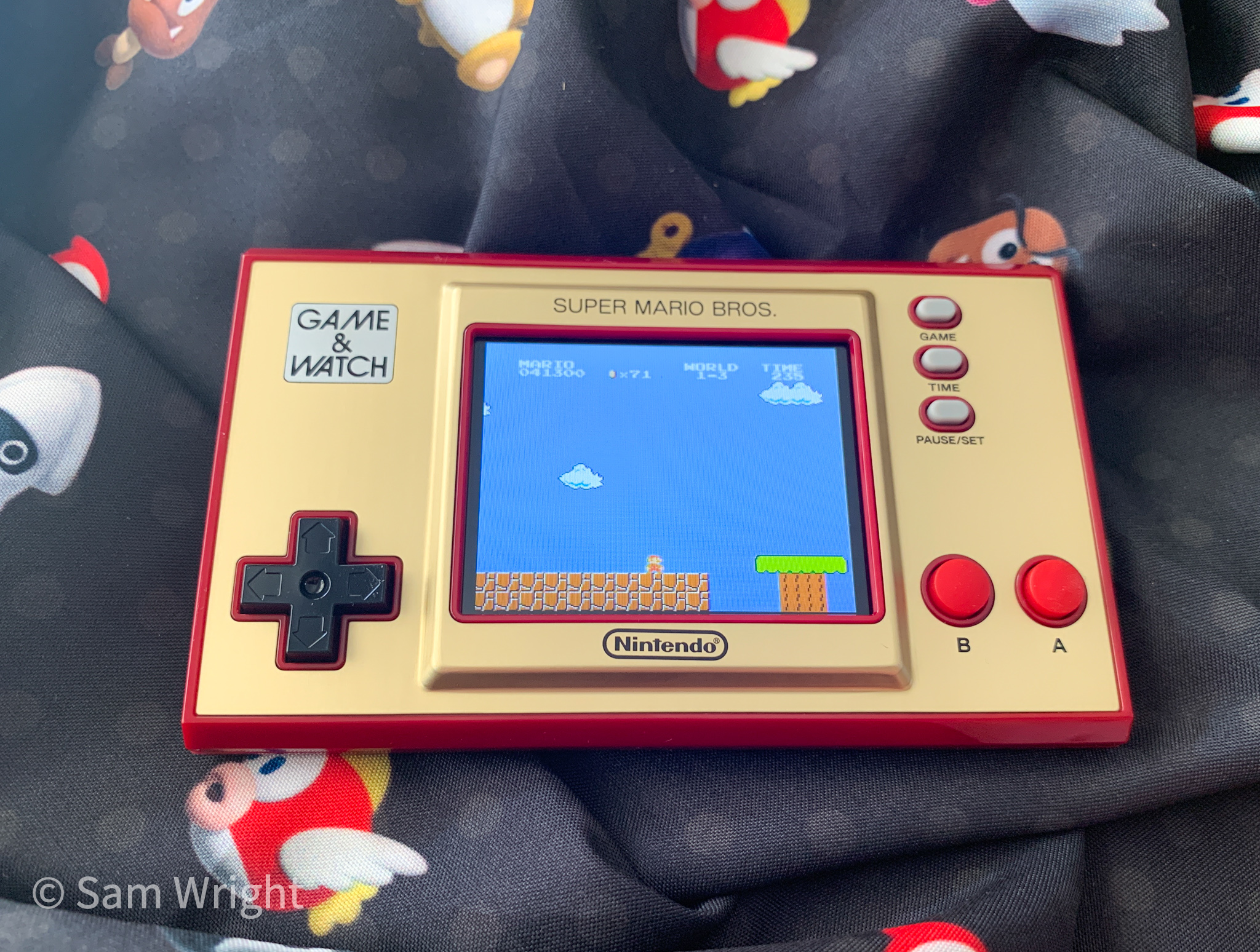 The Nintendo Game & Watch release was a commemorative release and was launched to celebrate Mario’s 35th Anniversary. It will have a limited release, meaning once the units are gone you won’t be able to get your hands on them. The South African Nintendo Store has units selling currently for R1299, which you can find here.  When I first heard the price I was a bit taken a back, but honestly after a week with this little beauty I’m completely okay with it. It will bring you hours of fun and can easily be slipped into a handbag, to keep you entertained while stuck in queues or bored at family gatherings during the holidays. Most importantly though, it is a magic piece of nostalgia. The moment I started playing I was transported back to a younger me, hell bent on remembering the secrets of the game and the special nuisances that make Mario such an icon character that has touched every gamer’s life. This is a special little gift. You owe it to yourself to grab one.

Disclosure: I was sent a Nintendo Game & Watch to review.