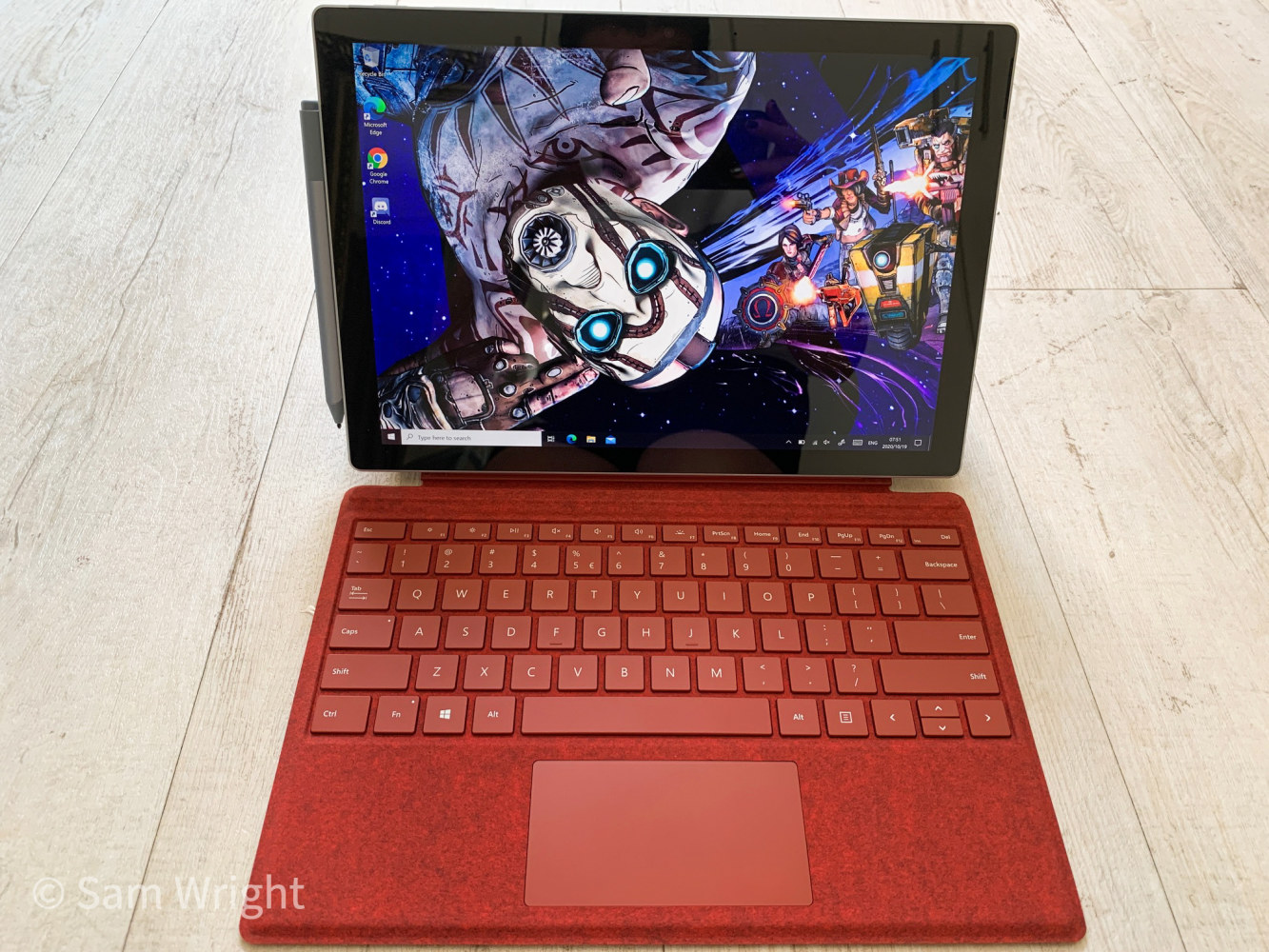 Before I begin this post, I think you need to understand my current set up. I have a gaming rig. A desktop PC with all the bells and whistles, including two monitors. Then I have a MacBook. It’s a throw back to when I had a corporate desk job. I bought it then and I’ve kept using it. Before I justified it because I had an iPhone and also I liked using iMovie to edit. I could also travel with it. I still need a device to travel with because I do move around a lot, but more and more I’m realising my desktop would likely be able to do the work I need. I’ve not yet given up the MacBook and right now it suits my life, but the realisation I had around one day considering a replacement only happened because of my time with the Microsoft Surface Pro.

Not just a tablet 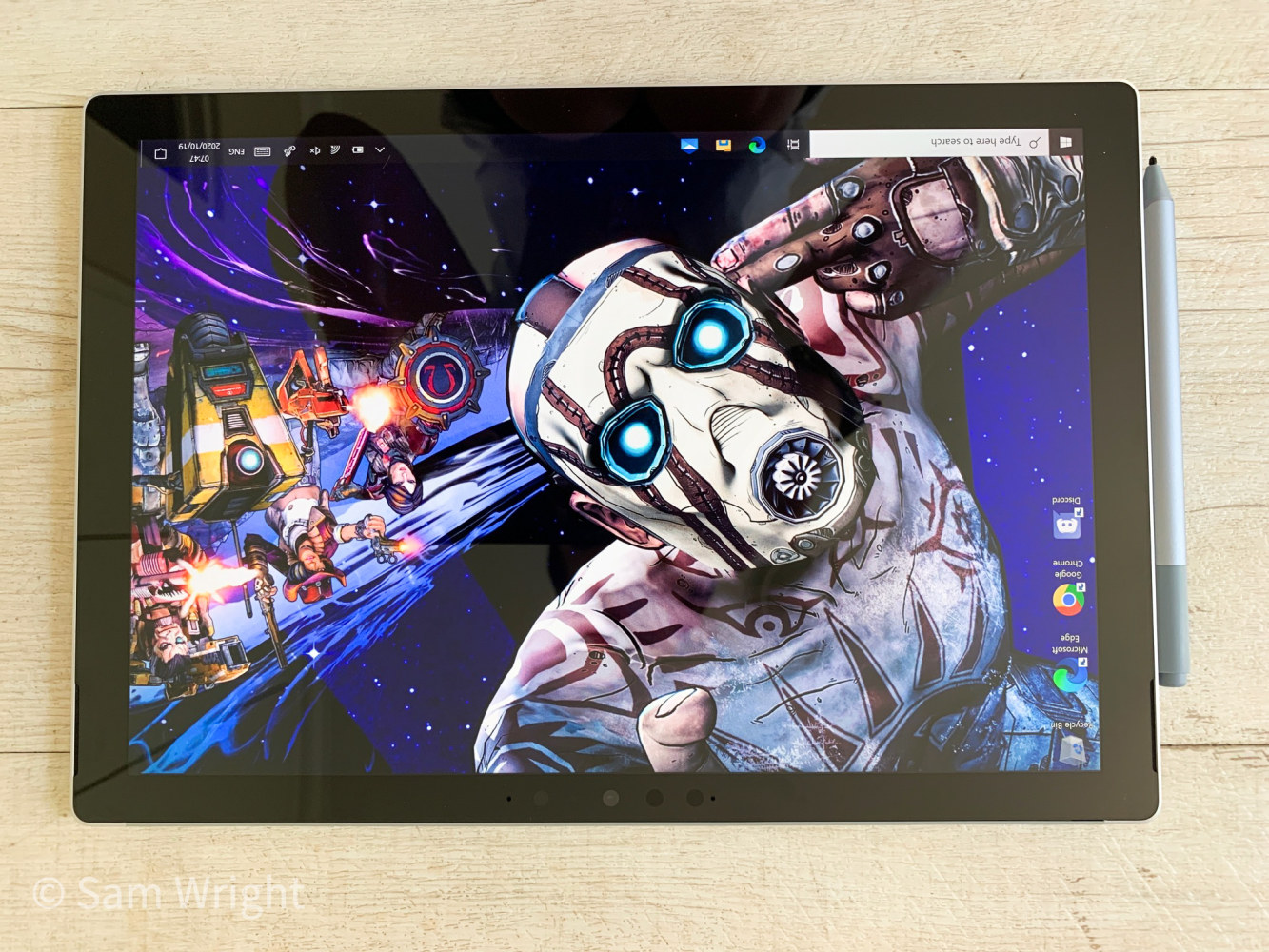 When the Surface Pro arrived I was somewhat unsure. I wasn’t sure I could justify ANOTHER device in my life and especially not a tablet – something I’ve avoided for awhile. There’s an explanation as to why here:

I did desperately want to giving drawing a go though and as the Surface Pro arrived with a Pen Stift Stylet (basically a pen that you can use on the tablet) this seemed as good a time as any to give it a go. The Surface Pro I received to test out also came with another accessory – a signature type cover. The cover not only protects the screen but also attaches a portable keyboard to the device, turning it into a laptop. It’s important to remember that both of these items are additional accessories over and above the cost of the Surface Pro.

Here’s what the Surface Pro can do 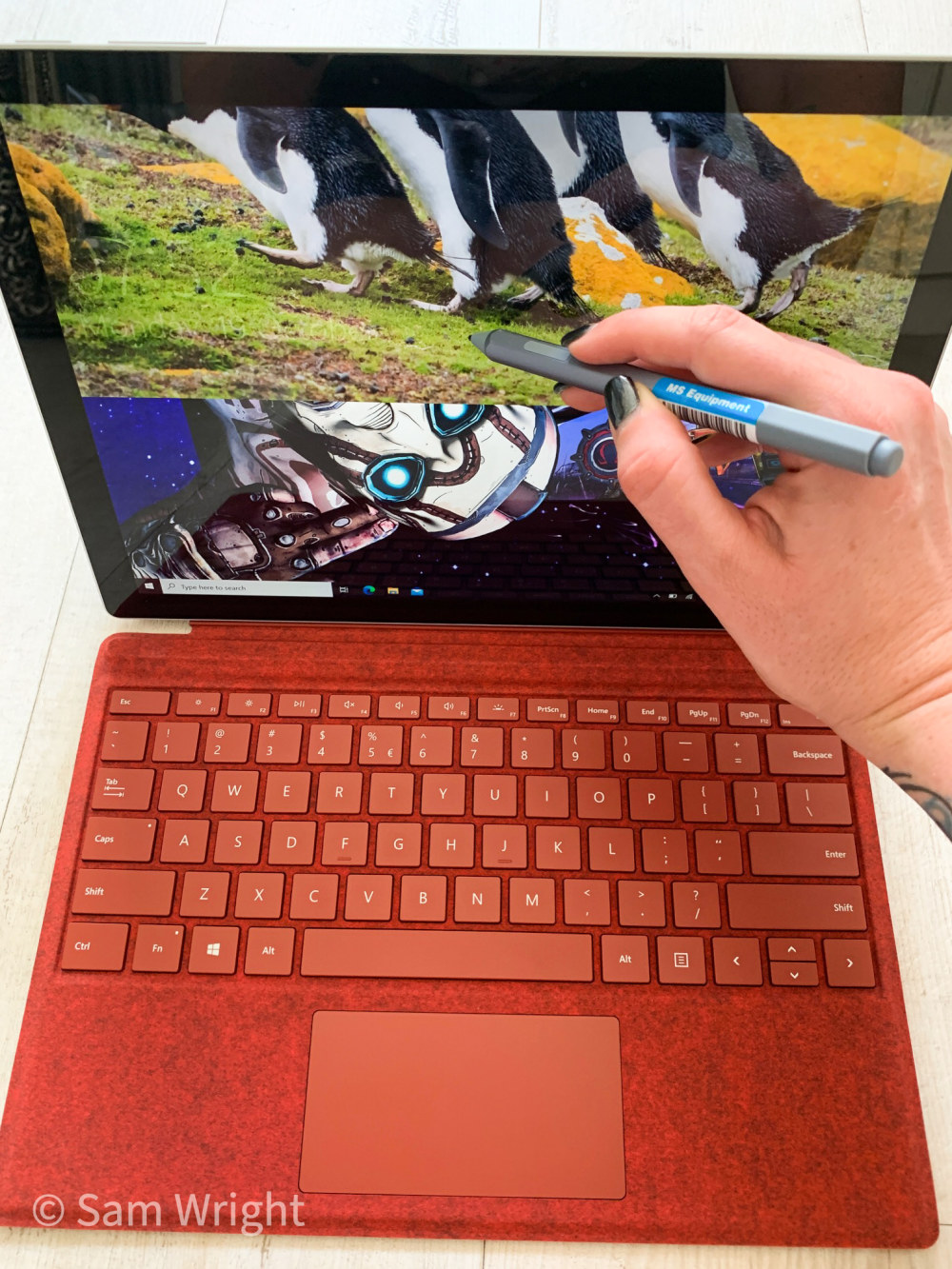 The Surface Pro 7 is a 2 in 1 that swops between tablet and laptop functionality. It has incredible graphics. You’re looking at a high resolution 12.3 PixelSense Display and the colours on screen pop. My stand out feature on the device was the battery life. I used the Surface Pro during a 3 day live esports event to take notes and keep stats recorded. It has an instant on function so you were never having to shut down and restart. It also lasted all 3 days with regular on and off use. I found I’d only need to charge it once a day during a regular work day which was impressive. 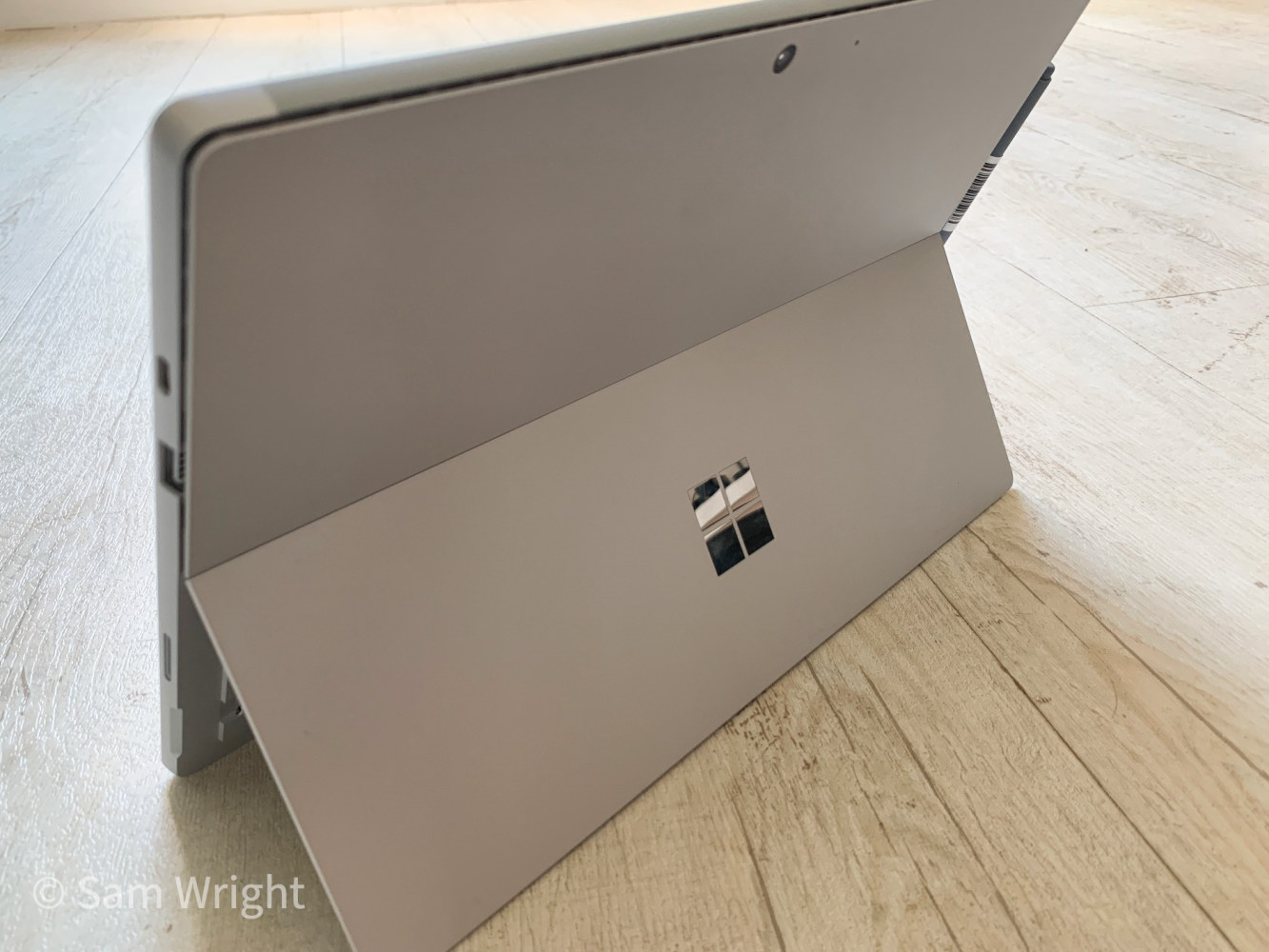 The biggest thing, for me, was that it didn’t feel like a tablet. I had to get used to the smaller portable keyboard and using the pen instead of a mouse (though the keyboard offers a track pad) took a bit of getting used to. Once I had the hang of it though, I found it so easy to navigate and move between what I needed – also being able to scribble down notes as if I was writing in a book was a big change for me and something I LOVED. I had some concerns about losing the Pen, but it neatly attaches to the side of the Surface Pro and doesn’t get in the way at all. The device was super fast (it has a 10th Generation Intel Core processor) and felt like using a laptop even when you were in tablet mode. It’s super slim and light but has a USB A and USB C port so you can still transfer work things (or charge your phone). 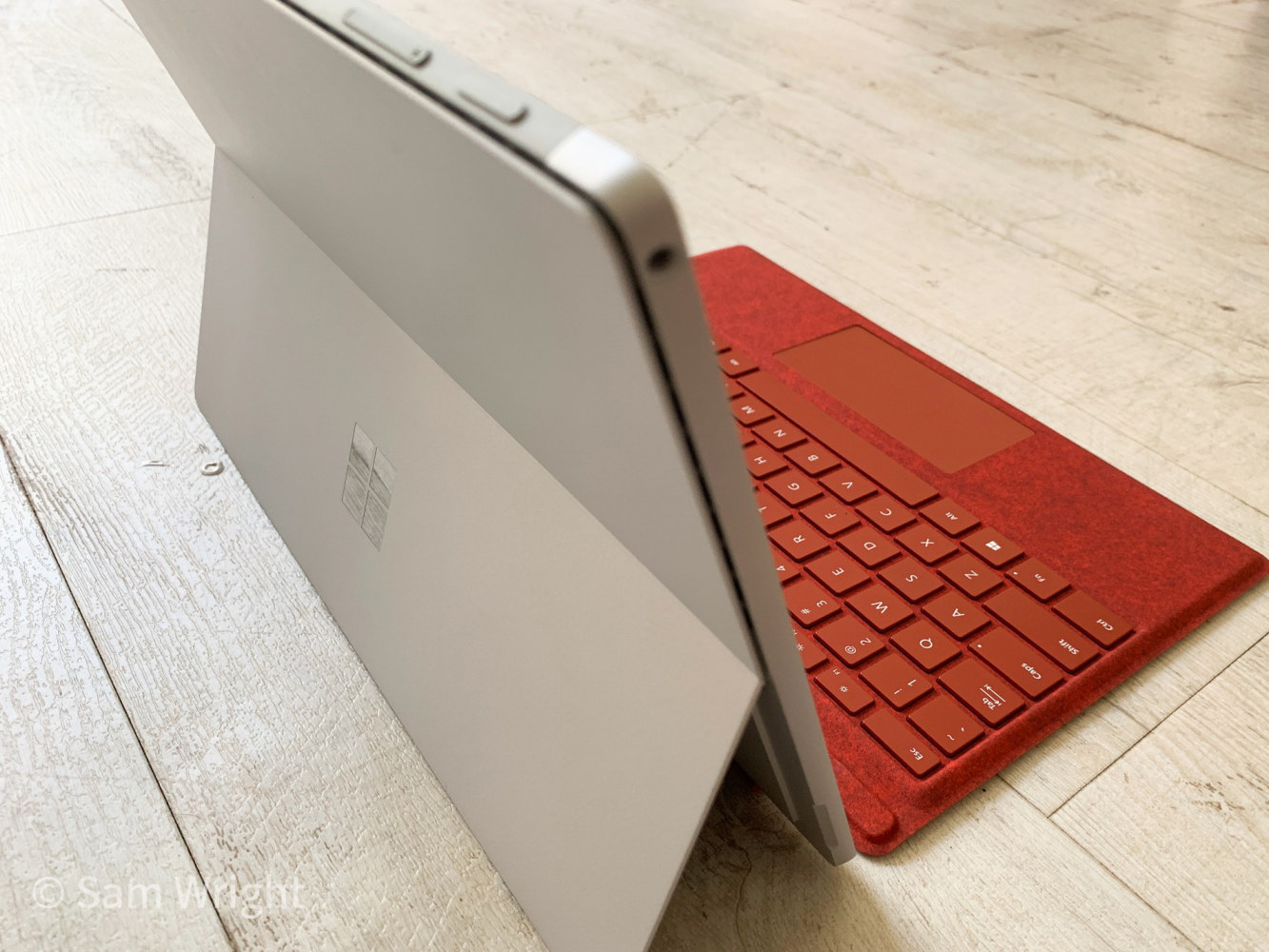 There’s a kick flap at the back of the Pro that gives it a stand to work with. Travelling with it is so easy because it is small and light, but then you can set it up on a table or your lap to watch movies easily too. The screen is the perfect size for work and entertainment. The more I used it the more I loved it. 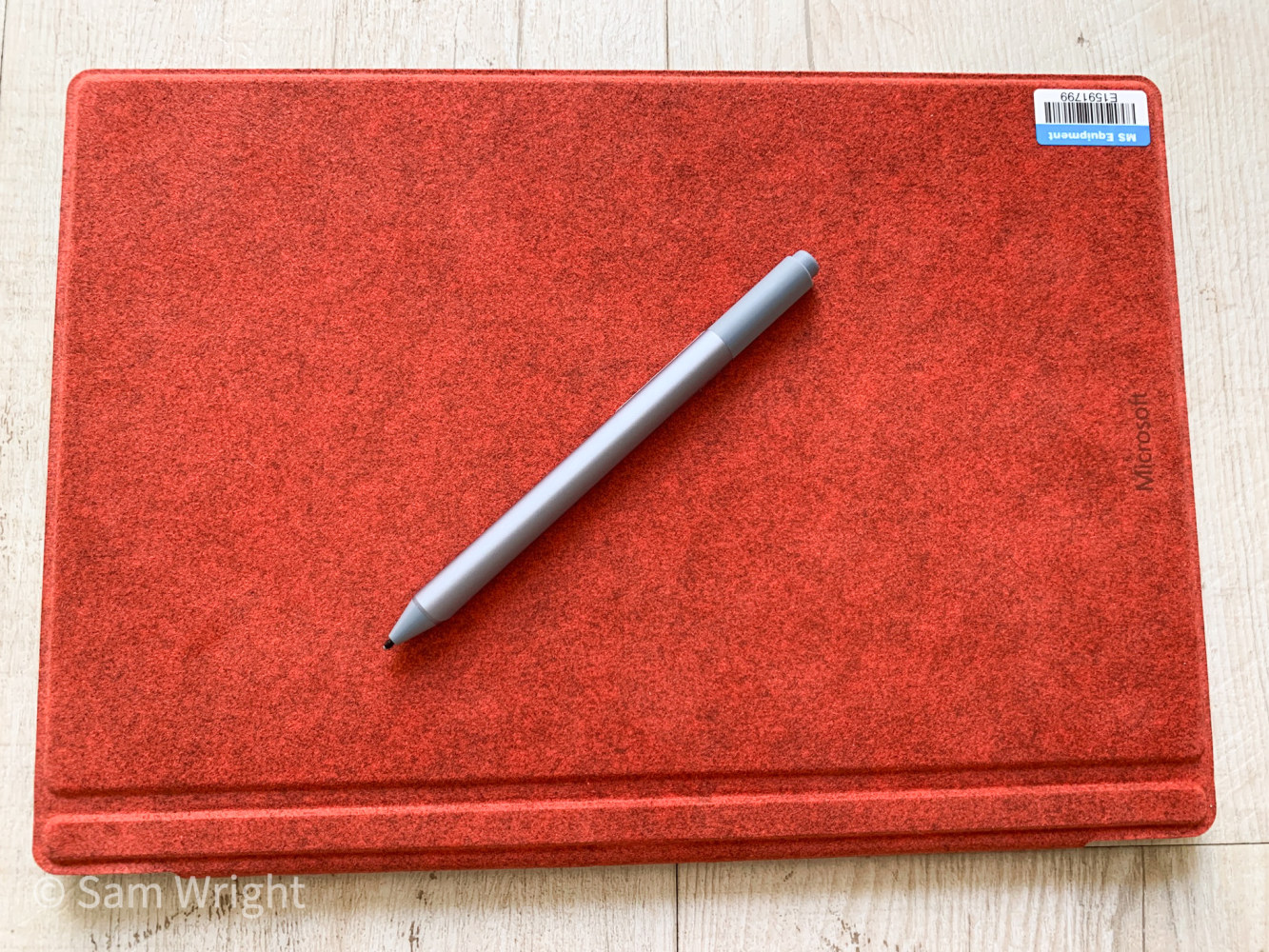 When it was time to pack the Surface Pro up and send it back I felt a twang of sadness. I’m used to using devices for a short while and returning them, but it isn’t often that I get attached. This time I did. I could easily see myself using the Surface Pro as my “work” device. While it is a tablet, it honestly felt just as good as a laptop and offered slightly more with its ability to turn into a notebook when I needed it for meetings or broadcast work. Its versatile and I think could easily look at it as a possible replacement for my MacBook with my desktop being my go to if needed for my heavy video editing. It’s a great machine and one I really enjoyed using. From a costing perspective though, it can’t be a secondary device. This is my main worry – it is pricey. You’re looking at anything between R18 000 and R20 000 for the Surface Pro 7 and then will need to spend additional cash on the keyboard cover (roughly R2700), a mouse (roughly R1500 for the Microsoft Arc) and R1400 for the pen. However, considering the cost of laptops with similar features, it might be worth considering if you’re on the move a lot more than most. I like the Surface Pro, it’s an interesting piece of tech.

Disclosure: I was sent a Microsoft Surface Pro, keyboard and Pen to review for a few weeks. I did not keep any items and they have all been returned.