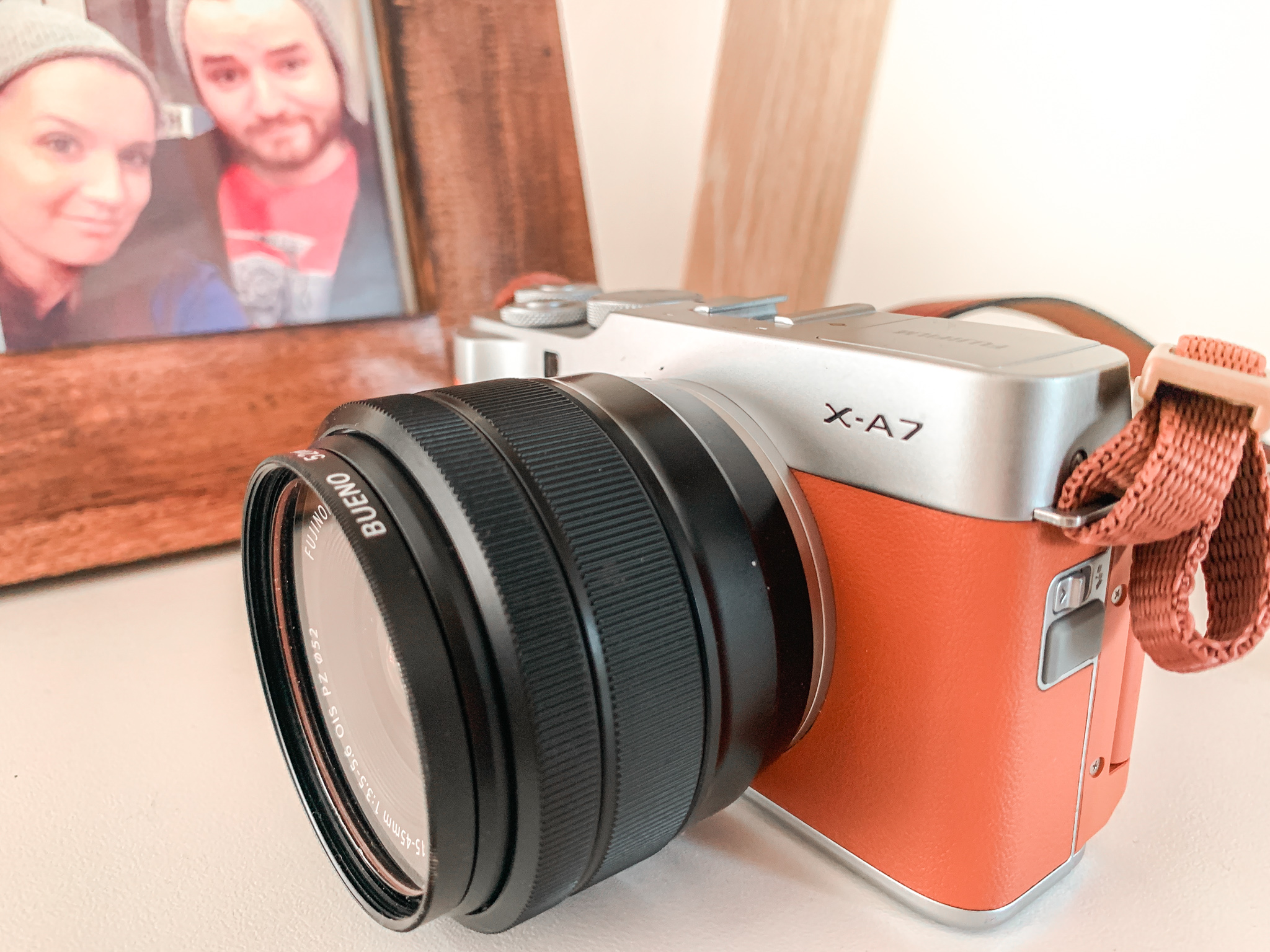 I’m not a photographer. In the last year and a bit I’ve really tried to up my photography game but, for the most part, I’m pretty rubbish at it. My saving grace is Lightroom and a selection of presents to make even my average shots look good. Player 2 is obsessed with photography. He watches tutorials and is constantly playing with his camera. You’ve likely seen his bug pictures that I’ve shared on IG stories a few times. Earlier this year, just before flying to Dubai, he gave me a crash course on how to use my camera. I snapped a bunch of photos and was pretty proud of the job I did… but if I’m honest Lightroom presets were the real saving grace here:

The FIFA diaries – in Dubai with Goliath Gaming

I was recently offered the opportunity to play with the Fujifim X-A7. I ummed and aahed about giving it a go. I know I wouldn’t be able to really put it through its paces as my primary goal with a camera is “does it focus, can it take a nice shot, do I have to do a minimal set up?”. So I decided to see if the X-A7 would be easy enough to jump on and use for someone like me – who is absolutely terrified of fiddling with settings on a camera. 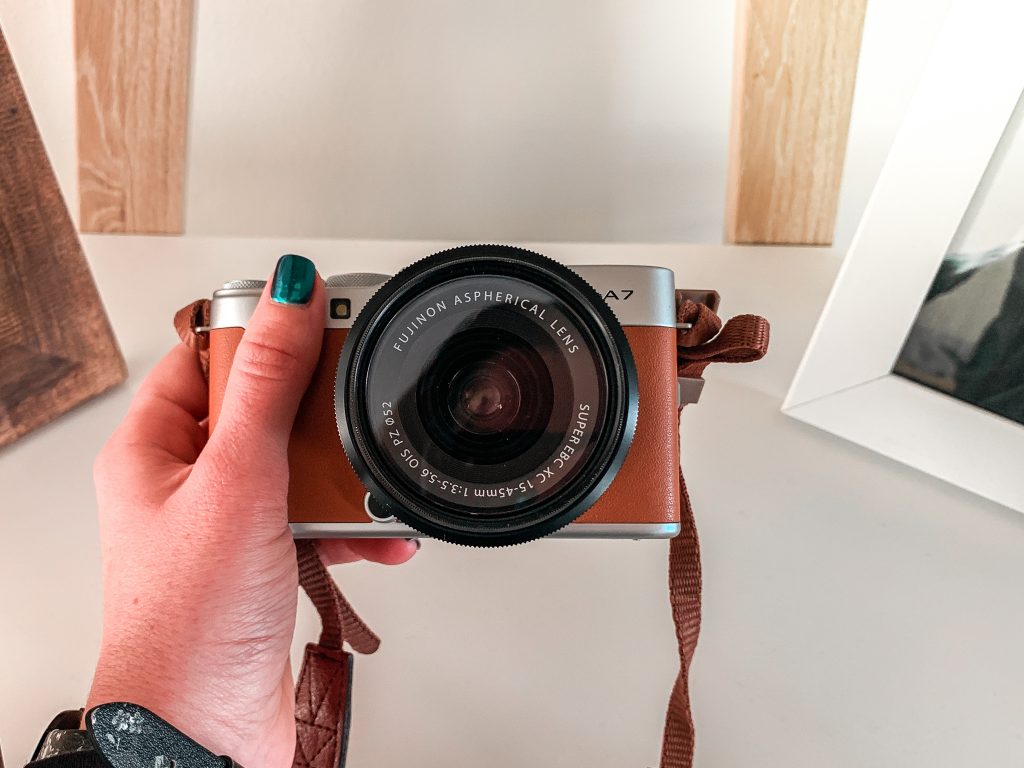 The camera arrived with a lens and on searching through retailer sites this is a standard. The X-A7 is shipped with an XC 15mm-45mm f3.5-f5.6 OIS PZ Lens. I really loved the look of it as well. The review model was silver with a tan finish. You can choose from a variety of colours and I liked the “old school” camera look and feel. The X-A7 feels rugged, which for someone who moves around a lot with a camera – I liked. 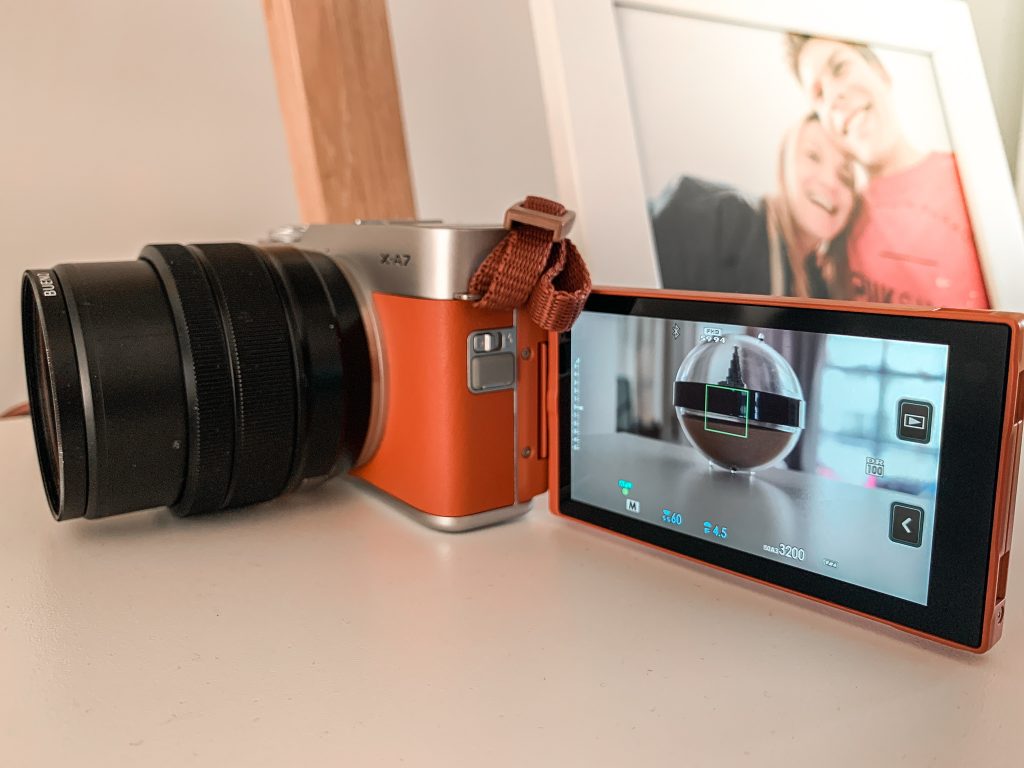 The camera itself is jam packed with features. It has ultrafast autofocus and 4K video capability. There are a host of Fujifilm image modes on offer, which change up the style of your photograph and you can even take a “classic” type photo, which I liked. You can choose from a variety of lenses to suit your needs. There’s also some really fancy image tools that scared the hell out of me. The camera itself is light weight and comes with a 24.2MP imaging sensor, quick face detection and fast auto-focus. 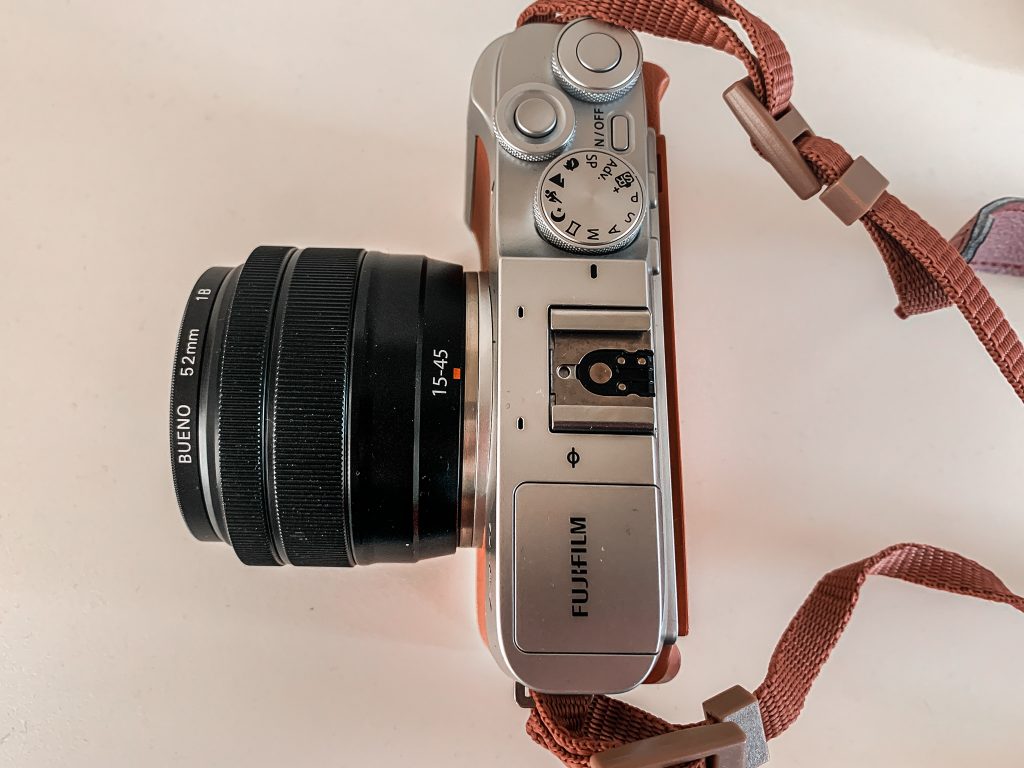 I’m a point and shoot kind of girl. So I wanted to see how the camera would hold up to that experience. I took it out, switched it on and decided to shoot. There’s a 3.5″, 16:9 LCD flip out screen. I didn’t really like the screen. I prefer having the screen on the camera, flipping out, for me, was a bit weird when it came to lining up shots. Though Player 2 tells me this is something you get used to. I really didn’t like that the camera didn’t have a view finder. For the most part though, flipping through the various settings and just tapping the screen to focus where I wanted was easy as pie. I hardly had to adjust photos and could really point and shoot. The camera, without any fiddling takes gorgeously bright photos. I’d presume this would be great in low light but I found it washed out some of my pictures in bright day light – so you’d need to adjust settings to rectify this. All the pictures used in this review where taken with the Fuji X-A7 and completely unedited (all I did was add a watermark and resized them):

I was really impressed with the quality and ease of use. When I handed the camera to Player 2 and he fiddled around with the variety of options available, he was impressed. I’ve been using the Fujifilm X-A7 for a few more photos which I’ll share soon and the more I’ve used it the braver I’ve got. There’s so much you can edit and change on the camera itself to get the effect and feel you want. I’ve also got used to the extra brightness, which I can tweak in Lightroom after and, personally, I found gave me a bit more to play with if I wanted to add darker tones. Unfortunately going pink or lighter washes the pictures right now. 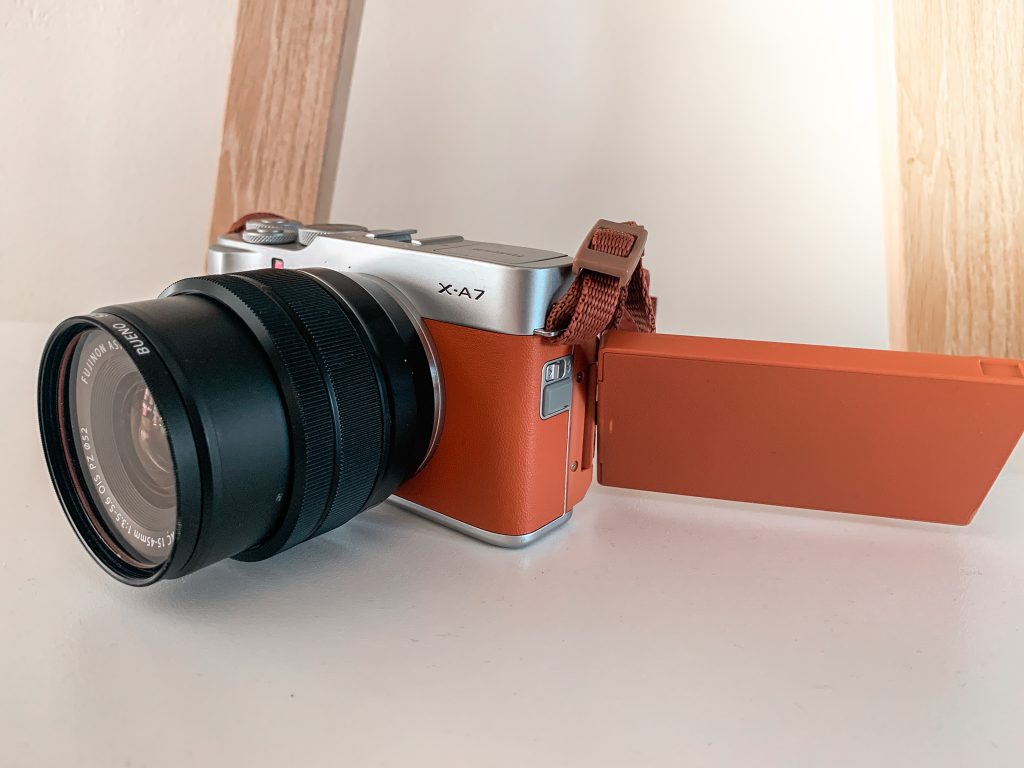 The only thing I didn’t do with the X-A7 was film. I currently have someone filming and editing my videos so didn’t really have a need to film anything. He does use a mirrorless camera though. The X-A7 records 4K video and has a frame rate of 30fps. Because of the flip screen it is ideal for vlogging and also has a face and eye detection feature. You’ll be able to ensure it focuses on one of your eyes and don’t risk having your face blur out (an issue I’ve had with a DSLR and my trusty vlogging cam in the past – where it has auto focused elsewhere). You’ll need an additional mic for the camera though if you plan to film.

There’s onboard Wifi and Bluetooth to transfer files quickly. 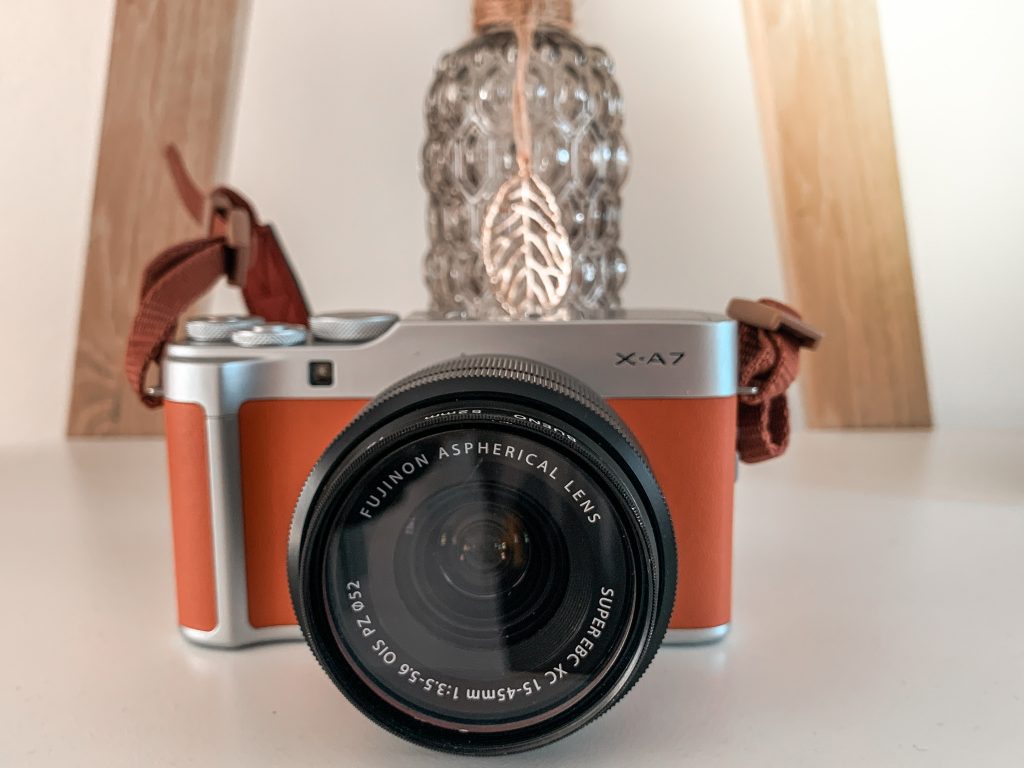 I’m still very overwhelmed by the various features on the Fujifilm X-A7 and where to find them. There’s a lot going on and I’m not really comfortable fiddling too much because it isn’t as friendly as I’d like. The lack of a view finder also bugs me. But, saying that, I really was impressed with the camera as a whole. I love the way it looks and that is it small and rugged enough to pop into a backpack or my handbag. It isn’t a point and shoot, it’s a mirrorless entry level camera targeted at people who’ve been playing with their point and shoots and now want to reach a point where they take their photography to the next level. It’ll likely be a bit overwhelming when you begin, but once you start using it regularly you’ll begin to love what you can do – like I did.

The camera retails for between R12 000 and R14 000 and the lens I mentioned is included on purchase. Keep in mind you might need to budget for a new lens depending on your needs.

Disclosure: I was sent the Fujifilm X-A7 to test out. I do not get to keep it.