Do you think Facebook is lame or only something your parents (Ok Boomer) use? Think again. Yes we have spam, fake news, some really annoying memes, but Facebook does have its moments. For example, just the other day, this gem was doing the rounds (on Twitter).

I go on Facebook for work, to see what other people are interested in, browsing Marketplace (typing in immigration sale is a sure way to find bargains) and for Facebook Groups. There is a group for everything and, while I’m part of a few for all different reasons (SEO, marketing, digital news, books, recipes, etc.), my main focus has been on animal groups, specifically chinchilla and hedgehog ones.

A Tale of Two Hedgehogs

Last year a work colleague had rescued two hedgehogs and asked if I would take one (in my experience, hedgies like being lone wolves). A year before my first hedgehog Spike Lee had passed away and I was really missing having a prickly pig around. I got Axel and he was a rather rotund hedgie who loved his food and wheel. Despite his size, he was really fast and loved running around the house. In March I took him to the vet because he had lumps around his mouth and was told he had eczema. This meant I had to bath him weekly with a special soap. He wasn’t getting better and when I took him back two weeks later, he had to have quills removed and stay over. The vet said he’d understand if I wanted to put him down because of the cost involved, but he said Axel had a fighting chance.

I had joined the hedgehog group when I had Spike Lee, so in addition to seeing cute pictures of everyone’s hogs, the Facebook Group is a great way to learn more about hedgies. I asked if anyone had had a similar experience. People offered a lot of support and tips. The great thing about this group is that no one judges. They’ll only offer tips and in my experience are always civil.

Throughout his illness, Ax still loved running on his wheel and never lost his appetite. I really thought he was getting better. I got the call at work and knew it was the right thing to do. I went home and started to clean his cage and pack away his things. The Facebook group provided a lot of comfort and stories of how some people had lost their hedgies made me realise I wasn’t alone. 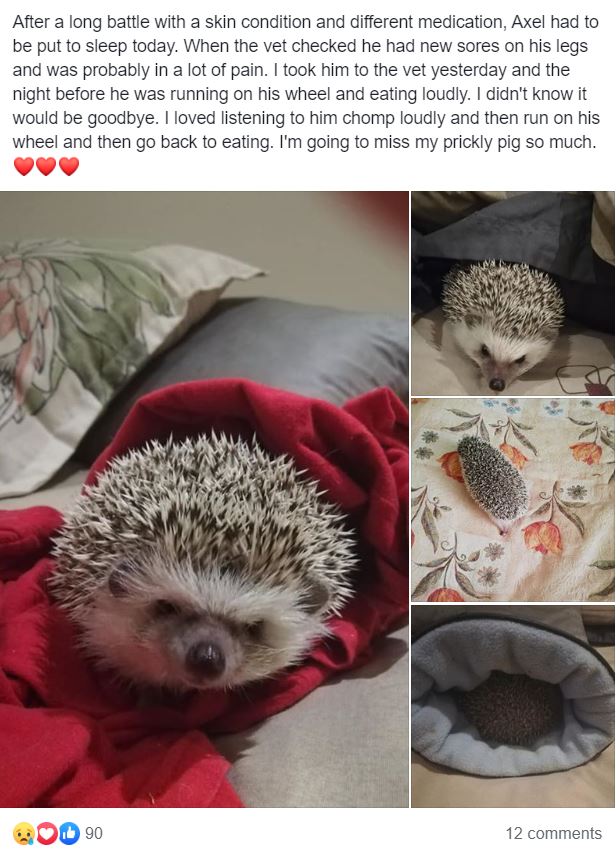 Maurice was given to me as an anniversary gift. I had wanted a chinchilla for years and had no idea my SO had got me one. I used to sit with him every morning, give him his breakfast, let him have his dust bath (he’d go to the container and wait for me to open it) while I drank my coffee and ate my breakfast. He chomped everything – sometimes I was just impressed with what he had managed to chew. He had his own room (free-range chin) and whenever we had guests, I’d clean his room and move him into his cage into our room. He wasn’t a fan of this, but it was usually only for a few days. When I put him back into his room, I noticed he wasn’t really eating. Chins can be moody, so for the first day, I thought he was pissed that he had been caged up. When I had to give him eye medication he wouldn’t come near me for 2 weeks!

The next day I took him to the vet (as with rabbits and other exotic pets, if they stop eating get them to a vet asap). He had to have his teeth filed down and stay over until he started eating again. It looked like he was going to be fine but on Sunday morning I got the call. I went to say goodbye to him and took his bear with him. So many chins have their own toys, and Mo had so many. I still have them.

The group helped so much. It was so comforting to have people who know what you’re going through. I had feelings of guilt for not taking him in a day sooner, but as many people commented, chins can be moody (it’s part of their charm). 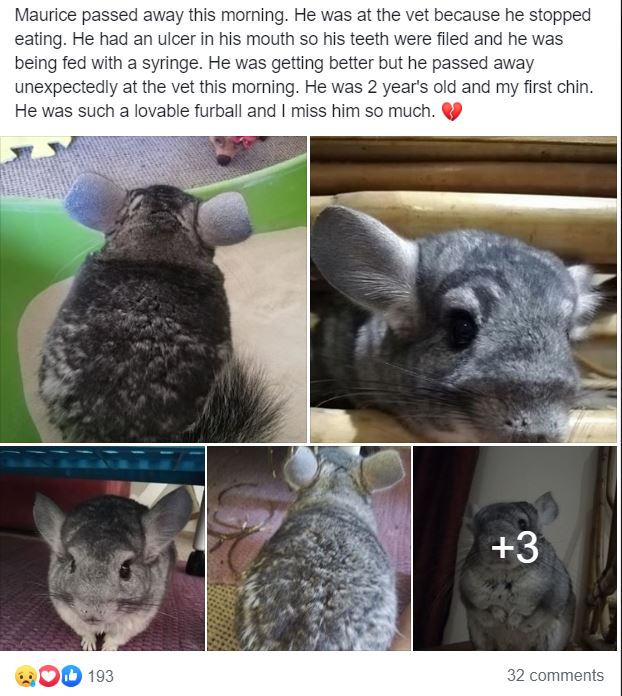 For a while, I had both of their carry cases in my car. It was a stark reminder that they were both gone. Two months later, and I was ready to donate their stuff. I’m not ready for more pets. The heartache is no joke. I miss them so much. Axel was in our room so every night we would hear him crunch loudly then run on his wheel. It was great falling asleep to those sounds. I miss spending mornings with Maurice and stroking him. He had such soft fur and was really funny. He loved cranberries and I still get sad every time I see them in the shops.

I still follow these groups, but it is getting harder because every time I log on I see hedgies and chins and when they pass away, I feel like I’m re-living it all over again. It hurts, and as an empath, I feel sorry for what people are going through. But then there are those cute moments of chins and hedge pigs living their best lives. These groups helped me when I had questions, showed me how I could take better care of my furkid and prickly pig and comforted me when they passed.

Facebook Groups are not without their issues. Apparently, Airbnb hosts use secret groups to talk ish about tenants and share their private information, unsolicited medical ‘cures’ do their rounds, and recently about 100 developers may have illegally accessed Group members’ data.

Are you actively part of any Facebook Groups? Why? How have they helped you? I’d love to know. Chat to me on social media or in the comments below.