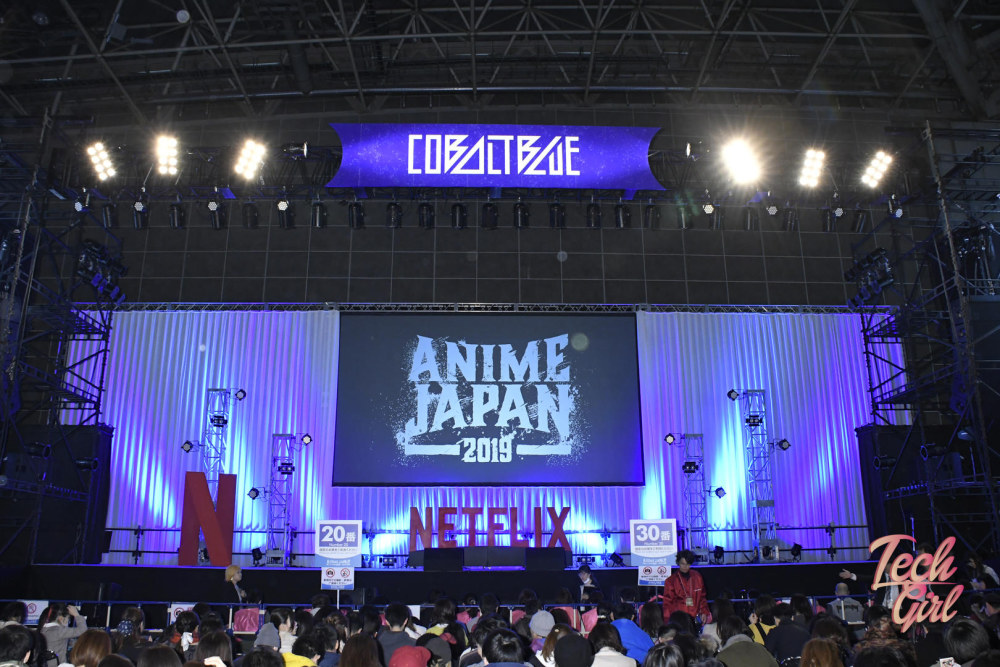 All the new Anime (and some favourites) coming to Netflix

Full disclosure before we begin: Netflix paid for my plane ticket and hotel accommodation to facilitate my trip to Tokyo, Japan for Anime 2019.

Wowsa! The last few days have been absolutely mental. As you know I’m in Tokyo, Japan. I’ve been working on a few things that I can’t really show you just yet (but will, soon, I promise). However, the thing I can talk about is AnimeJapan. I’ve been at this giant Anime Expo for the past two days and it has been the most incredible adventure. I’ve actually struggled to get this blog post out because there is JUST SO MANY THINGS and I want to TELL YOU ABOUT ALL THE STUFF.

It’s impossible though. So I’m going to try break it down and focus on the new anime titles coming to Netflix in 2019… for now.

Before we get going – make sure to watch my AnimeJapan Vlog to get you in the mood ?

Right let’s get into it.

My first introduction to AnimeJapan 2019 was the Netflix main stage event. It started with a rather big announcement and a pretty impressive performance.

The show started with that bombshell followed by a performance of the world-famous song from the anime: A Cruel Angel’s Thesis. Yoko Takahashi performed live on stage. I’ve popped my head into a few Karaoke bars here in Tokyo and almost everyone sings this song. So the performance was obviously a big deal. However, the announcement even more so.

Neon Genesis Evangelion is probably one of the most famous anime known. It had a 26 episode run and two movies… all of which will drop on Netflix on 21 June. Here’s the thing right, I’m relatively new to Anime and I’m constantly asking friends which shows I should watch to “ease” me in. Now I don’t need to ask and I have the answer for my friends – THIS ONE. It’s one of those beloved stories that pulls in science fiction, gorgeous art and a character story that will draw you in and keep you hooked.

The Netflix booth had a stack of fun stuff to do which included an interactive ULTRAMAN game which you can see in my blog and a host of fun panels with producers and voice actors who feature in the various shows. My favourite though was the main stage event where a host of really famous voice talent from a variety of anime titles came together to chat about what new anime was coming to Netflix. Royei Kimura from ULTRAMAN, Nao Tohyama and Jun Fukuyama from 7SEEDS as well as Masakazu Morita and Fumiko Orikasa from SAINT SEIYA: Knights of the Zodiac were all on the stage. Their insight into being voice actors as well as their love for the various characters they portray shined through on stage. They also gave us a taste of what to expect in the next few months.

There’s a few things I like about this particular show. Specifically the way the art has been 3D rendered to create a very futuristic style. The story is also right up my alley: we follow the Knights of the Zodiac, four young warriors sworn to protect the Greek goddess Athena. Teenage angst and Olympian God battles? Count me in!

7SEEDS has been turned into an Anime and it is going to be available on Netflix!

This is kind of a biggie. One of the most beloved mangas has been developed into an anime series and will be on Netflix soon. The story is so catchy and this is probably the show I’m most excited to watch when it releases… purely because I’d love to see how they incorporate this many characters into a show. The world has come to an end but the powers that be had a contingency: 5 sets of 7 young adults have been saved and placed into teams. Now they need to survive a new world.

Oh there is more

Netflix also announced a second season of Baki, currently on the streaming platform and a Netflix original called Kengan Ashura. Basically there are A LOT of good anime shows to look forward to. I’m going to try cover as much of them as I can here on the blog and… I’ve still got some other awesome bits and pieces coming out of Tokyo in the next few weeks which I think you’ll get excited for. For now though, what was your favourite Anime announcement from Netflix? Let me know in the comments below.