In addition to binge-watching enough TV for a lifetime, I also read Manage Your Money Like A F&&^**## Grownup – The Best Money Advice You Never Got by Sam Beckbessinger over the long weekend in April. And like the grownup I am, I attended a workshop at Exclusive Books in Rosebank for the book launch. The free vino was much appreciated because talking about money, especially your own can be tough.

Do you find that the harder/longer you work the poorer you become?

Is adulting about all the important serious stuff? @beckbessinger found that the more she worked the poorer she became #adulting pic.twitter.com/CeOn2siuvh

It seems as though the older we get or the more we adult, the more stuff we need. And keeping up with the Jones’ isn’t cheap. According to the National Credit Regulator (NCR), 25m people in SA have active credit records and 10m have bad credit! Most of this debt comes from bonds, car payments and clothing accounts. 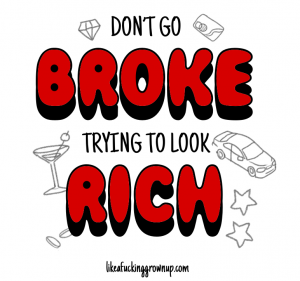 It’s important to take a look at your finances and work out where you want to be. Then put together a plan to get there. And remember that what you may consider a necessity is often not.

Put yourself on a savings plan. Pay yourself first. Put 20% of your salary into savings as soon as you get paid. And if you think that’s crazy, see it as if the government has just increased taxes. You’d pay it and make a plan. – Warren Buffet, Tony Robbins and many more on the importance of saving and paying yourself first

Since reading this book, I’ve downloaded a money tracker app called 22Seven, which allows you to easily track your expenditure and categorise it. My biggest surprise was when I found out how much I was spending on bank fees! Once you’ve used it for a while, you’ll get comparisons, which is also really handy. You’ll also be able to see your net worth (I’ll do a proper review of this app soon because I really think it is amazing). The app really helps you see where you are so you can get to where you want to be. 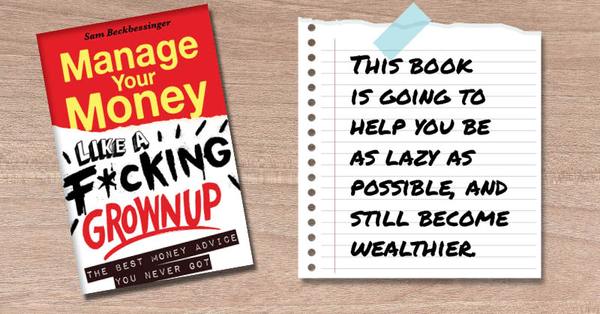 And I must admit, there were some hard truths I had to face, but two months later I am really happy I made this change. Depending on your current financial situation, you’ll be playing different games, like Get out of debt or Saving a month’s salary.

I read this book in a weekend and there were a lot of what Oprah would call “A-ha moments”. And I’ve gone back and reread certain sections a few times since.

To be a millionaire in 10 years time save R5000 a month. That is the joy of compound interest biaches #adulting @beckbessinger @JonathanBallPub pic.twitter.com/82KbMtBauH

What is a goal you would like to achieve? Put a rand value on it and work out what you need to do to achieve that goal. e.g. writing a book or living abroad for 3 months.

How much money do you think you’ll make over your lifetime? It is probably more than you think BUT you have less time.

There are different ways to save money, but I really liked the idea of a f%^&around card. That’s the money you can spend on what you like.

?Being in debt makes your job mandatory. You can’t just leave but when you have savings you can.

?It’s much easier to make blanket changes than incremental ones. Saying no to buying coffee at work is much easier than deciding when you can or can’t. Do the same with your spending.

?Insure what will bankrupt you. Phone insurance may seem like a good idea, but rather use a phone you can afford to pay cash for if it broke or got stolen.

One thing I do now that I never did before, is working out the cost of something per annum. While R499 a month for a phone may not seem like a lot, over a year that is just under R6000! Imagine having an extra R3000 at the end of the year without really trying.

This is the book I wish I had read in my early 20s. It is easy to follow, makes sense and cuts through the BS of contradictory finance info that is out there. Beckbessinger explains bonds, investing, retirement annuities, etc. in simple terms. This should really be taught in schools. I am turning 34 this year, and while I’ve never been particularly bad with money, if I had known what I know now, I would probably be a lot richer.

There is an awesome Facebook group you can join that provides lots of helpful info and is a space where you can ask questions >>> https://goo.gl/jz9DQM

You can buy the book online here and at Exclusive Books.