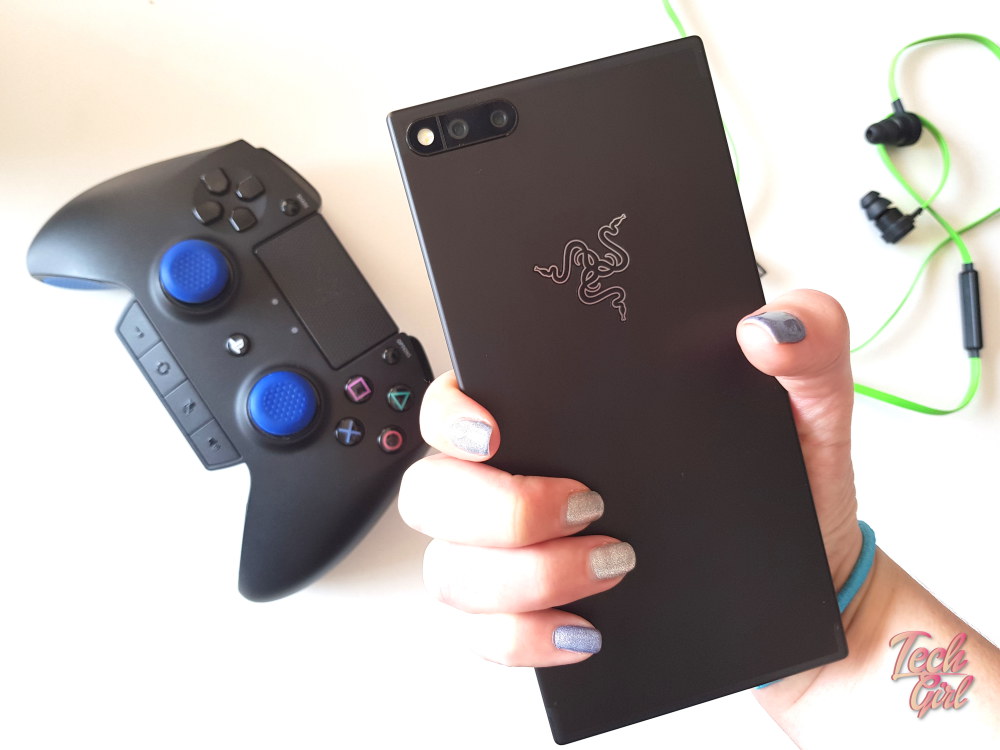 The Razer Phone is coming to South Africa. I first introduced you to the smartphone way back in November when it was released. We still had no word on availability in South Africa. That has since changed. If you want to know costing, where to get it and all that stuff I’ve made a video to help you along:

For now I wanted to actually give you some first impressions after having the phone for the weekend. Let’s chat a little bit about my first impressions and experience with the phone. For starters, it ain’t all that pretty. It reminds me a bit of an old Sony Xperia phone with a very standard design and brushed aluminium finish. The embedded Razer logo on the back is sexy but this phone isn’t winning a beauty contest.

It doesn’t have to though, because it is all brains 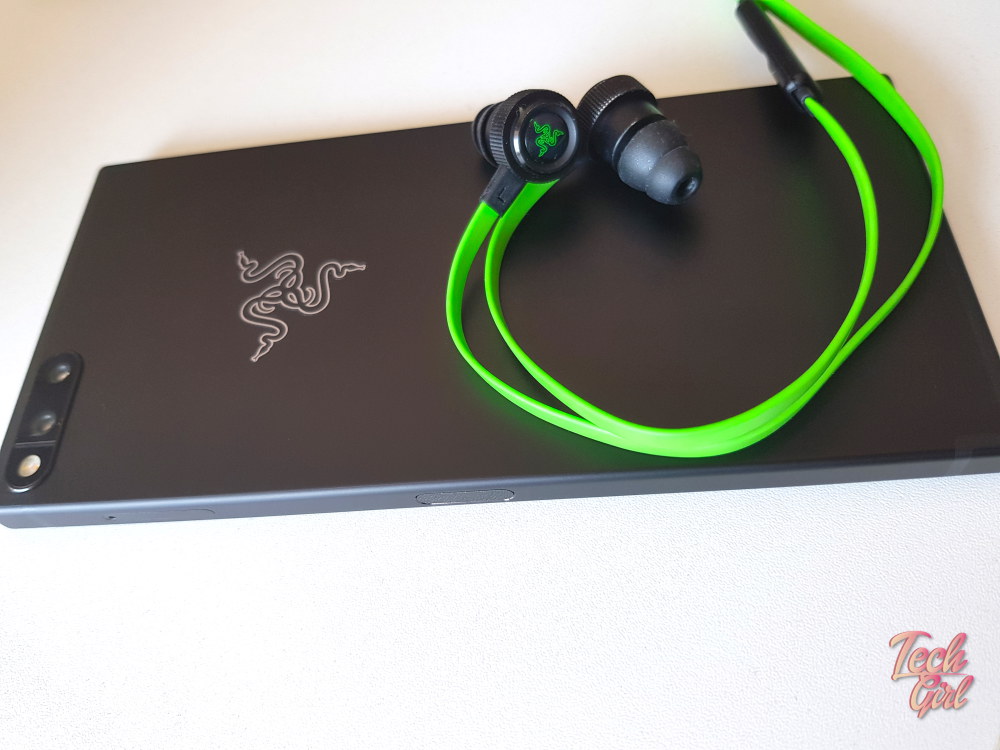 Razer is a gaming brand. Hell, their tagline is “for gamers, by gamers”. Their entry into the smartphone market was very specific and they had a direct market in mind. This isn’t a phone for the average consumer. It has been designed for gamers, mobile gamers specifically. The phone isn’t meant to match your nails or win you a few more Instagram followers with its snazzy camera. Its designed for you to consume media and play games. That’s it. It happens to do that VERY well. 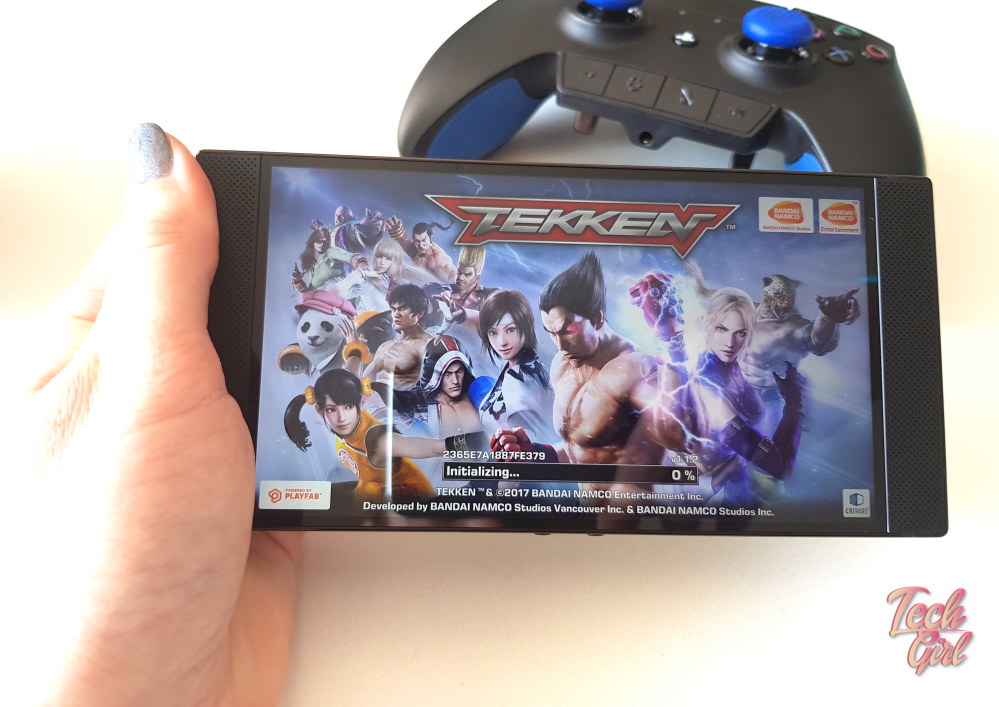 The 5’7″ screen is coupled with a LCD IGZO QHD display. Other phones on the market tend to go the AMOLED route but the Razer phone avoided this purely to ensure quick refresh times and faster frame rates. On switching it on you’re immediately greeted by the clarity of said display. The touch screen reacts fast and is super responsive. This is the first phone to brag a 120Hz refresh rate and it comes as no surprise, if you want to game you want those speeds. But 120Hz can also drain the battery so there is a manual option to change this setting. In fact, the game booster app is something special in this case. Razer has included the app which allows you to customise settings specifically for games. This means when you fire up PUBG mobile you’ll automatically switch over to 120Hz but when not playing the phone reverts back to settings you pre-select. Meaning you can save on battery during the work day. 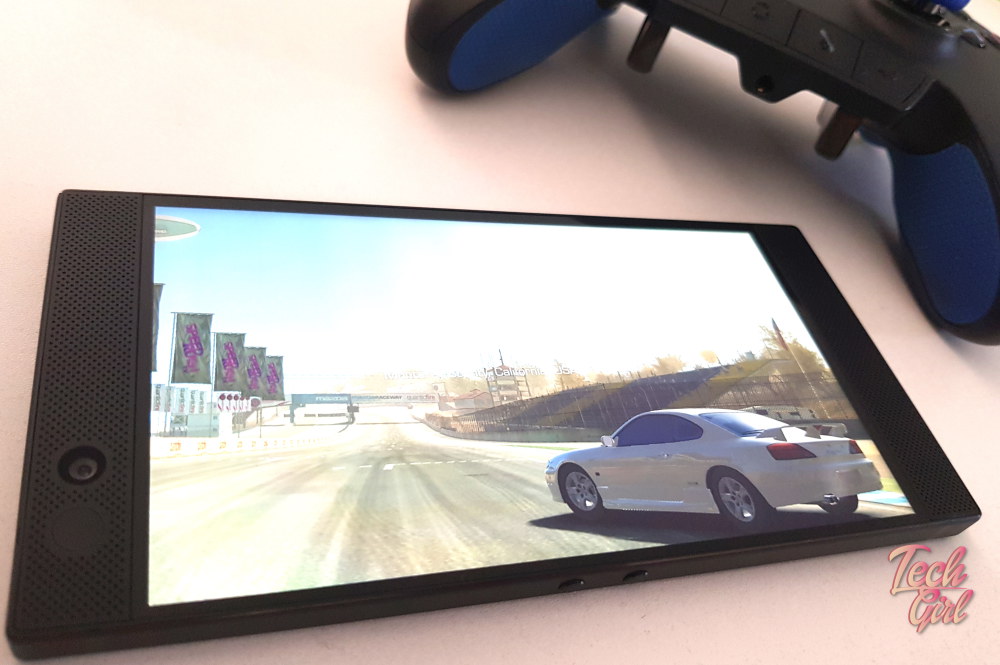 The screen is flanked by two big speakers which are tuned via Dolby Atmos. I wish I could find a way to translate the sound experience to a written blog post but it is close to impossible. Suffice to say the sound is good. You have a surround side type feel which makes gaming a blast but also opens up the phone as a possible streaming source. Netflix on here works a treat. The great display and top quality sound quickly makes you forget you’re on a mobile. The phone charges via USB C and does not have a headphone jack. However, an adapter is included in the box with the phone and this baby is designed to work with the Razer Hammerheads. You’ll have a similar audio experience with the in ears as you do in hand.

The stuff I was a bit ‘meh’ about – mainly the camera 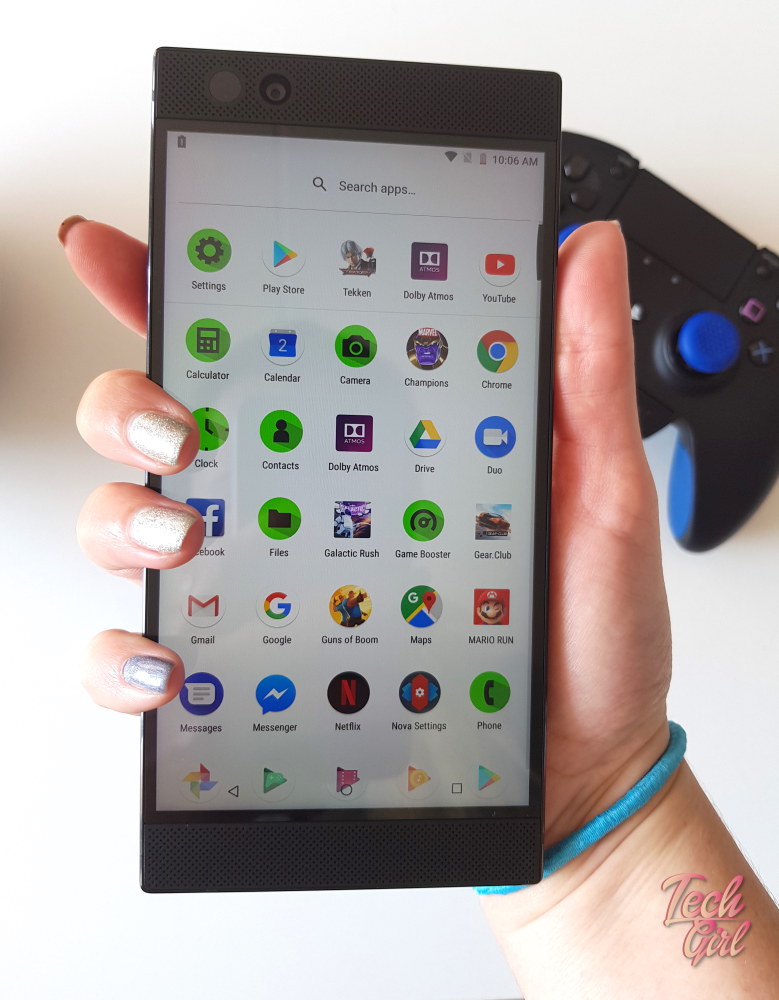 I like taking photos of things. So the Razer Phone’s camera was a bit of a disappointment. It has a 12MP dual camera on the back with a telephoto and wide angle lens respectively. Their is an 8MP selfie cam on the front. The camera needs some help. Razer has agreed and mentioned they’ll roll out software updates for it but for now, it disappointed me somewhat. The battery, on 12oHz ain’t great. But the truth is, if you use the game booster app then that won’t matter and suddenly the 4000 mAh battery is a thing of beauty. You’ll get a full day of use out the phone. 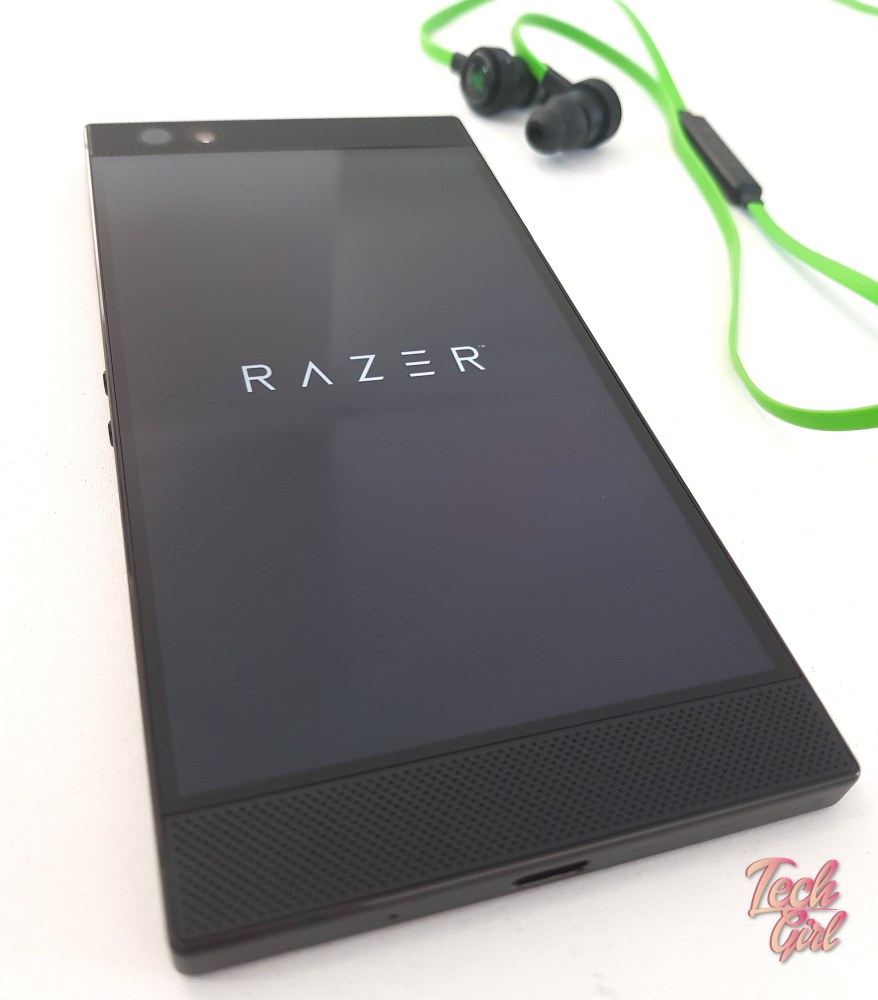 It is pretty clear what happened during development of the Razer Phone. The company focused on one thing: making a great gaming phone… and then they did this. For mobile gaming and content consumption there is not a phone on the market that rivals this beauty. It lacks the usual bloatware paired on to Android and keeps the user experience simple and enjoyable. It is incredibly well made for the job at hand. If you’re a mobile gamer there are no questions here – you need this phone. However, if your biggest foray into mobile gaming is Candy Crush you’re likely going to be a lost as to why you need a phone like this. You should get it anyway and you’ll likely find yourself wondering why you didn’t venture past Candy Crush earlier! 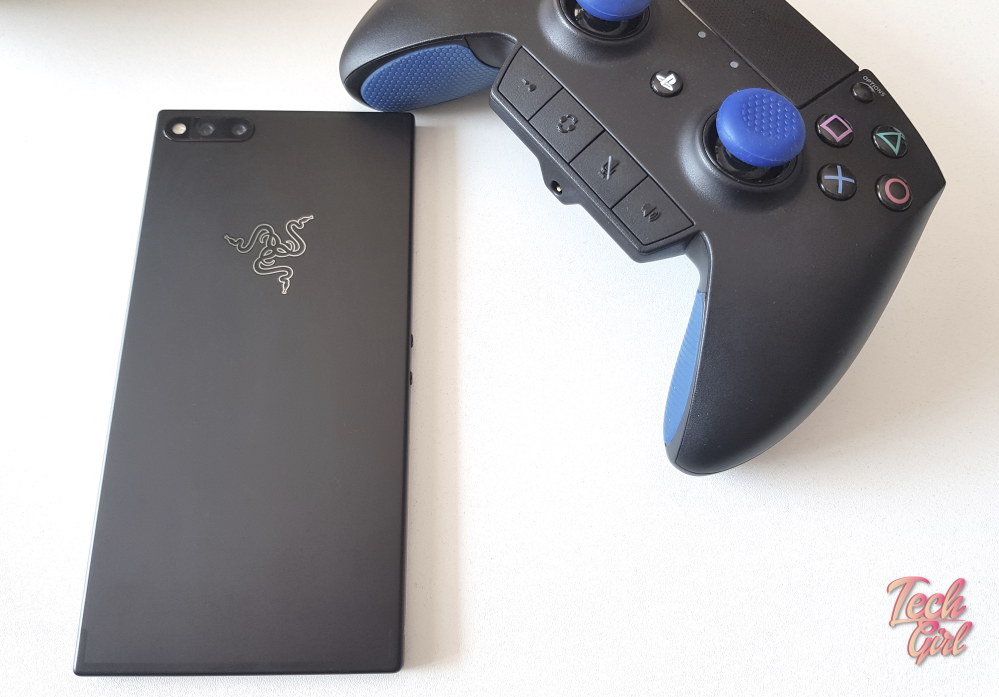 Disclosure: I’m a Razer Brand Ambassador in South Africa. I was given this phone to test out for the weekend and it was then returned as it was a demo device that had recently arrived in the country. 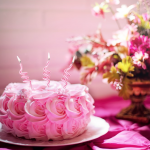 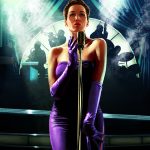 Ever wanted to be a detective? This is you lucky day, punk! LA Noire Remastered Review