I love my cellphone, I consider it to be one of the most convenient and life-enhancing devices that I own.

My phone gets used for everything, from waking me up in the morning to telling me it’s time to go sleep at night, reminding me to drink water and tracking my fitness, to getting me where I need to be thanks to maps and allowing me to have a camera and torch on me always, no matter where I am, oh and every so often it gets used to make a phone call as well.

But jokes aside, my phone really is a vital part of my day to day life – for better or worse.

Over the last year that I’ve been a part of Tech Girl I’ve had the chance to play around with a whole bunch of different smartphones as they’ve launched, each one having areas where they shine, and areas where they didn’t, but the one thing that was seemingly constant among all of these vastly different phones? The battery life on all them pretty much SUCKED.

Then I picked up the Xiaomi Redmi 4X and never had to see my phone die on me ever again. 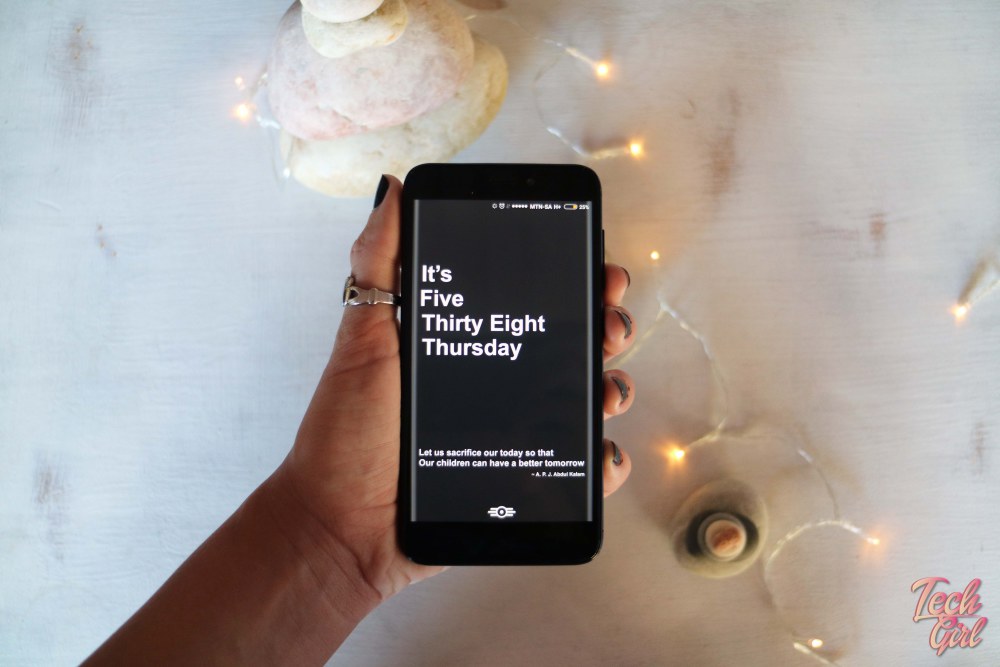 This might be an exaggeration but only a slight one, but before we get into all that let’s first talk about Xiaomi itself.

If you’re like me, and didn’t know the name Xiaomi already, you probably should. They are a China-based electronics manufacturer and since their first phone came out in 2011 they have become China’s largest smartphone company and the 5th largest in the world. The idea behind their phones was to create a phone that was ‘smart’ enough to be able to hold its own in comparison to other phones in the market, while being cheap enough to be accessible to everyone, not just a small minority, and since then that core idea has never changed and it works.

The Redmi 4X that I got to play with would best be described as a Mid-Range Smartphone, on a budget.

Going for roughly R2000 a phone and being easily comparable to my iPhone 6 – you can see why Xiaomi is becoming as popular as they are. But that’s enough of that, let’s move onto the bit where I tell you the top 3 reasons why the Redmi has become my second phone and why I think you should consider it too: 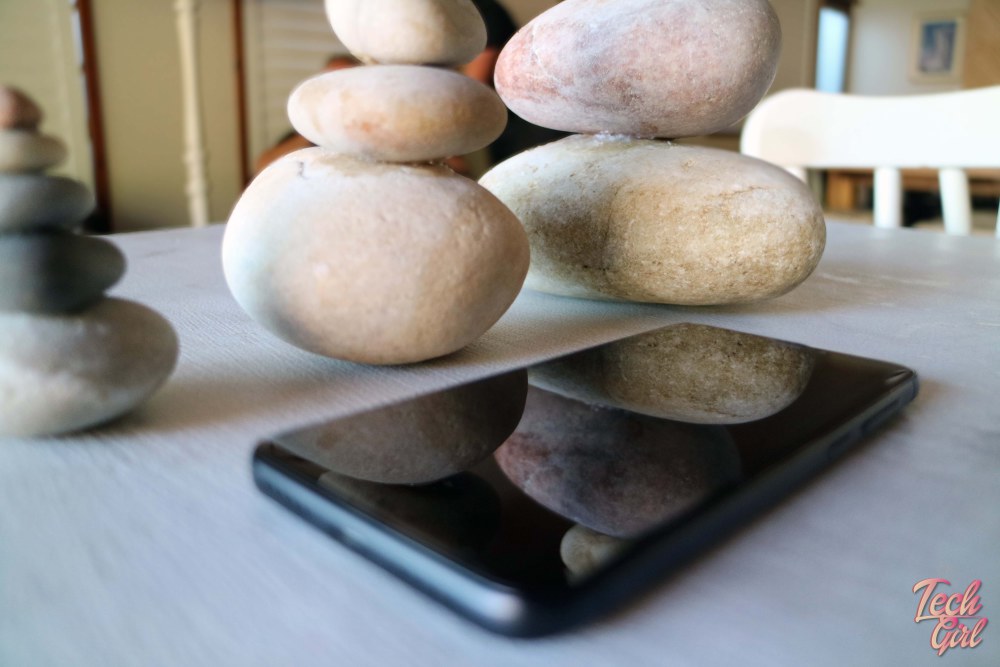 As I mentioned earlier I really am a ‘power user’ when it comes to my phone. I start using it from when I wake up in the morning until I sleep at night and that means I spend about half my day with a phone that’s just barely managing to cling to life at 1% while I look for a place to charge it. Recently I’ve managed to cut a lot of this ‘MY PHONE IS DYING!’ stress out of my life by getting a charger in my car for while I drive and also getting two small power banks so that I can charge it when needed without having to constantly be on the lookout for a power source.

When I got the Redmi 4X my expectations for the battery weren’t all that high, if I could charge it up and then get 8 hours of my type of use out of it before I needed to charge it again, I would be happy. Imagine my surprise and delight when 40 hours later I was still sitting with a usable amount of battery.  I’ve been using the Redmi 4X for about 3 months now and in that time I’ve forgotten to pack in its charger more than I can count and not once has this been a problem. If you’re a power user like I am you can expect roughly 40 hours of battery life with ease, and if you’re a casual user like my partner, you can charge it up on Friday morning and still have power Sunday evening. 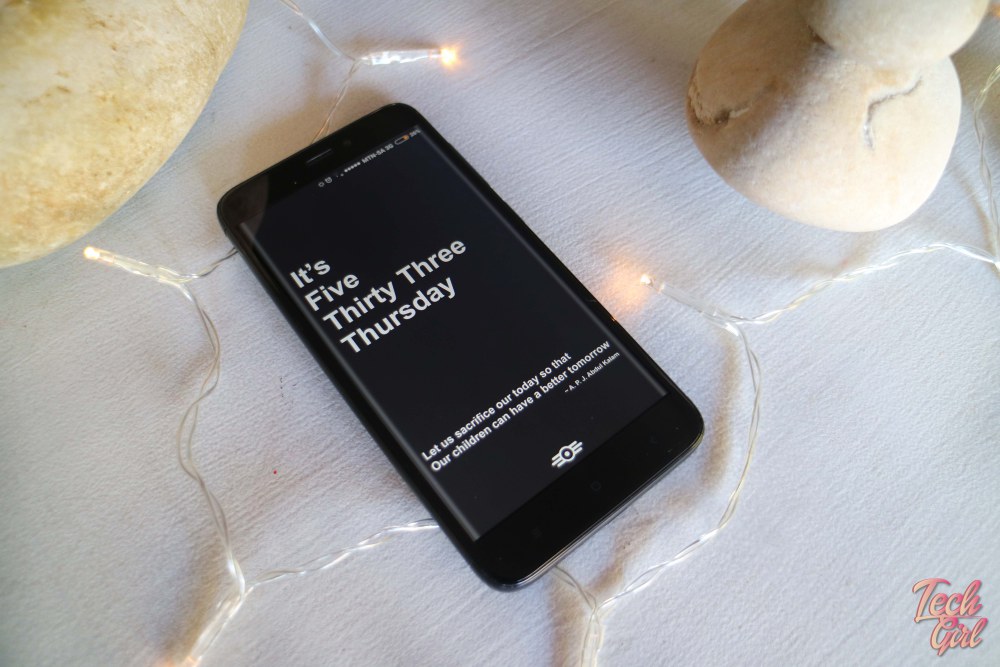 I know there’s that saying ‘don’t judge a book by its cover’ but when it comes to phones today there are so many you can choose from that I feel like a little vanity never hurt anyone. Because of how much time I spend on my phone I really do care about how it looks and how it feels in my hand  when it comes to the Redmi it doesn’t disappoint. The phone is really simple, nothing overly flashy about it, but it’s light, thin, fits into your hand perfectly and feels like it’s covered with a thin layer of silk.  It’s just so damn smooth. There are only two actual buttons on the phone, one to switch the screen or phone on and off and one to adjust the volume.  They aren’t flush with the phone but they also don’t stand out enough that they become an irritation.

At the back of the phone, close to the top, is the fingerprint scanner. Now I’ve used fingerprint scanners that were at the back of the phone before and never really dug it but the positioning of this one with the size of the phone just makes it feel so natural to use that it doesn’t feel like I’m intentionally scanning my finger but rather that my phone just automatically unlocks when I pick it up. It’s not all sunshine and daisies though, this fingerprint scanner is also the most sensitive of all the ones I’ve used, meaning more often than not when I put it in my pocket my leg will actually be picked up by the scanner and it will wake my screen up – not a deal breaker, but it is annoying. 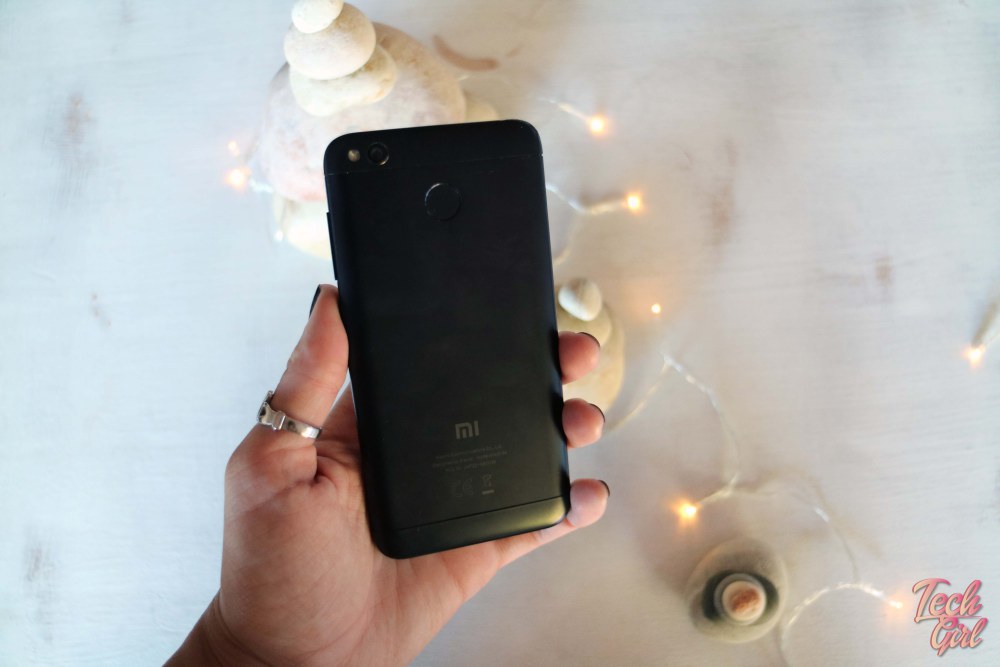 Last but not least we have the camera. Photography has always been this huge part of my life, if I could I would have probably come out of the womb taking pictures of my own birth. On my primary phone, I currently have 18K photos and about 400 videos and I clean these out regularly. I just really like documenting my life, and more often than not, the spontaneous moments that are really worth documenting will only present themselves when none of your cameras are within reach, and that’s where the camera on your phone gets its moment to shine.

When it comes to the Redmi 4X, the camera is both where this phone really stands out and where it sort of fails. I decided to take the camera with me to the beach in December to play around with it and to see how it handles photos and videos without using any of the filters, effects or editing it in any way afterwords and to my surprise, this is what I got: 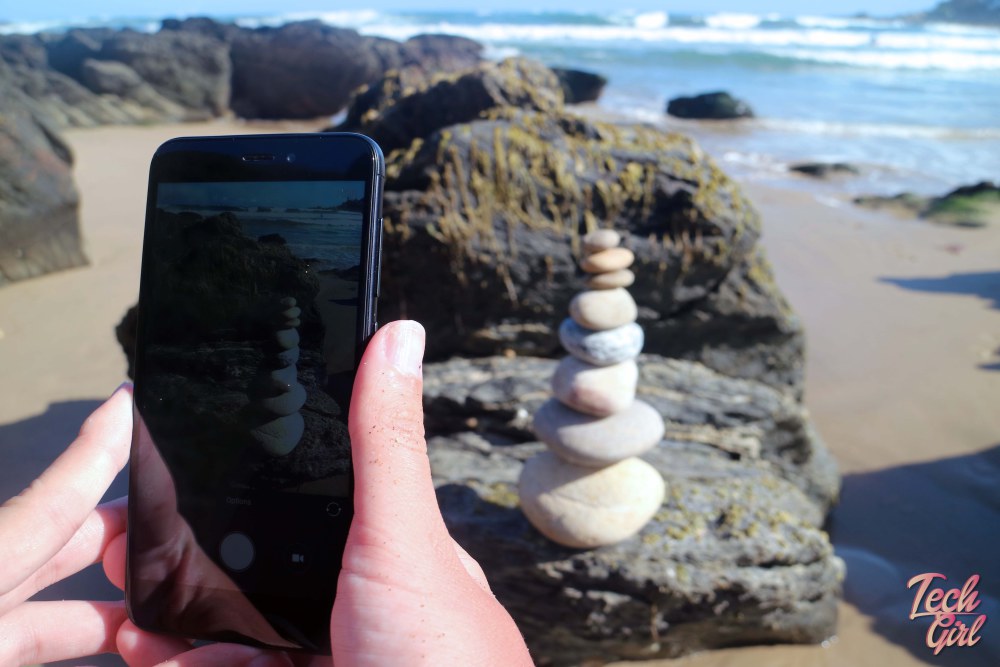 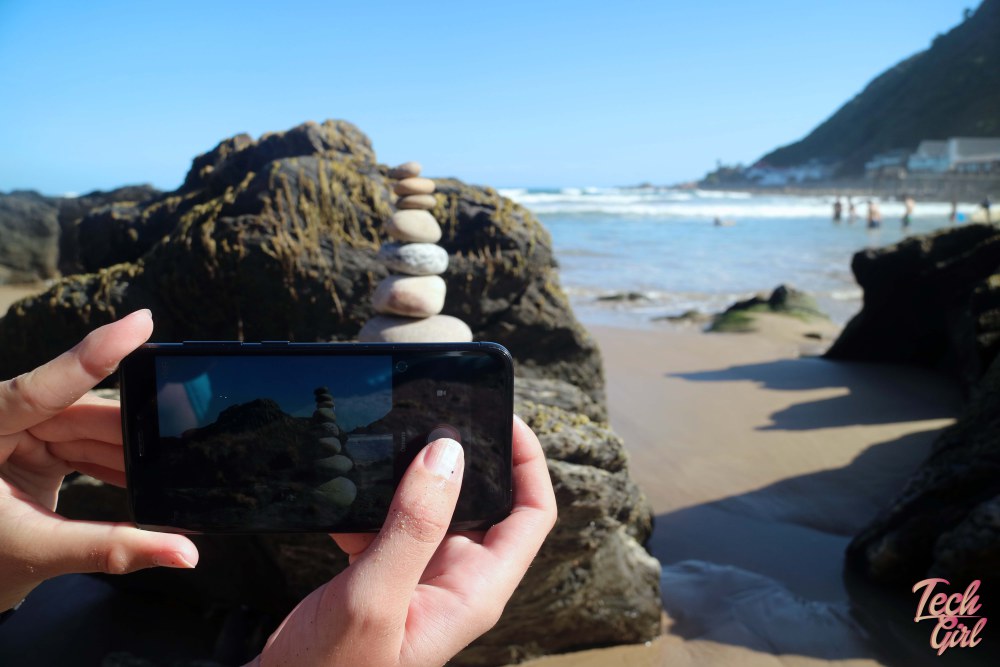 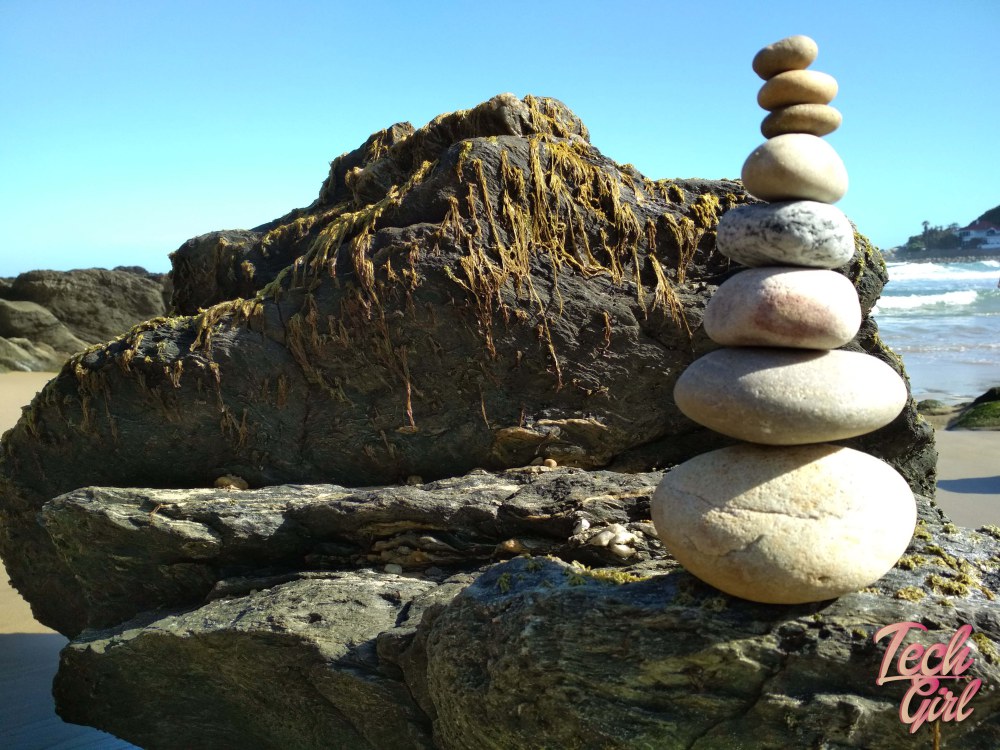 Don’t get me wrong, I’m not saying you should throw your Canon camera away and replace it with the Redmi, but you have to admit these photos came out pretty damn amazingly considering this is a R2000 phone with a 13 mp camera built in. The photos were more than nice enough for me to do a double take and really get a new respect for the phone, however, the video – not so great.

To be fair the video isn’t terrible, but it’s also clearly been taken with a phone and for someone like me who wants to use her phone to get b-roll that I can use for Vlogs or reviews etc it just doesn’t make the cut and really disappointed me. However, if you aren’t looking for spectacular video and just want something to capture video messages or moments you can send to your friends or upload to Facebook then you should be able to get away without it being too much of a problem. 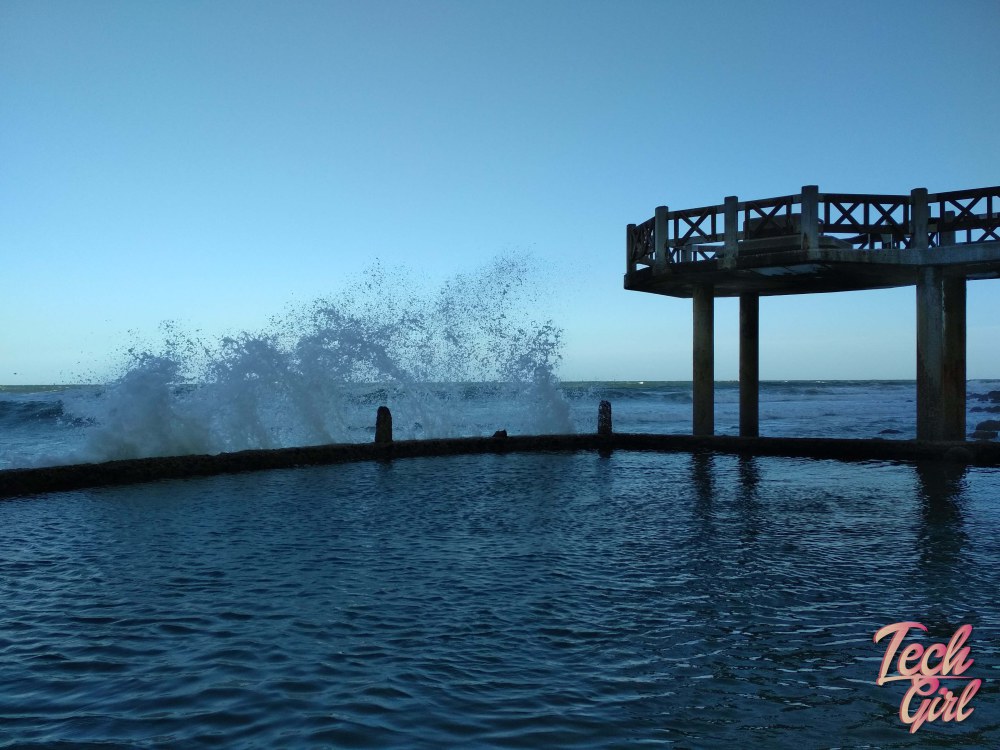 Other things you should know

The Redmi 4X runs a modified version of Andriod Marshmello that runs pretty well while also being easy to navigate and use even if you’re an IOS user like me.

You have the option to run dual sims which is pretty great if you have two numbers, say a personal one and work one but don’t want to run around with two phones.

It’s pretty damn hardy and scratch resistant. I had it with me every day on the beach around all of the rough sand for 3 weeks and there are only two hairline scratches to show for it, I’ve also accidentally dropped it a few times over the last few months and other than the mini heart attack I’ve given myself each time its hit the ground, nothing else was wrong.

Finally, when you take a front-facing photo with the phones 5 MP camera, it tells you how old it thinks you are – something that’s really amusing and funny right until you wash your makeup off and it tells you you’re 90. 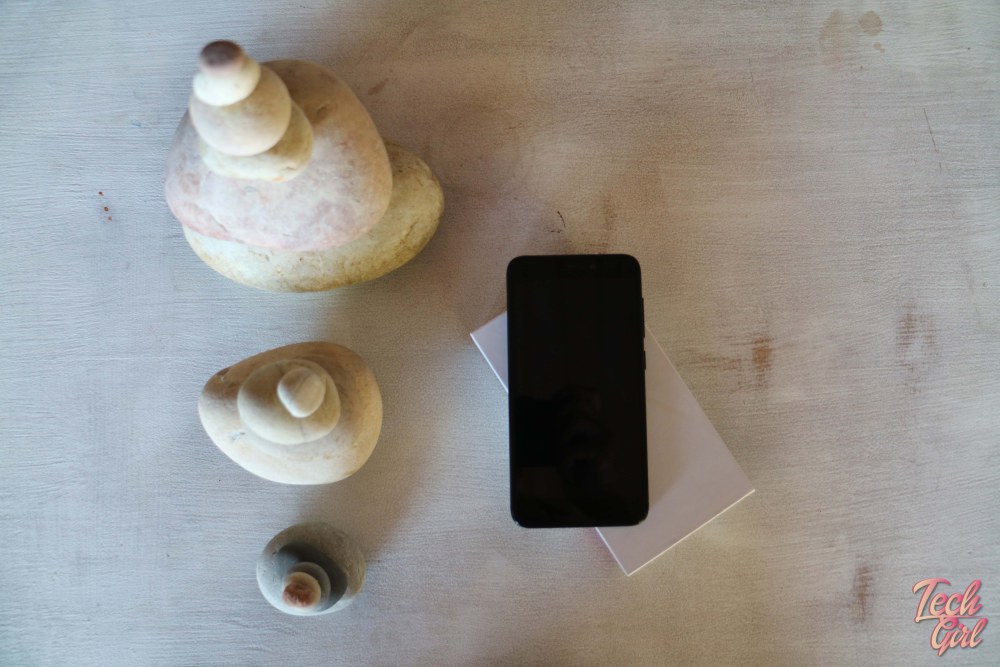 All things considered, this is pretty much the most impressed I’ve been with a phone since the first time I picked up an iPhone.

Since having it, I’ve used it every day and recommended it to family and friends as far as I go, there really isn’t a single thing about it I would say is a deal breaker and when you consider that you can buy it outright for R2000 and not feel like you need to tie yourself into a 24 month contract to get a phone. I’d say that’s pretty damn special.

If you are looking for a new phone that gives you all the features and joys of a high-end model but without the commitment or price tag than the Redme 4X is definitely something you should look into. 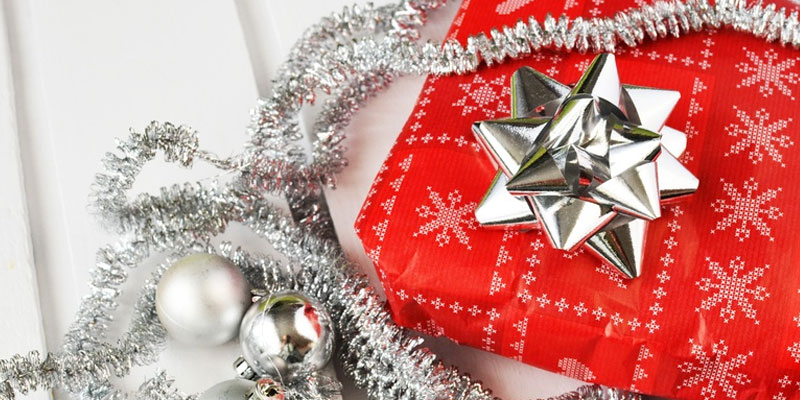