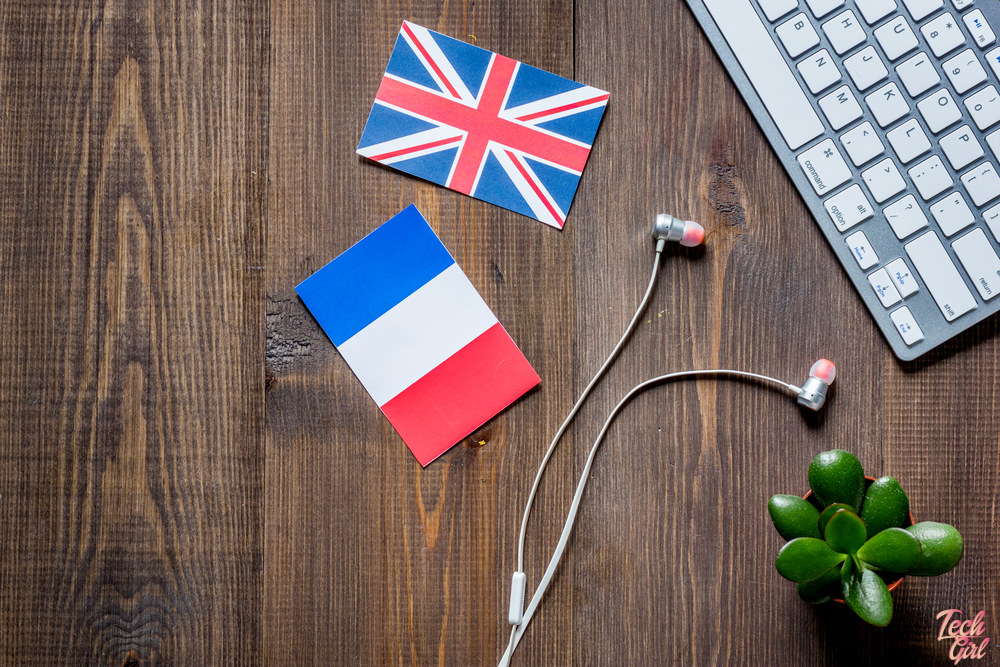 Learning a new Language is Easier than Ever

Sam’s Note: Meet my friend Richard (all is personal info is at the bottom of this piece), who is one of the coolest humans I’ve met in the Esports world. He used language apps to teach himself and it was too rad a story not to share. So his words are below:

Learning a new language can be an extremely daunting task – and can often be a costly adventure because of the amount of times it takes to become fluent in the language you want to learn. However, in this day and age, learning a new language can be done not only on your own schedule, but for free and in the comfort of your own home as well, so there is no reason not to get started!

The Benefits of Learning a New Language

Learning a new language has multiple benefits that come with it from a health perspective, as neurologically and aurally, it is extremely good to do such a thing. There are quite a few things, however, that can hinder your ability to learn a language. This can be thanks to a number of influences, that may seem quite bizarre. How many loud concerts you’ve been too in your life? That can affect your language learning ability (that ringing noise you get in your ears after concerts? That’s called tinnitus, and it means you’ve damaged your ears) because ultimately you need your hearing, brain, and vocal efficiency if you want to perfect any language.

Famed neurologist Oliver Sacks, who happened to write a book (amongst others) with my favourite title of all time, “The Man who Mistook His Wife for a Hat”, spent his life studying bizarre neurological cases to learn more about the brain, especially when it comes to languages and music. His studies found that after a certain age, and depending on your background (musician and multi-linguists had a distinct advantage), your ability to learn a language gets distinctly harder as you get older. This is partly because of “brain hardening”, whereby neurological path become more set in stone as you get older, and the fact your ears naturally deteriorate with age. 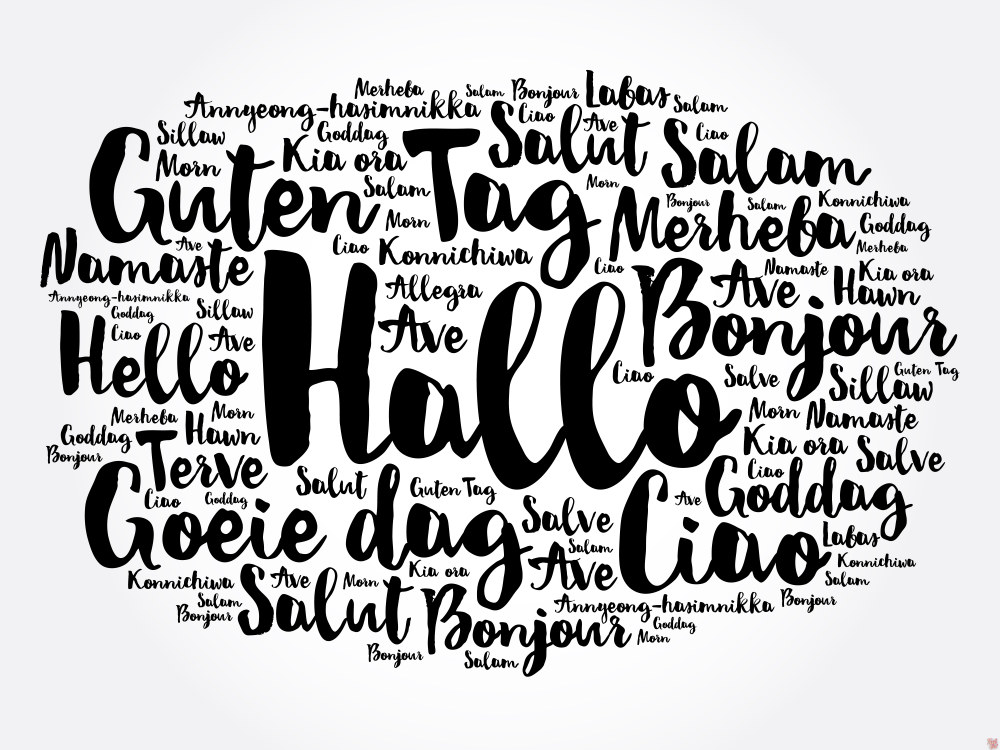 Luckily for South Africans, our multi-lingual education system already puts us at an advantage when it comes to learning a new language thanks to the above, so although you may have hated Afrikaans class at school, it actually helped your brain.The benefits of learning a new language are plentiful – neurologically, it is like doing brain gym, and can help stave off things like Alzheimer’s and other diseases, and can also help prevent ears from deteriorating so rapidly, since it is aural exercise too.

Also, by the end of it, you’ll know a new language! And in this increasingly global marketplace, that is always an attractive skill to have for any potential employer. Even if you just want to have a successful holiday and know how to ask for directions when lost, knowing a language can be infinitely helpful.

So, Where Do I Start?

There are a lot of languages in the world, so this really depends on what language you are keen on learning.

There are three different apps I use for learning Portuguese, each with its own advantages and disadvantages, but ultimately, when combined together, create a really powerful learning platform as well as a way to connect with like-minded individuals. For the more Western Languages, a great place to start would be Duolingo. It is free to download on the app store, and can be accessed through your phone or on your PC, so as long as you have any sort of internet connection or reception, you will be able get your practice done. 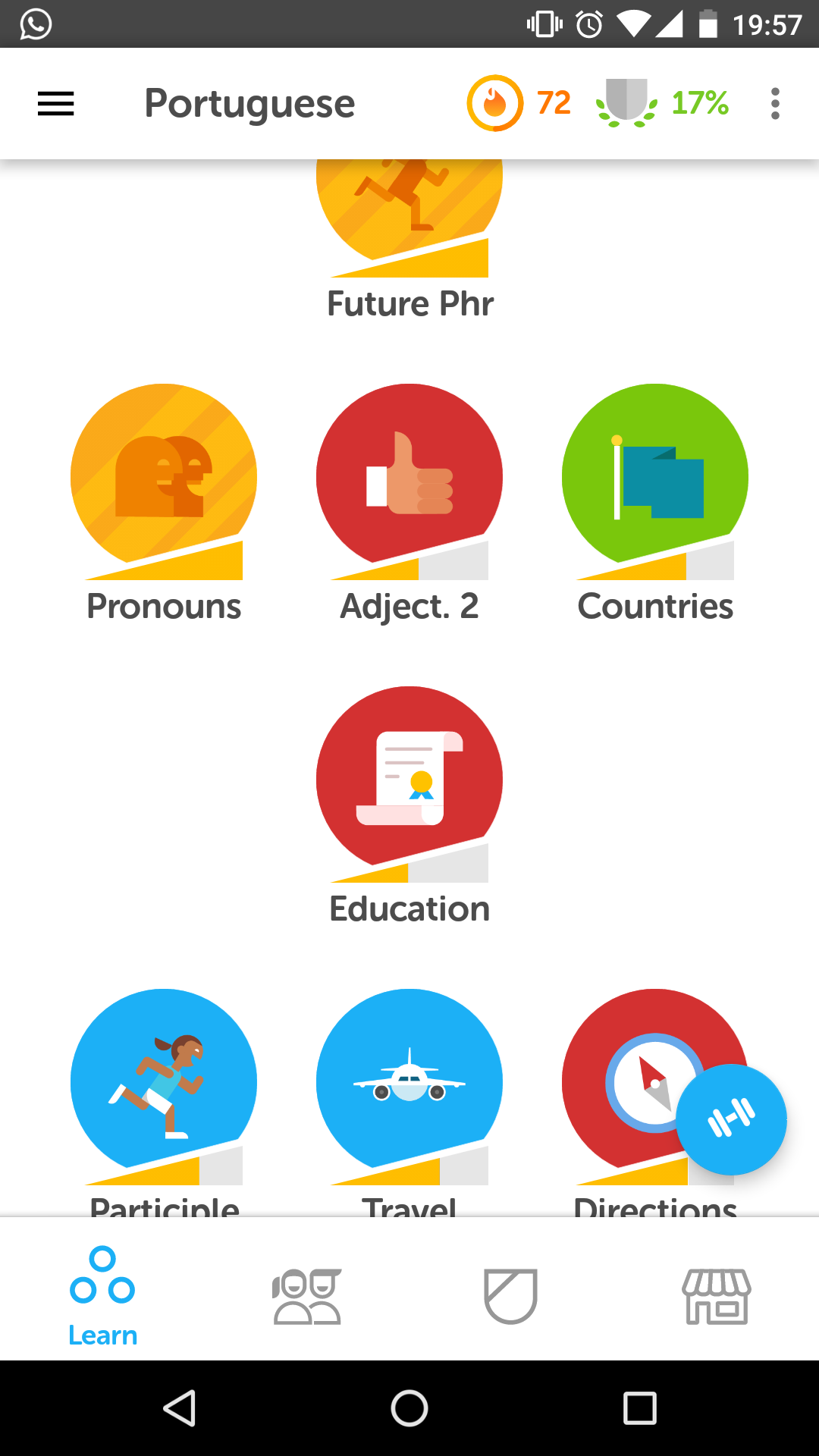 Duolingo’s style of learning I would equate to that of school. You start off very basic, and get more complicated as things progress. The learnings are clumped into groups of subjects, each with their own lessons that will slowly teach you new words, and feels like a very natural way of learning for those that have been through the school process. Probably my biggest nit-pick with the app itself is that it doesn’t overtly teach you the grammar and rules – I had to go Google some grammar rules myself to better understand why I was writing sentences a certain way or using certain words. 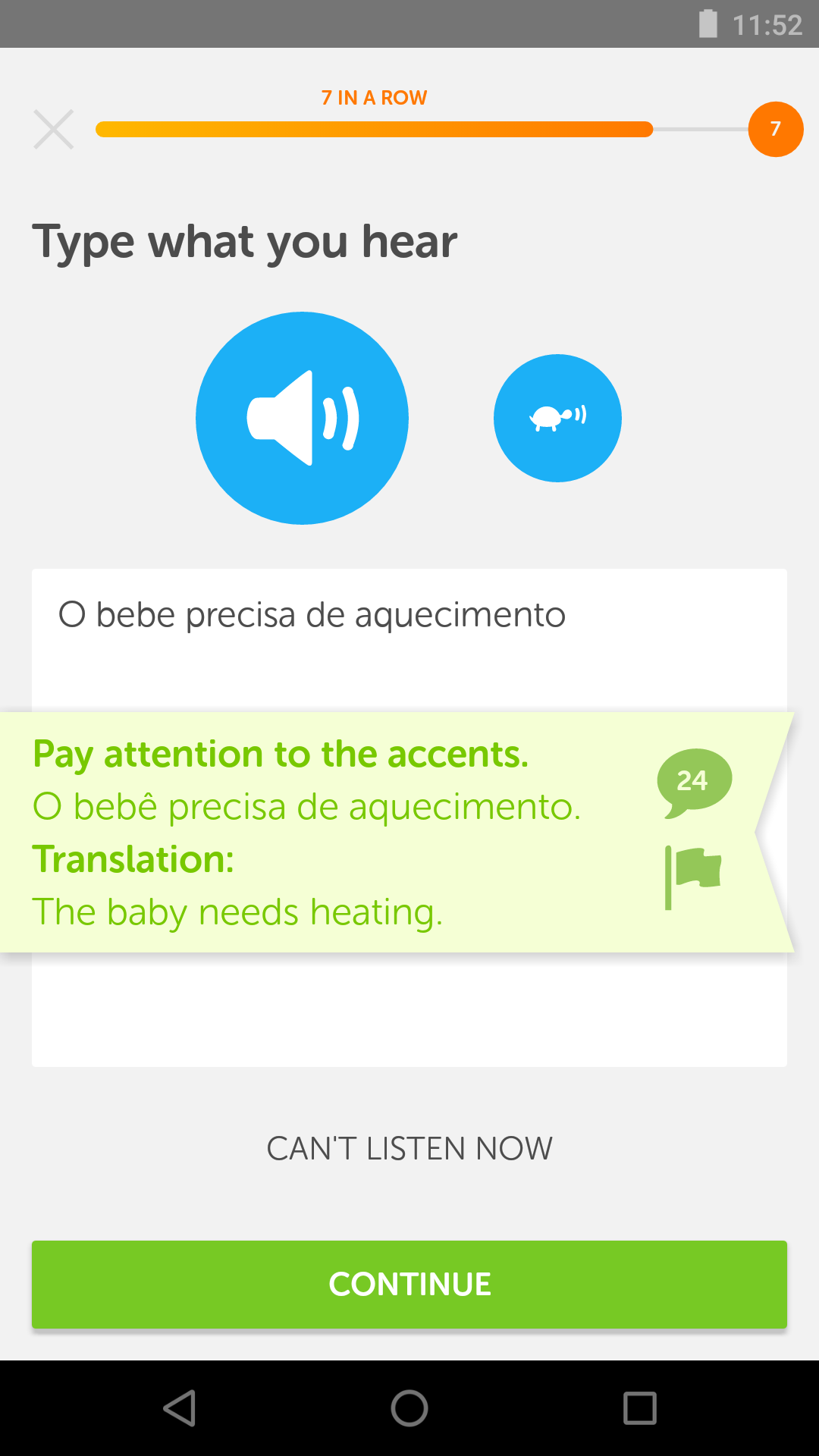 You are also able to set your daily target for Duolingo, depending on how fast you want to learn the language, so what pace you take is really up to you. It also sends you reminders when you have not practiced, which can be both nice and slightly annoying if you happen to be busy.

Since it is a free app there are, as expected, ads after every course that you finish, which is really not that invasive on your learning experience. However, should you wish to have an ad-free experience, or want to download the courses to do offline, there are some paid options available (they have to make money somehow after all), but there is nothing locked behind a pay-wall, so it is only if you really want to, or just hate adverts that much.

For conversational fluency, Duolingo is extremely good, and will leave you with the basic vocabulary needed to get around whatever country you may be going to. It is however, limited in the languages you can learn, and once you have finished all the courses, it becomes simply a matter of repetition to up your fluency rating, so some discipline is definitely required. 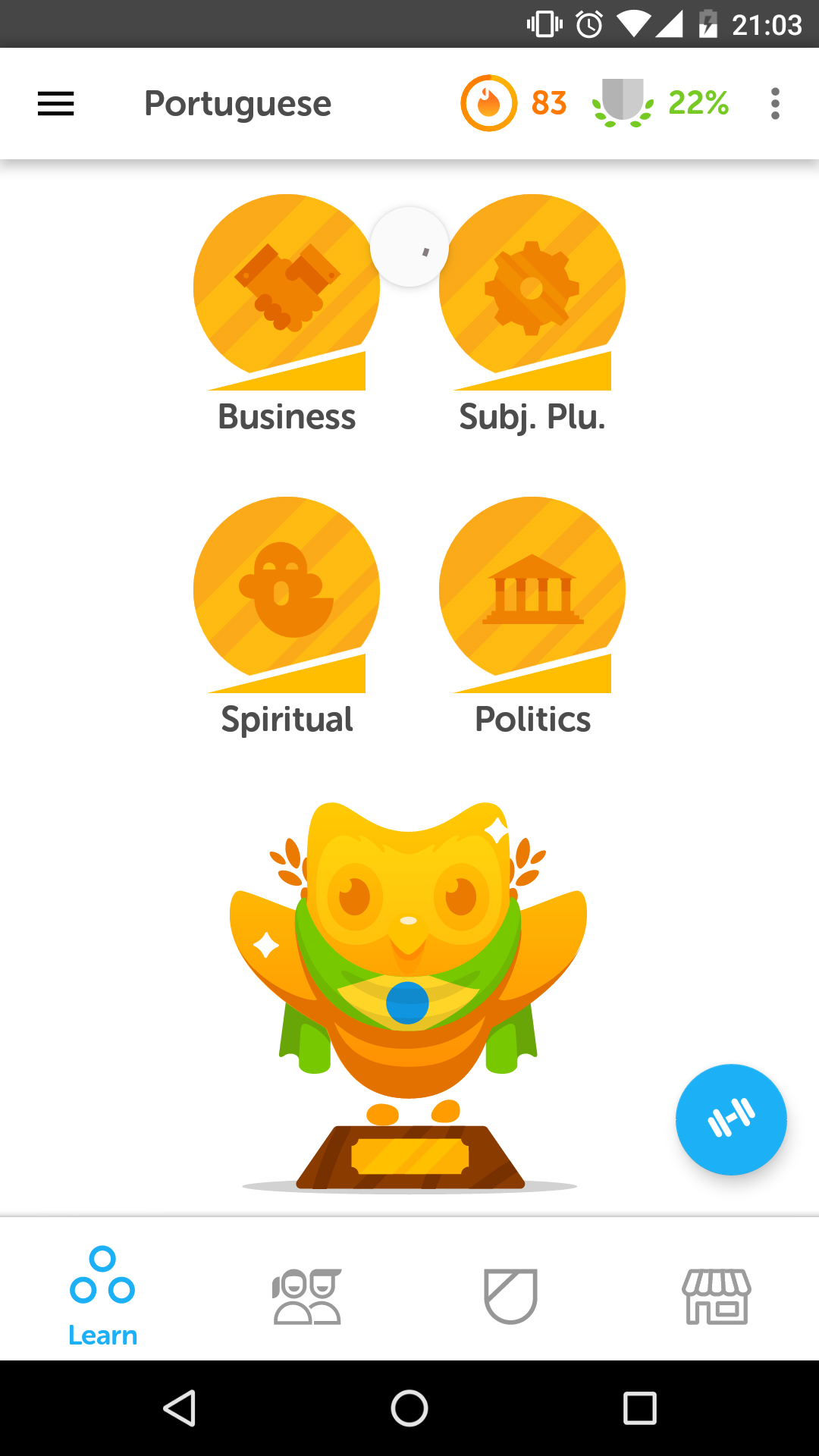 If Duolingo isn’t to your liking, or doesn’t have the language you want to learn, Memrise is the Google-recommended learning app, and has vast array of languages you can learn (including South African Languages such as Xhosa and Zulu). For those wanting to learn Eastern languages, Memrise is definitely the platform of choice. 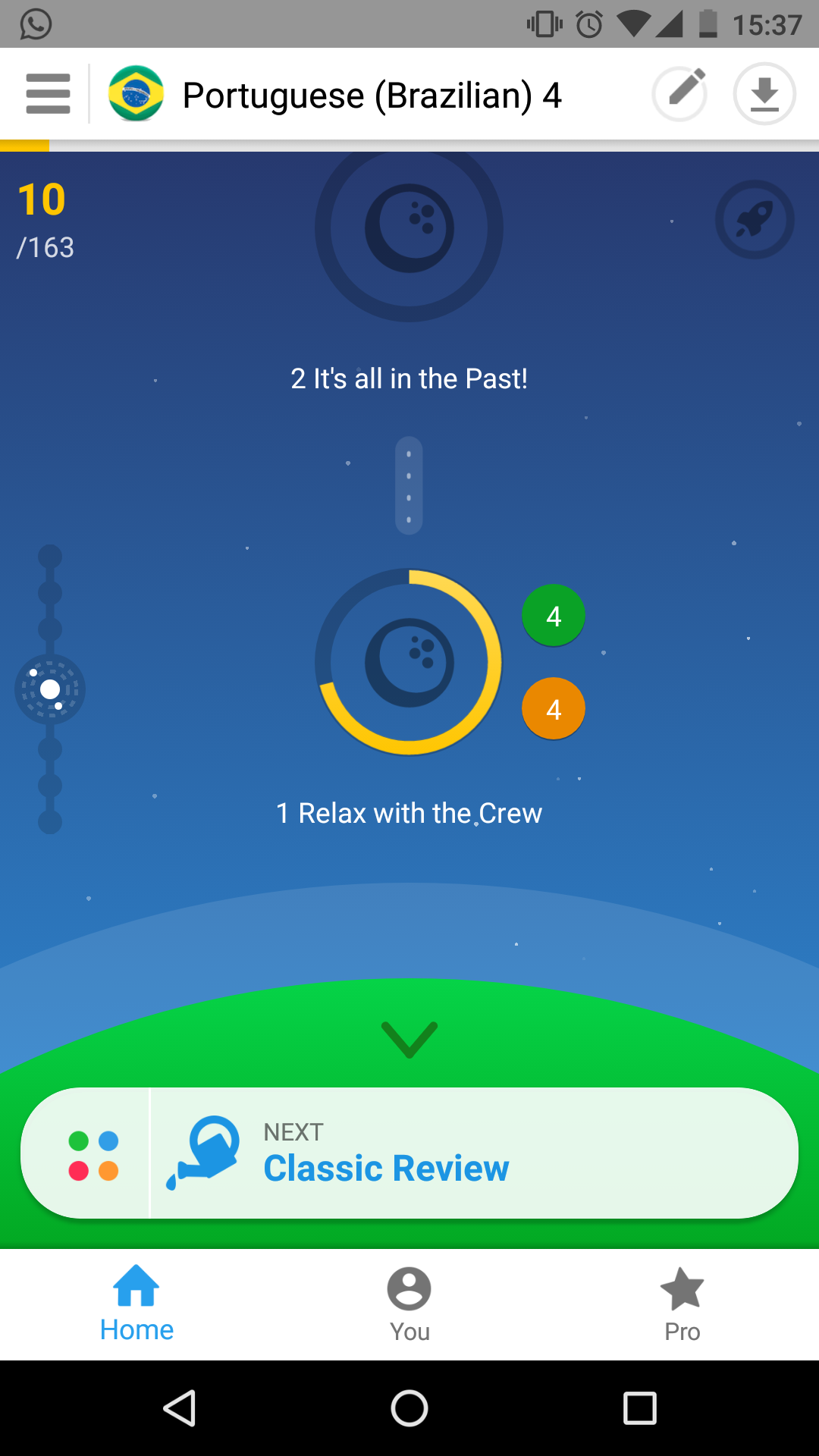 The app itself has a slightly more “game” approach to it, and definitely has a richer vocabulary than Duolingo. The games come in three stages; first, you learn some new words or sentences, which are repeated at you and you have to repeat. Then, you get tested on the phrases you’ve just learnt, to make sure everything has sunk in. Once you’ve done these two, the final game is a test, which may throw in any of the phrases you have learnt up until that point, as well as the new phrases. 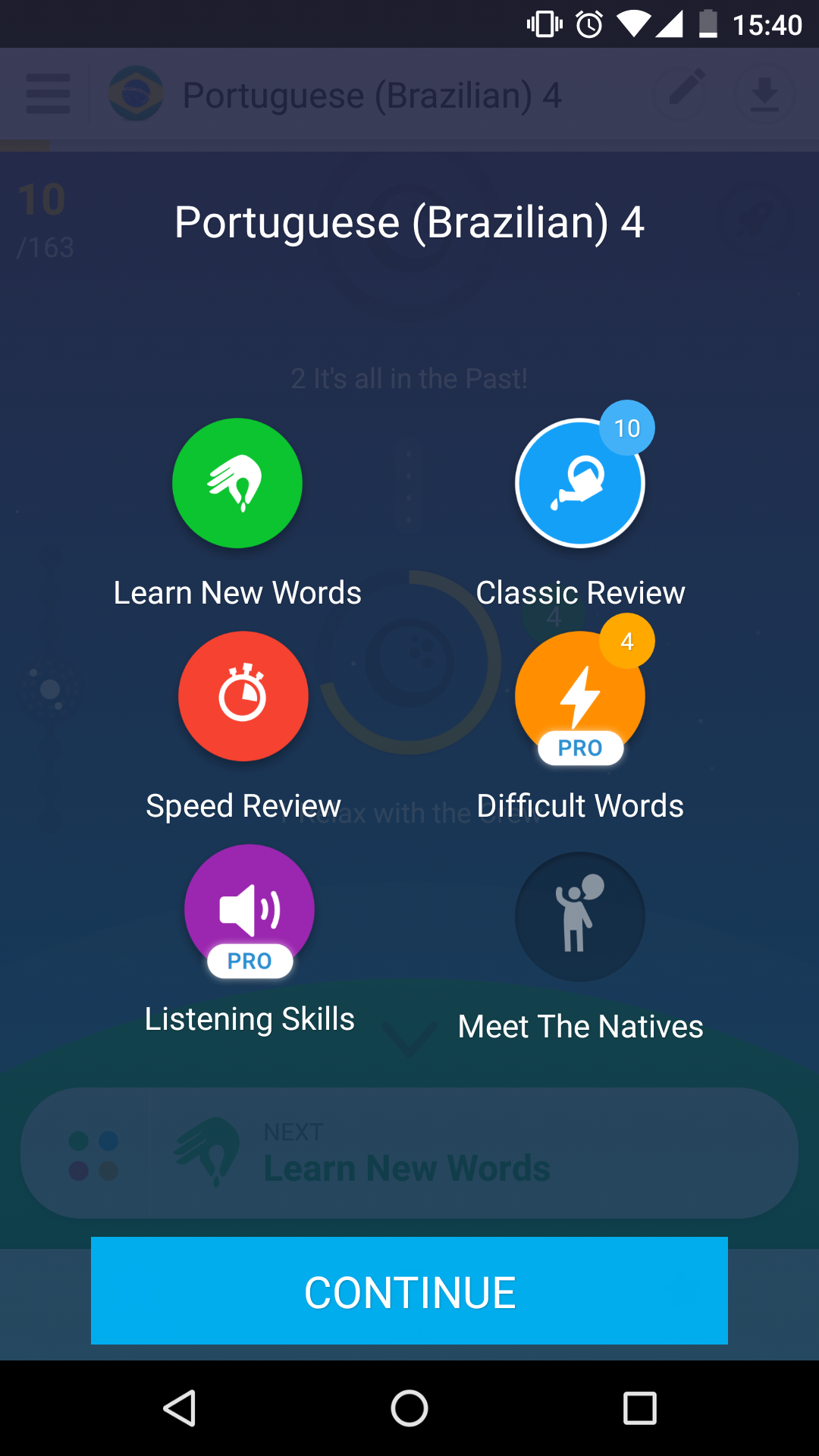 This kind of repetition makes sure you slowly improve on all areas, and Memrise is good at explaining why you did something wrong and how it should actually be, and is actually quite a fun way to learn a language. As with Duolingo you can set how much you want to accomplish a day, and it will also send you reminders should you be lazy, and with its diverse range of languages, Memrise is definitely a good option. 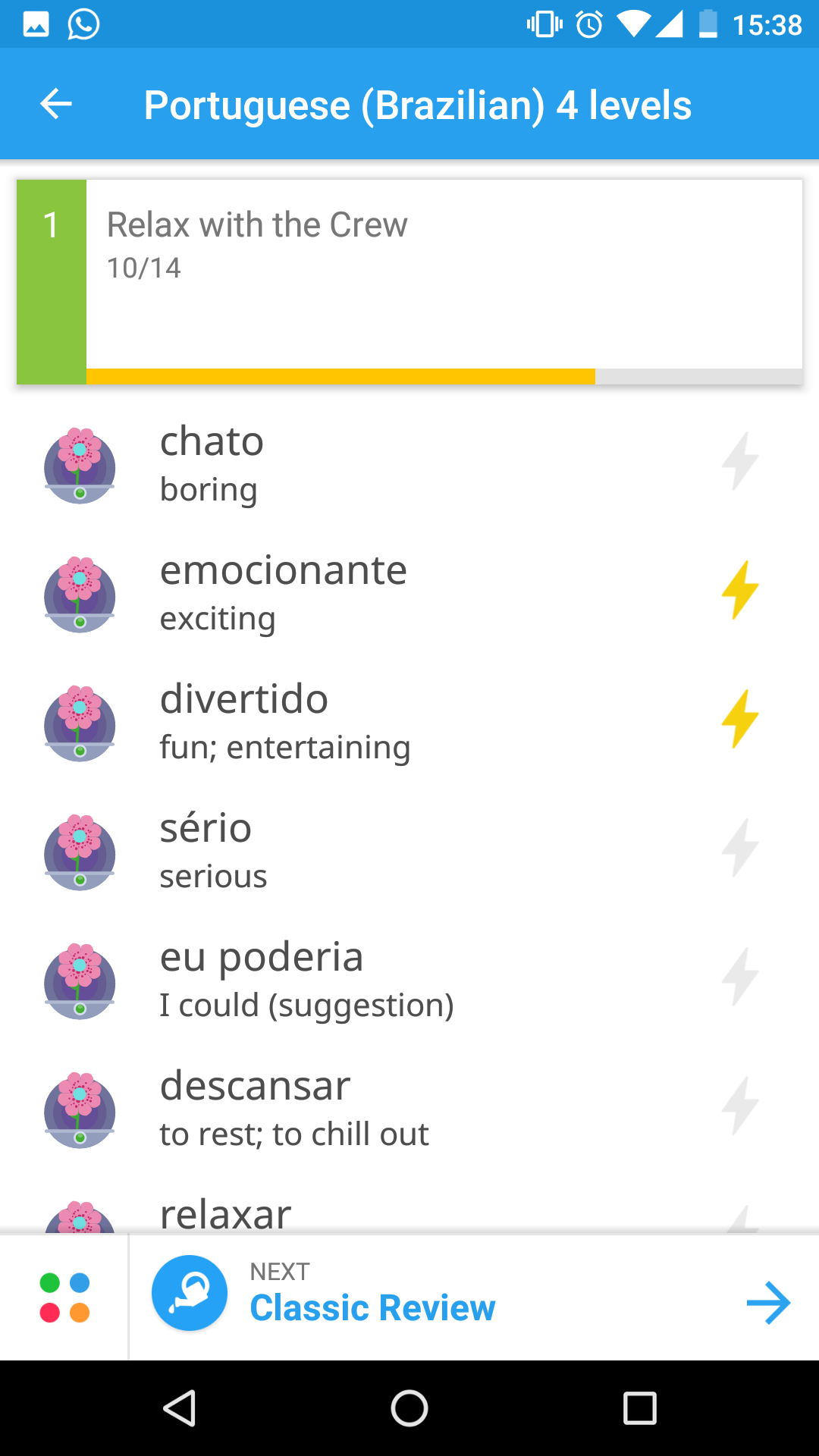 I’m Doing Well, but Now What?

Once you’ve got a good grasps on the words and general sentence structure, the best thing you can do for yourself, if you ever intend to be conversationally fluent, is to start talking to other people in the language you are learning. This can be quite tricky, especially if you are thousands of kilometres away from the native home of the language you are learning, as finding native language speakers in a foreign country can be extremely difficult.

Step in the third and final app that I use – HelloTalk. In terms of actually learning the language, this is not the place to be. However, if you’re already feeling confident to start having some minor conversations with other people, HelloTalk is definitely your friend. HelloTalk is designed to bring together like minded people. For me, as an example of someone learning Brazilian Portuguese, I went onto the app and created my profile, saying I was willing to help people with English if they returned the favour for my Portuguese. 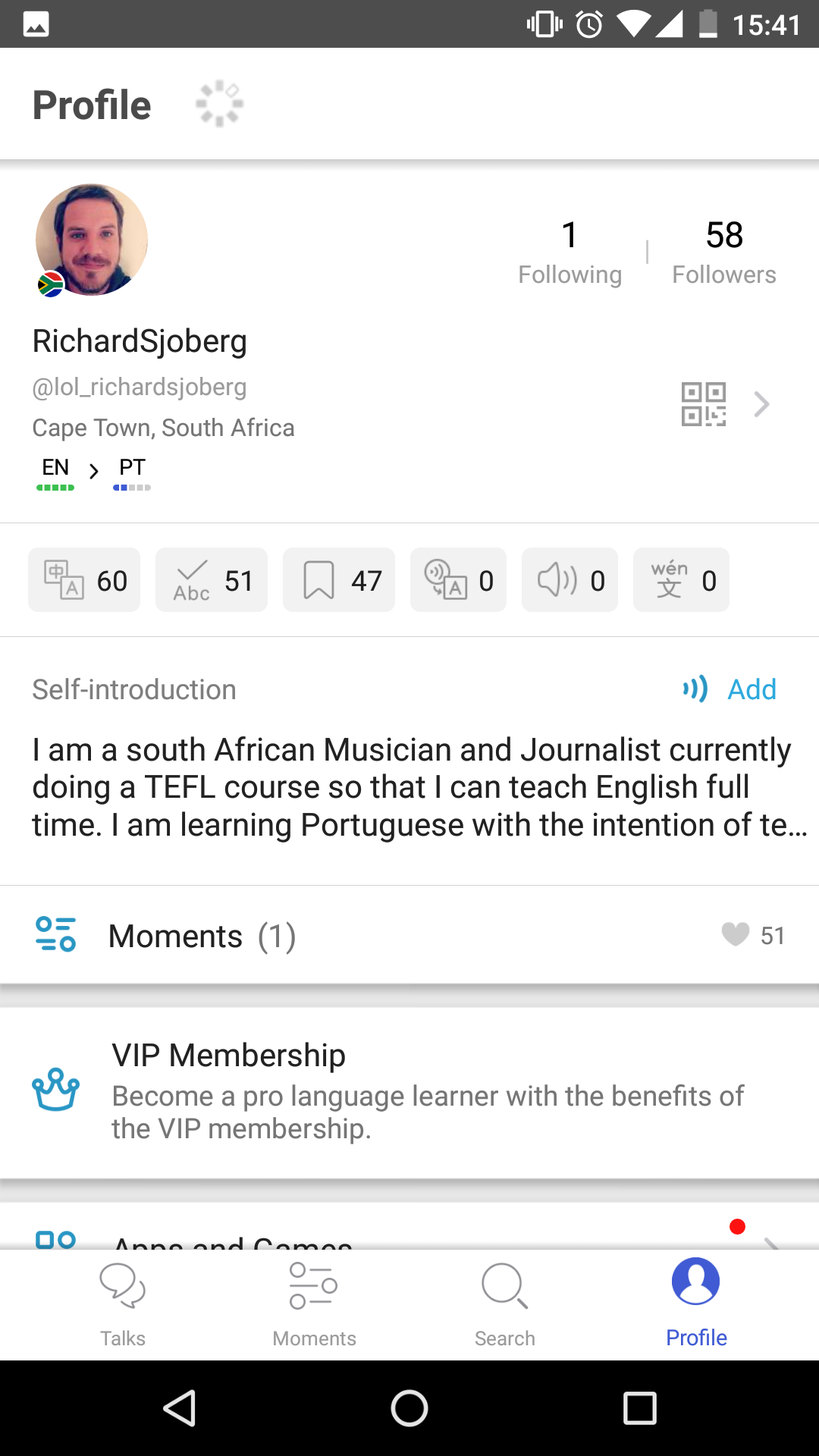 Needless to say I got absolutely flooded with messages, receiving over 90 different Brazilians of all ages and colours that were keen to converse and help each other reach their goals. Conversing with random people may seem a bit strange, but after the initial shock, it can be very interesting and fun to learn about new cultures and be able to show people the majestic cultural diversity that is South Africa and connect with people from around the globe that share a common goal.

Like WhatsApp you are able to send voice notes to each other on HelloTalk, meaning that you can actually practice your conversation skills with a native language speaker, which helps incredibly when it comes to getting a hang of accents and how they pronounce certain words. 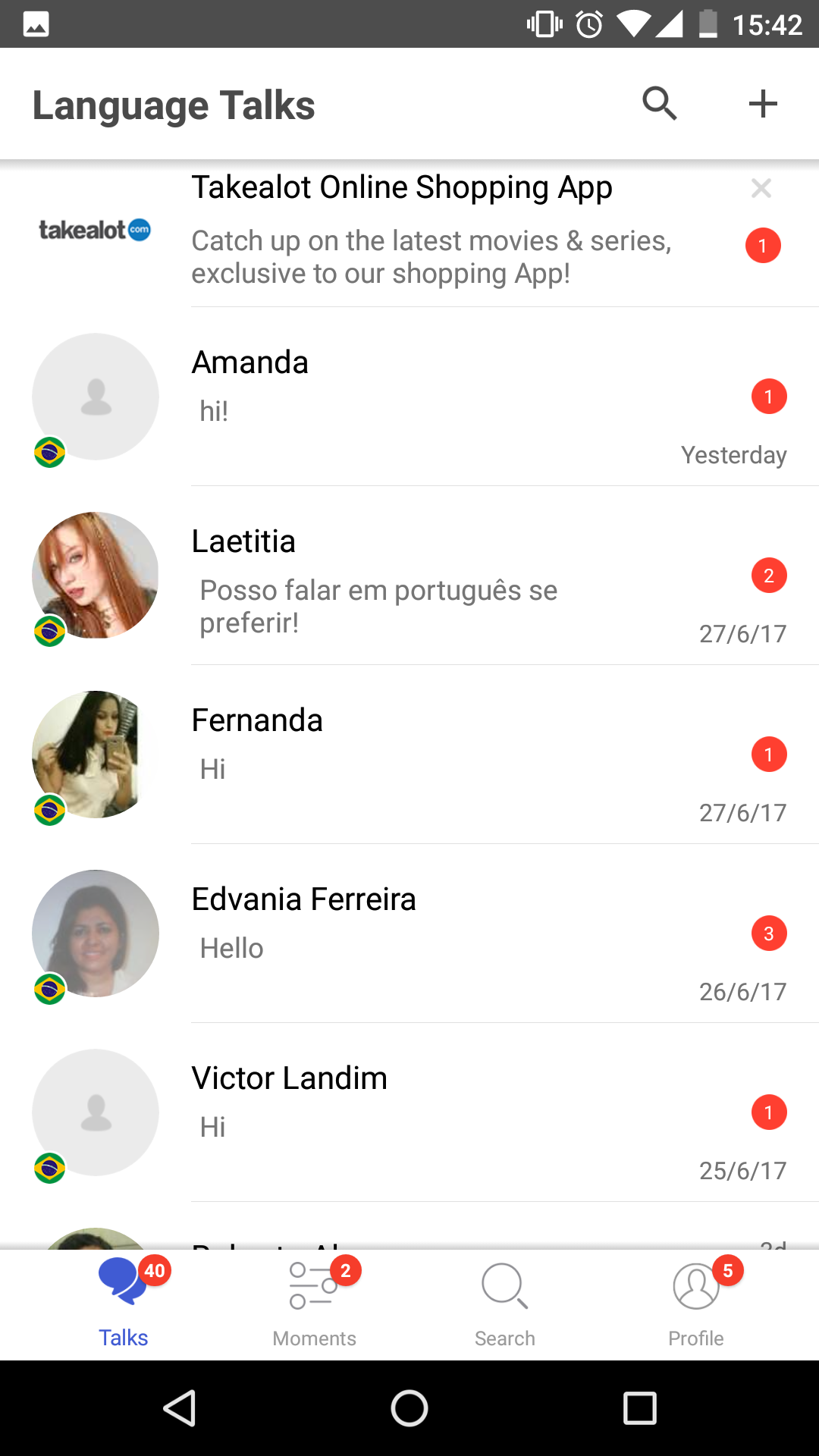 These three apps, when worked in tandem, will steer you straight on the path towards success, and thanks to all of them being free, won’t cost you a dime. Learning a new language has multiple benefits, and thanks to the wonders of technology, is easier than ever to do without breaking the bank.

From a personal level, learning Portuguese for these four months or so this year has helped me connect to new people, experience new things and even found some people that have become important to me, so I can safely say that it was a decision I will never regret.

The only thing stopping yourself is you, so get out there and be the best cunning linguist you can be. 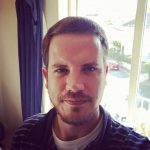 Richard Sjoberg has been a computer gamer all his life. He expanded into the world of gaming journalism and reviews with Telkom Gaming for four years back in 2013. Now, as a freelance journalist and musician, he has become known as the “Swiss Army Knife of South African eSports”, and has done all he can to better local esports – from hosting, casting or just general support, Richard is never too far from where the action is happening.

Find him on social: 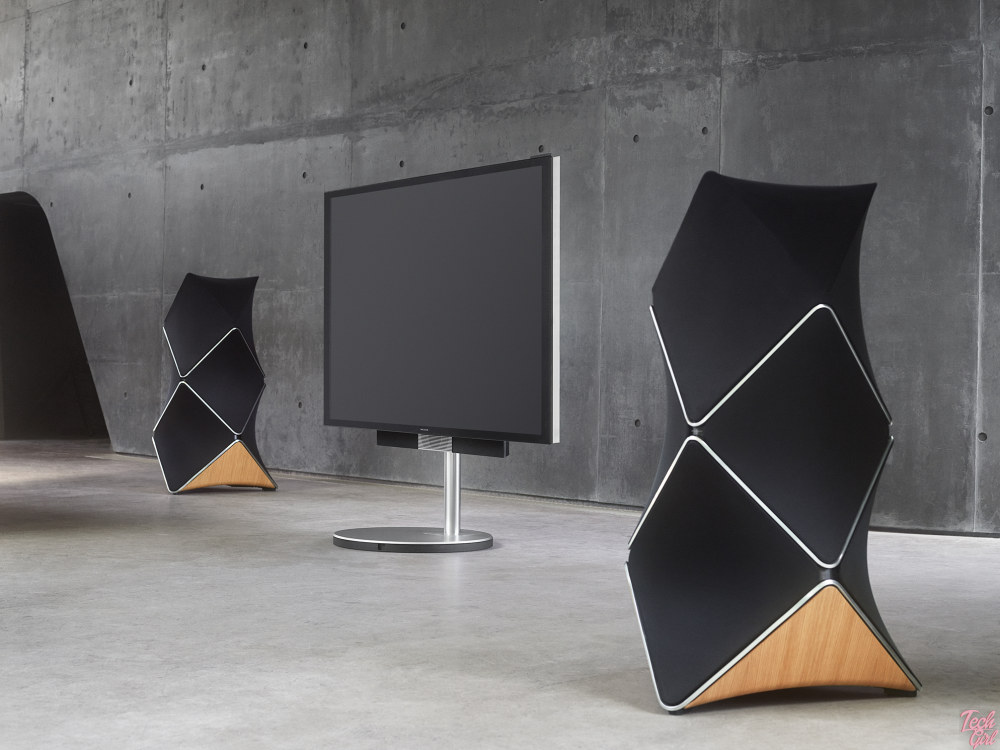 But seriously, would you spend R1.3 million on a set of speakers?