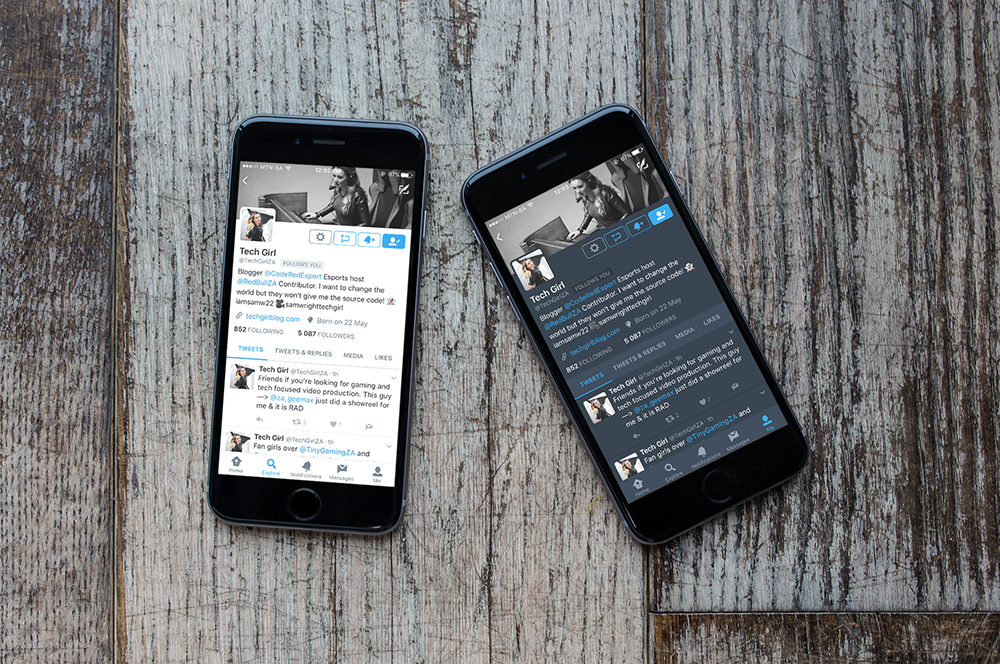 Dark VS Light… Which Side Of Twitter Are You On?

People have been arguing about stuff and taking sides for years. Coke vs Pepsi. Xbox vs Playstation. Instagram Stories vs Snapchat… I think you get the point?

But now, we are faced with a new type of argument, with new sides to be chosen….
I’ve witnessed it tear friendships apart (not really), destroy long-term relationships (okay Chani you’re being over-dramatic), and it has even made posting a simple screenshot online an argument waiting to happen (this part is actually true).

What is this argument you wonder? What sides are being chosen now?

(Yes, I’m serious. This is really a thing)

Now, for those of you who don’t do the whole twitter thing, the Twitter app allows you to choose between these two modes.
“Light Twitter” which is the traditional white background with black text and blue links. “Dark Twitter” (which is actually called “night mode” but dark vs light just sounded way more dramatic) is essentially the reverse, with a dark blue/navy background, white text and blue links… The aim of night mode is to make it easier to scroll through your the feed and read tweets in environments with less light.

Now you must be wondering why this is such a big deal that I’m writing an opinion piece on it.

A few weeks ago I was scrolling through my Twitter feed and came across a funny interaction between two accounts. I took a  screenshot and tweeted it out. Sound pretty harmless right? Wrong. My followers weren’t worried about the content shared in the screenshot, but rather about the fact that I wasn’t using night mode. 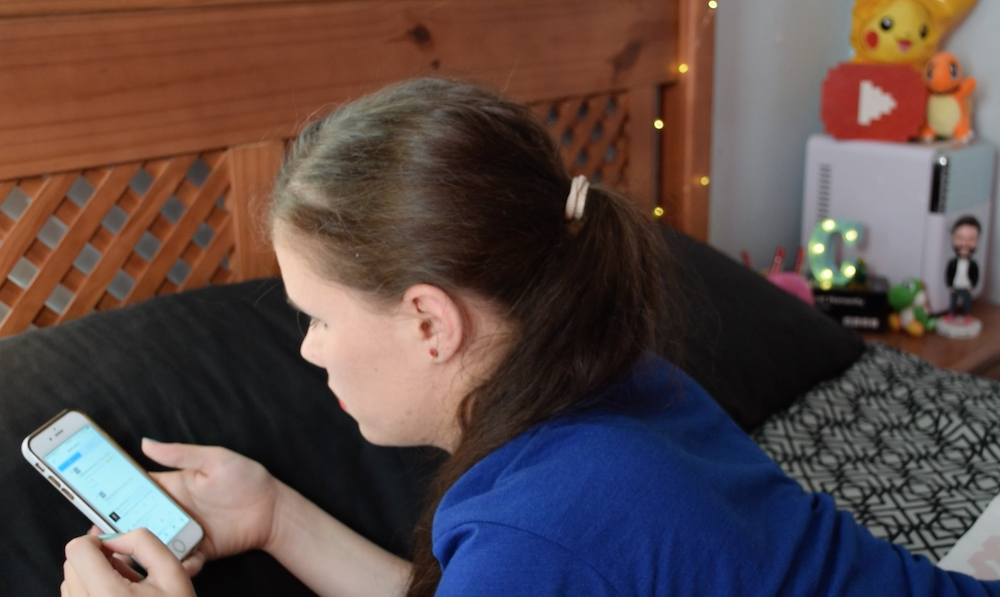 I received so many comments from followers giving me flack for not using night mode, that I decided to investigate a little further and ran a poll (as one does on Twitter to settle things). 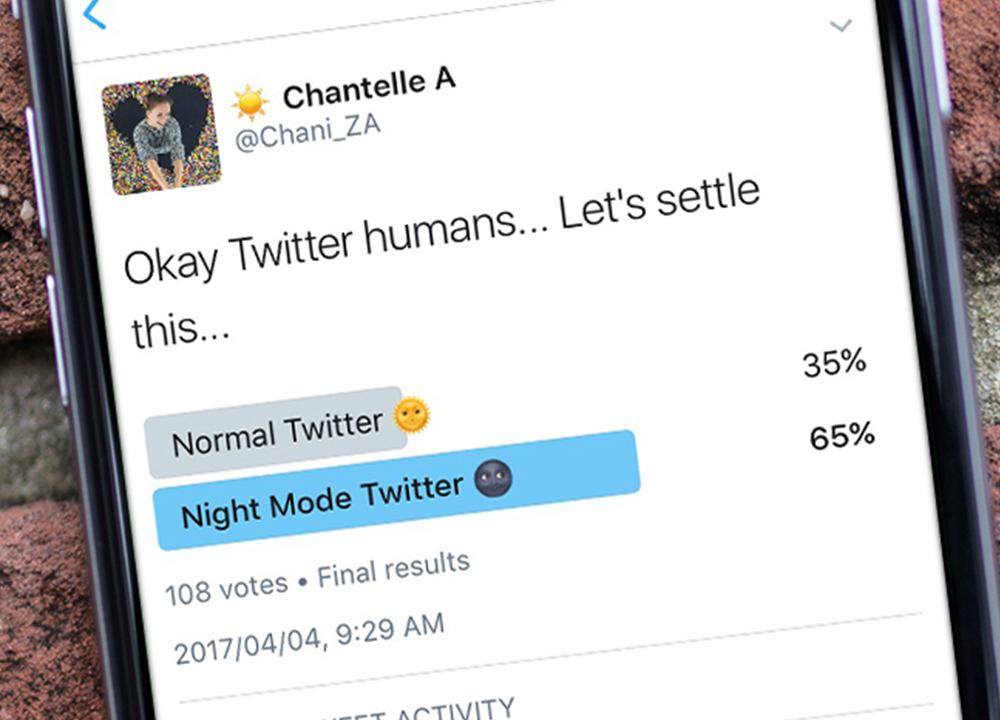 Now out of the 108 people that voted, 65% chose night mode. Being me, I still needed to investigate further and decided to try out night mode for myself. This didn’t last very long and I ended up switching back to “normal” Twitter the following morning.

Through this little experiment I came to the following conclusions; 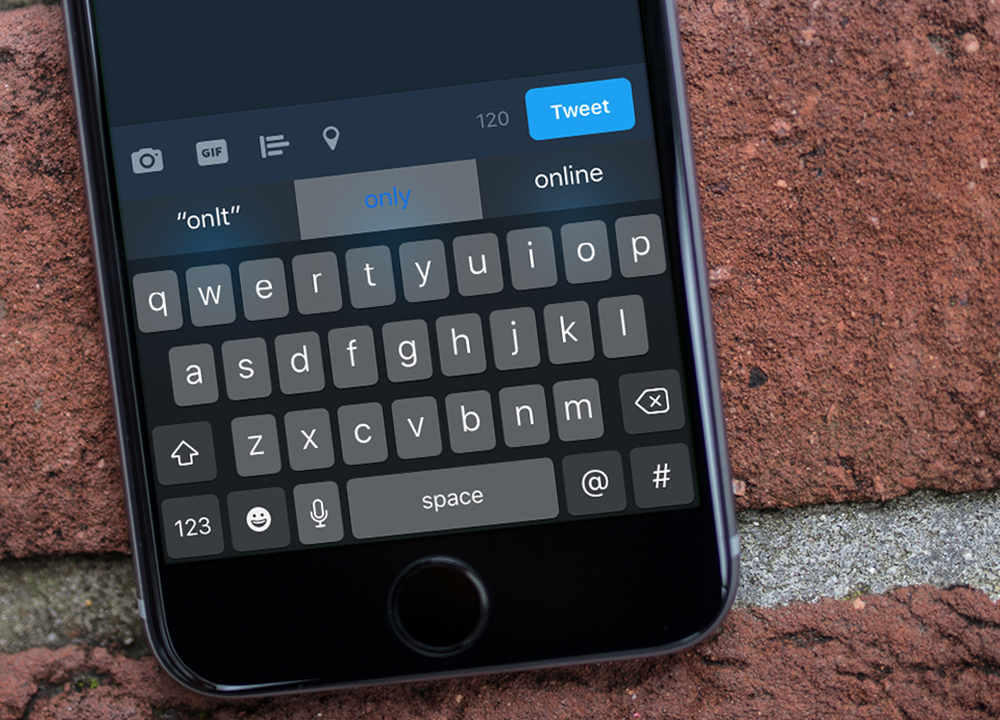 However, even after trying all of that for myself, I still wanted to know why people prefer the one over the other so I took to Twitter (again) with the following tweet: 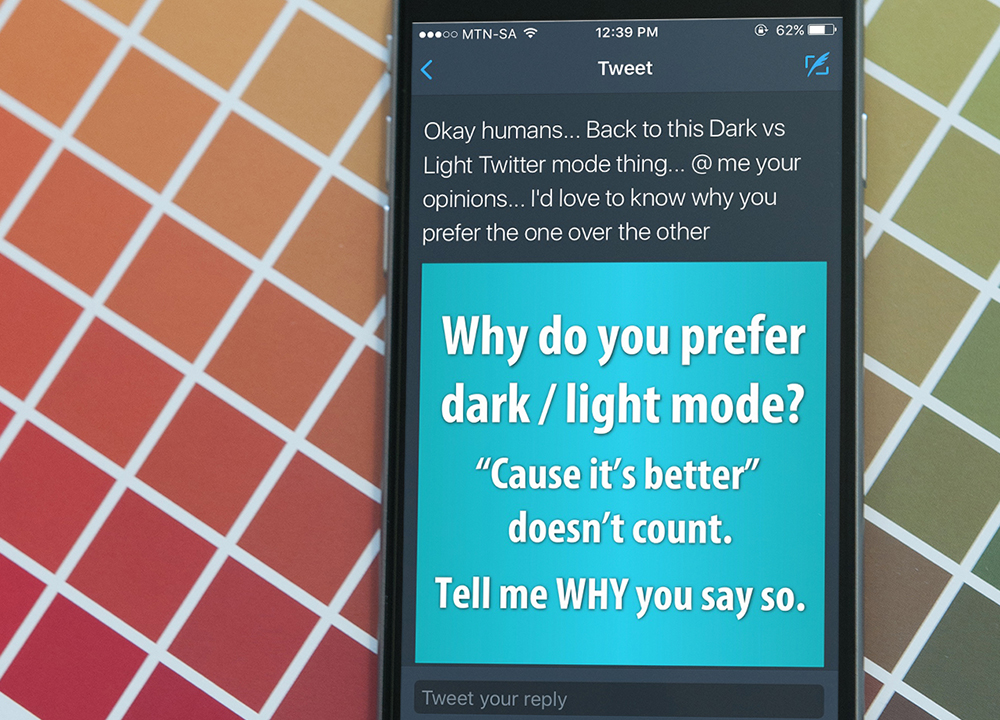 And I ended up with quite a mixed response ranging from people purely using night mode as a battery saver (I don’t get this as I had to turn my screen brightness up just to see the tweets which kind of defeats the point in my opinion), to night mode being much easier on the eyes (I agree with this for low light, but not during the day) and finally, others saying they much prefer “classic” twitter since it’s what they’re used to.

So here I sit feeling like the only nana in the world who uses “Light Twitter” during the day and “Dark Twitter” once the sun goes down.