Is this the scariest movie ever? Probably

Bytesized is your weekly dose of  happenings on the interwebs. This week I look into how the internet reacted to United Airlines (it’s glorious), talk about terms and conditions (it’s funny, I promise) and the scary AF movie we all need to watch.

Unless you’re flying first class (I’ve never flown first class) air travel can be less than comfortable. First United Airlines wouldn’t let someone wearing leggings board the flight and then they took it to the next level when they forcibly removed a passenger who wouldn’t give up his seat.

And while this is terrible, in true form the internet didn’t disappoint. “Hold my beer” could really be the hallmark of 2017 and it never gets old.

United: no airline will ever do worse than not allowing girls to wear leggings

At the #United Airlines check-in, the agent asked, "Window seat or aisle?".
I replied, "Or you'll what?"

That's when the fight started.

United is safe to fly as long as 1) you're not a 10 yr old girl wearing leggings or 2) you're not a paying customer with a legit ticket.

Probably the scariest movie ever

I avoid scary movies. Ever since Blair Witch Project, scary movies became way too much for me. Especially when there are children, dolls or clowns involved. I have no idea why I decided to watch the IT trailer, but I did. And luckily it was in the day time.

I really want to watch this even though I know that every time I close my eyes, I’m going to see Pennywise the clown.

One of my favourite episodes of South Park is when Kyle accepts the terms and conditions on his iPad without reading it. And in doing so, Kyle realizes that he has agreed to become part of the HumancentiPad. Well someone HAS actually read them and turned them into art. 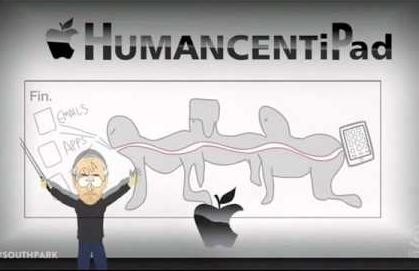 [Tweet “What do you call a bunny who was raised in a hotel? An inn-grown hare.”]

And I’ll leave it there.