We should all be feminists

Why are celebs like Natalie Portman wearing that T-shirt and what does it have to do with book club?

Before you skip to the next article, hear me out. Nigerian author of Americanah, Chimamanda Ngozi Adiche, wrote the book after her TEDx Talk of the same name. It aims to give us a definition of feminism that is inclusive and relevant.

Here’s why you should read (or watch..I won’t tell)

We should all be feminists 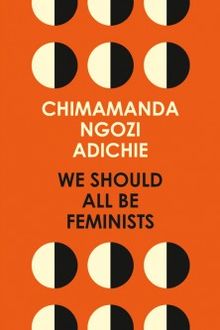 And no this isn’t a burn your bra hate all men message. It’s more about admitting that there is gender inequality in order to change the status quo. Adichie draws on her experiences as a woman in Nigeria and puts forward a case for why we should all be feminists.

SEE ALSO: Tools of Titans – get the secrets of top performers and apply them to your own life

The book covers a serious topic, but there are light-hearted and humorous parts.

The first female creative director at Dior in 70 years, Maria Grazia Chiuri designed a “We should all be feminists” T-shirt, which celebs like Natalie Portman and Riri rocked at the Women’s March after Trump’s inauguration.

Writing for the New Yorker, Adichie says it is time to talk about what we are really talking about. A plea to call a spade a spade. Let me get on my soapbox and say there is no such thing as an alternative fact. It’s a lie or incorrect. Post truth is propaganda. Don’t let any of these become the norm.

It’s about doing better. “My own definition of a feminist is a man or a woman who says, yes, there’s a problem with gender as it is today and we must fix it, we must do better. All of us, women and men, must do better.”

Beyonce featured a clip of the talk in Flawless

Watch the full TEDx Talk below

(and I won’t tell anyone if you add it to your Goodreads as read). But you should read/watch We should all be feminists because it will get you thinking and reevaluating what you have come to consider normal.