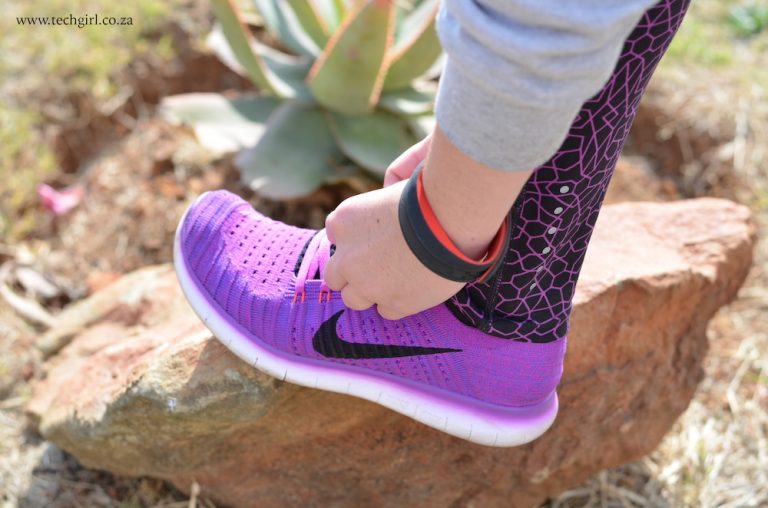 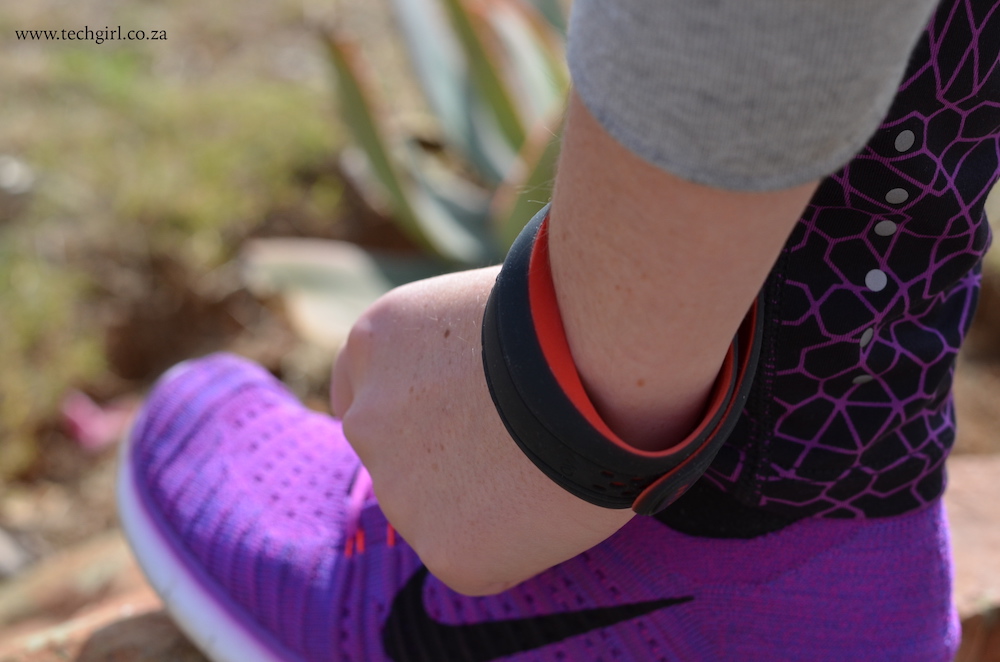 Out of the box the Mio Fuse is a chunky cuff for your wrist. I was sent the Mio Fuse Red (or Crimson according to the marketing documentation). Ideally the Crimson band is for larger wrist sizes. Unfortunately I have a tiny wrist so the device was rather chunky and loose when I fitted it. I rather liked the strap which has a typical watch type set up but is further secured via to press points. That means you have very little chance of it coming loose during a work out.

I had a Fitbit for a few months and I loved it more than words can say. During a move to my new flat it somehow got lost in the boxes and I’ve still been unable to locate it, something that depresses me each day. I found the Fitbit great for tracking my day to day activity and upping my usual steps to try increase my movement. I also liked the way the Fitbit counted the stairs I’d gone up. It became a reminder to skip the elevator where I could.

Following off the Fitbit I tried out the Apple Watch which I loved more than words can accurately express. 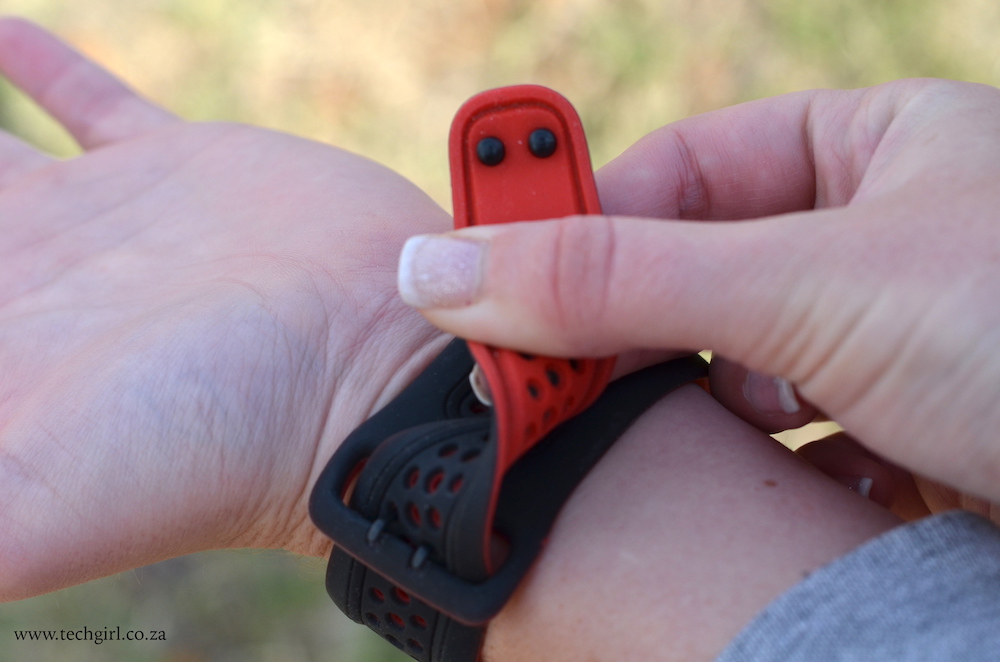 The Apple Watch was ideal for someone who isn’t a complete fitness junky but is really just looking for a way to up their anti and improve on how much time they spend moving. It is the perfect fitness companion for the super active or the not so super active (like me). Add in to the mix all the other features, it becomes a great must have wearable.

The Mio Fuse is not for the casual fitness fan. 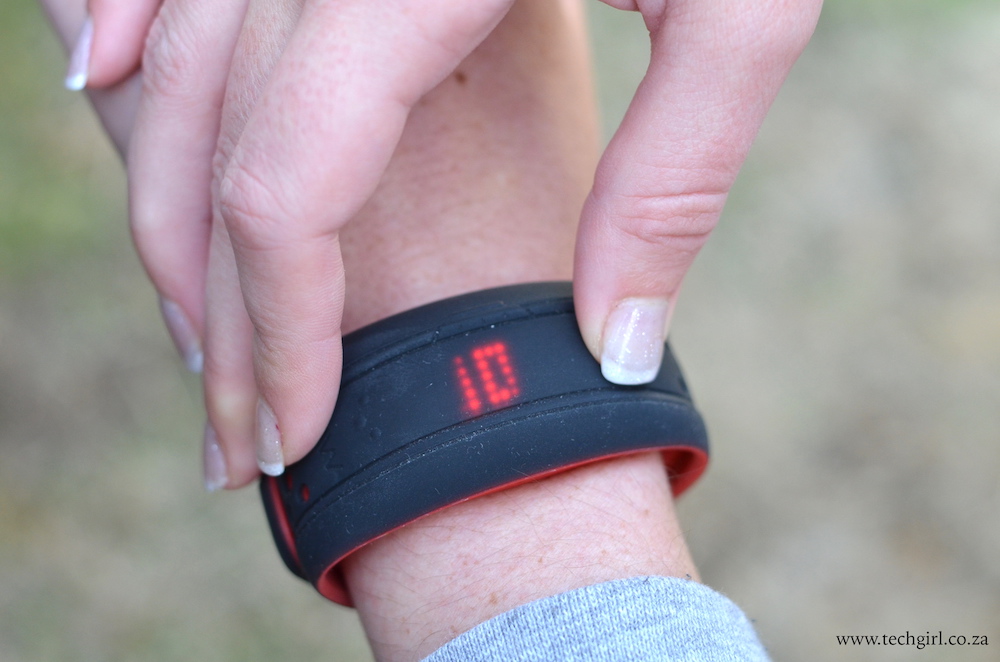 The Mio Fuse is designed for serious athletes. Think cyclists prepping for insane challenges or runners aiming for the comrades. It’s the wearable for the iron woman and not the marshmallow girl trying to tone up. It’s a great fitness device with a host of features. It tracks your steps, your calories burnt and, more importantly, provides data on your pace and distance travelled.

It also has an additional Mio Optical Heart Rate monitor which is rather fancy. On starting a workout you activate your smartphone Mio app that then kickstarts the heart rate monitor. As you work out the band flashes various LED colours to indicate your heart rate level. For serious long distance athletes this is great as they don’t need to stop working to check their heart rate. The light flashes and optional vibrations give you touch and sight indications as you go.

It is something my athlete friends love. 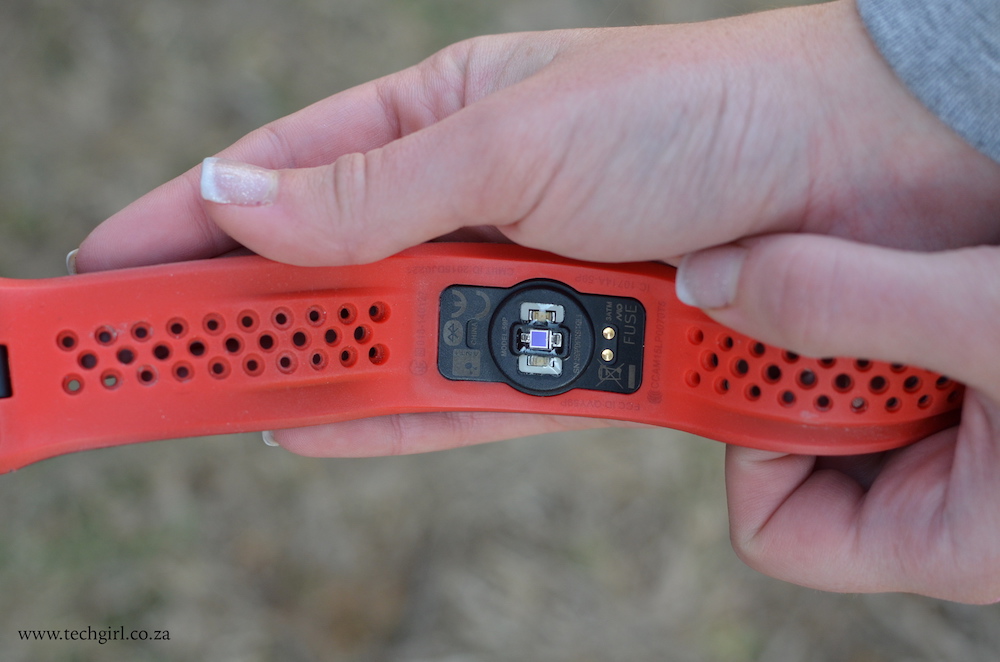 However, I’m not a serious athlete. I’ve only recently started running and do a lot of it on a treadmill because I’m alone. I haven’t even factored in heart rate in to my workouts yet. I focus on just running for the time I need to and trying to increase my distance each time.

My experience with the Mio Fuse was less than fantastic. For starters it arrives with very little written instruction out the box. You basically get a little pamphlet indicating that you should download the Mio GO app. So I did. The app prompted me to add some details about myself, claimed it had paired to the device and that was it. However, every time I tried to start a work out (by pressing the start a work out button on the app) it would tell me the device wasn’t synced. But my profile reflected it was synced. I spent three days at gym with no tracking data because I just couldn’t get the device to work. Finally, one day, it just started (so odd). 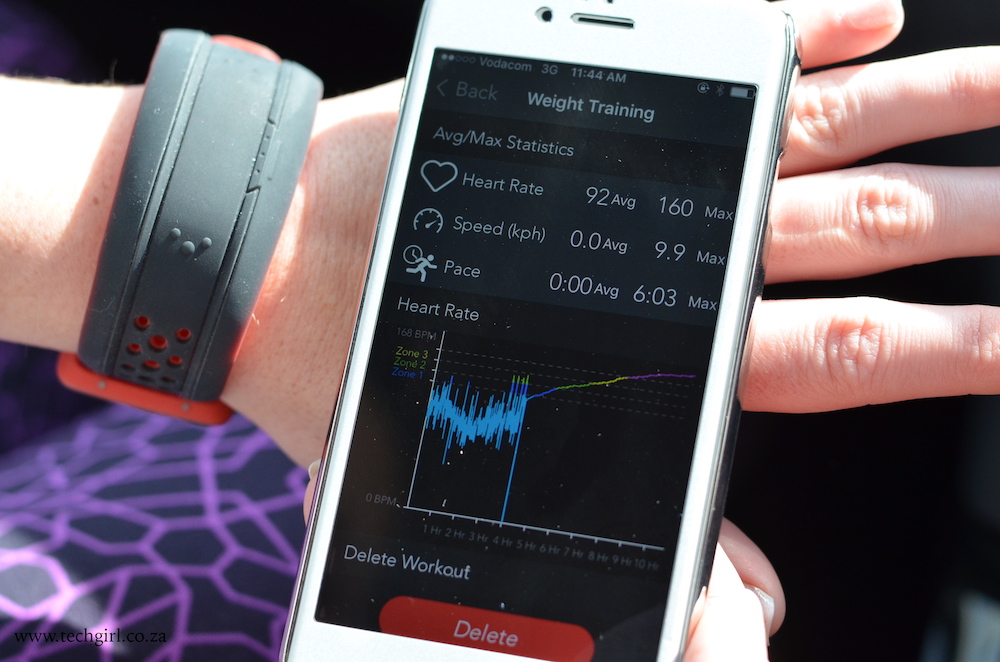 There are a host of customisable features in app for the device but they’re hard to navigate at the get go. If you’ve never used a fitness tracker you’re likely going to be rather confused. You’ll need to have a decent understanding of wearables and, specifically, fitness wearables, to determine the customisable features and what you want for your specific needs.

I found the heart rate monitor struggled to track my heart rate and indicate changes. It was somewhat buggy and I think that had more to do with the cuff being loose. A smaller Mio Fuse may have supplied more accurate results. The display on the device gives you time, steps and the usuals but very little other information is supplied. You need to go in app for that. There are also no buttons on the Mio Fuse but rather raised dots to press. 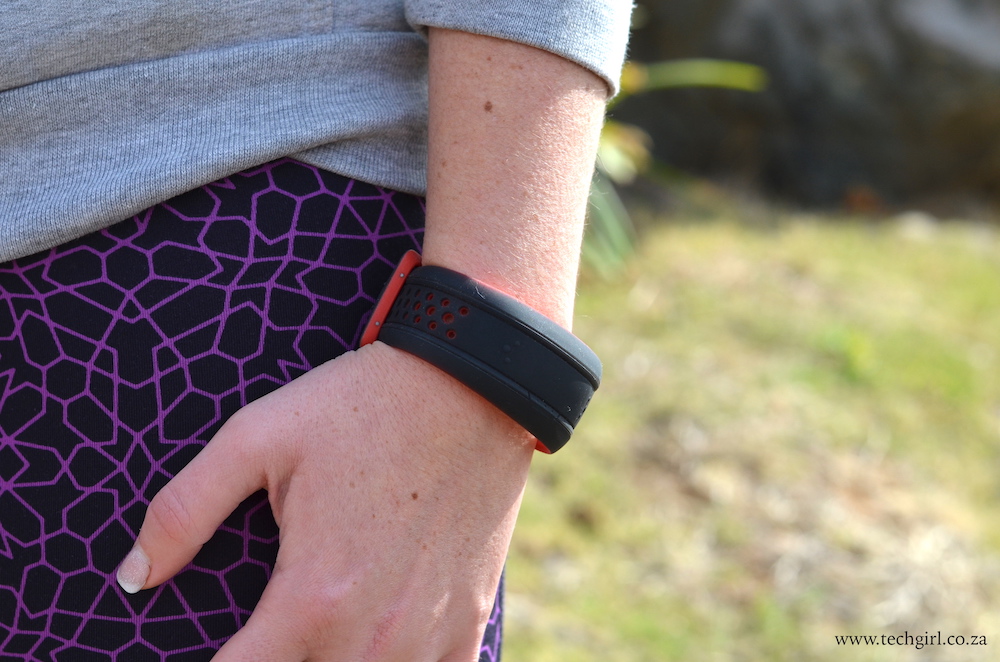 For the most part it tracked my workouts just fine and as a daily tracker gave me insight in to the amount of steps I take in a day. For a serious athlete the tracking capabilities and heart rate monitor are going to be extremely attractive. The rubber design means you can bash it around and it is also water resistant which is ideal.

However if, like me, you’re not prepping for the comrades and really just want to track your day to day movements, sleep patterns and generally just improve your health – this is not the fitness band for you. It does most of that stuff (except sleep patterns – it doesn’t track sleep or stairs) but it isn’t really made for the casual exerciser. For starters, it is a big and chunky so it doesnt seamlessly transition from gym to work. It stands out like a sore thumb. It also has features developed for work outs so after your gym session don’t be surprised if you’re replacing it with a better looking watch.

It’s not a bad device but it is definitely not MY device. I imagine the 5am runners are going to go mad for this one. I’m just reminded about how much I miss my Fitbit. 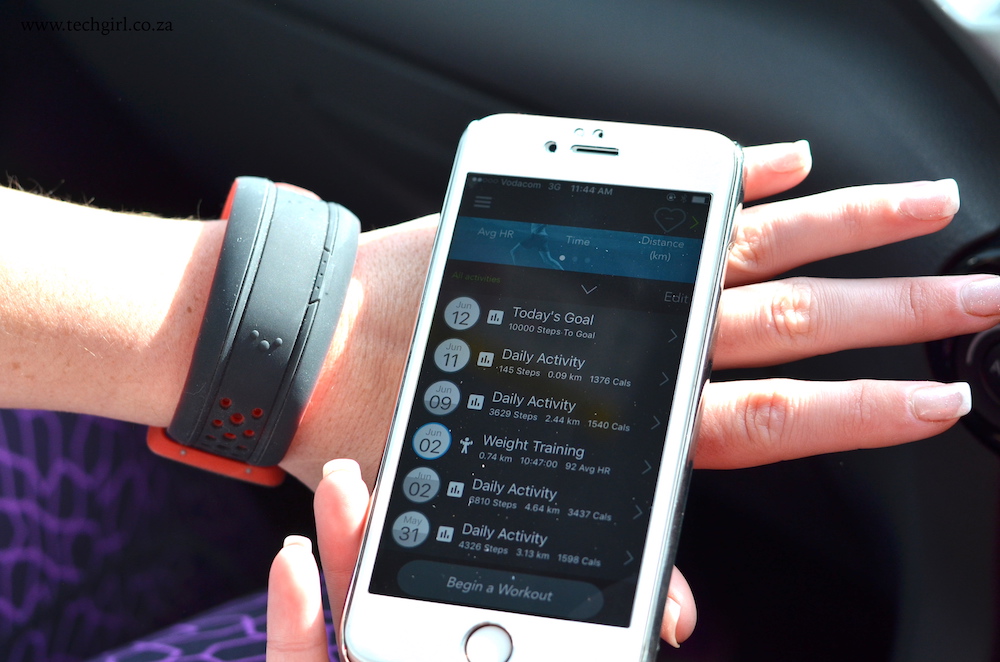 The Mio Fuse offers in detail analysis and data about your work outs.

It’s not really much more than a step counter for the more casual fitness fan.

Disclaimer: I was given a Mio Fuse to keep.