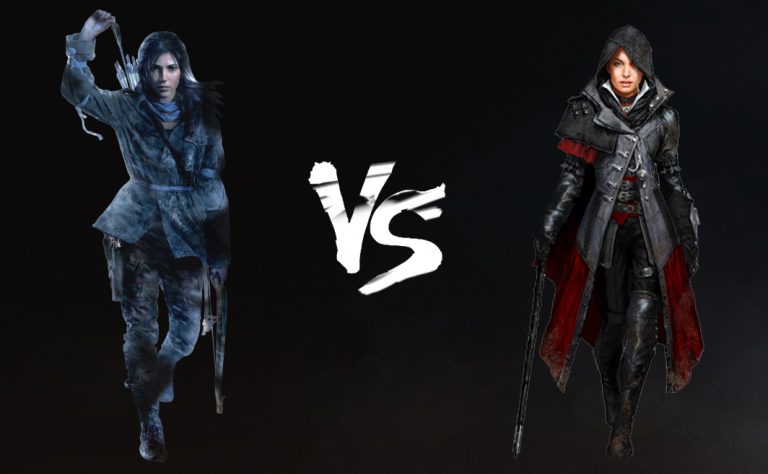 Lara Croft Vs Evie Frye: The Ultimate Heroine Show Down

Two substantial female led video games are releasing over the next few weeks. Assassin’s Creed Syndicate – led by Evie Frye (there is her twin Jacob, but we don’t care about him) which is already out on the market, and then there is the upcoming Rise of the Tomb Raider, which really needs no introduction. Both of these games are led by extremely powerful woman in gaming, and even though Evie is new to the scene, she is the best thing to ever happen to the Assassin’s Creed series since 2007.

But with such strong personalities, who would win in a proper showdown between the two of these woman? We have Lara on one hand who has been reborn in survival form with her ruthless stealth abilities, and Evie who preys on unexpected victims from the rooftop above, waiting to pounce like a Gazelle, but more lethal-like. Who would win if we had to put them in a room together? It is Lara Croft vs Evie Frye, let’s see how they match up in a Pokemon show down (yes, Marco decided to combine ALL THE GAMES)! 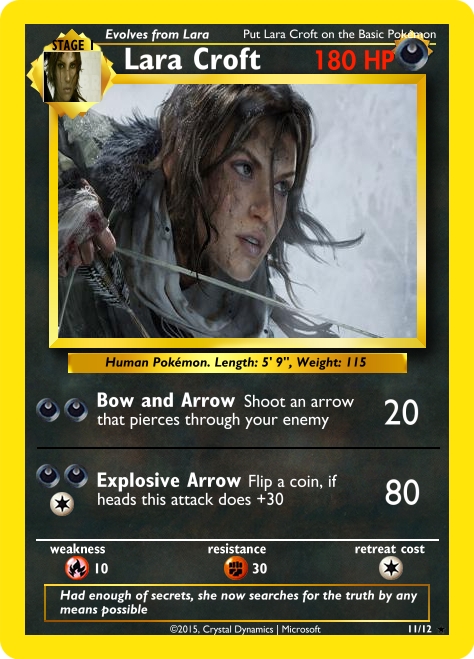 Lara Croft has come a long way in her struggles. After the chaos of the Yamatai incident, she now searches for the truth behind both her past, and the ones she loves. In her latest adventure, she searches for the secret behind immortality. This takes her to new locations in a race against a well-funded organization that are after the same thing, Trinity. 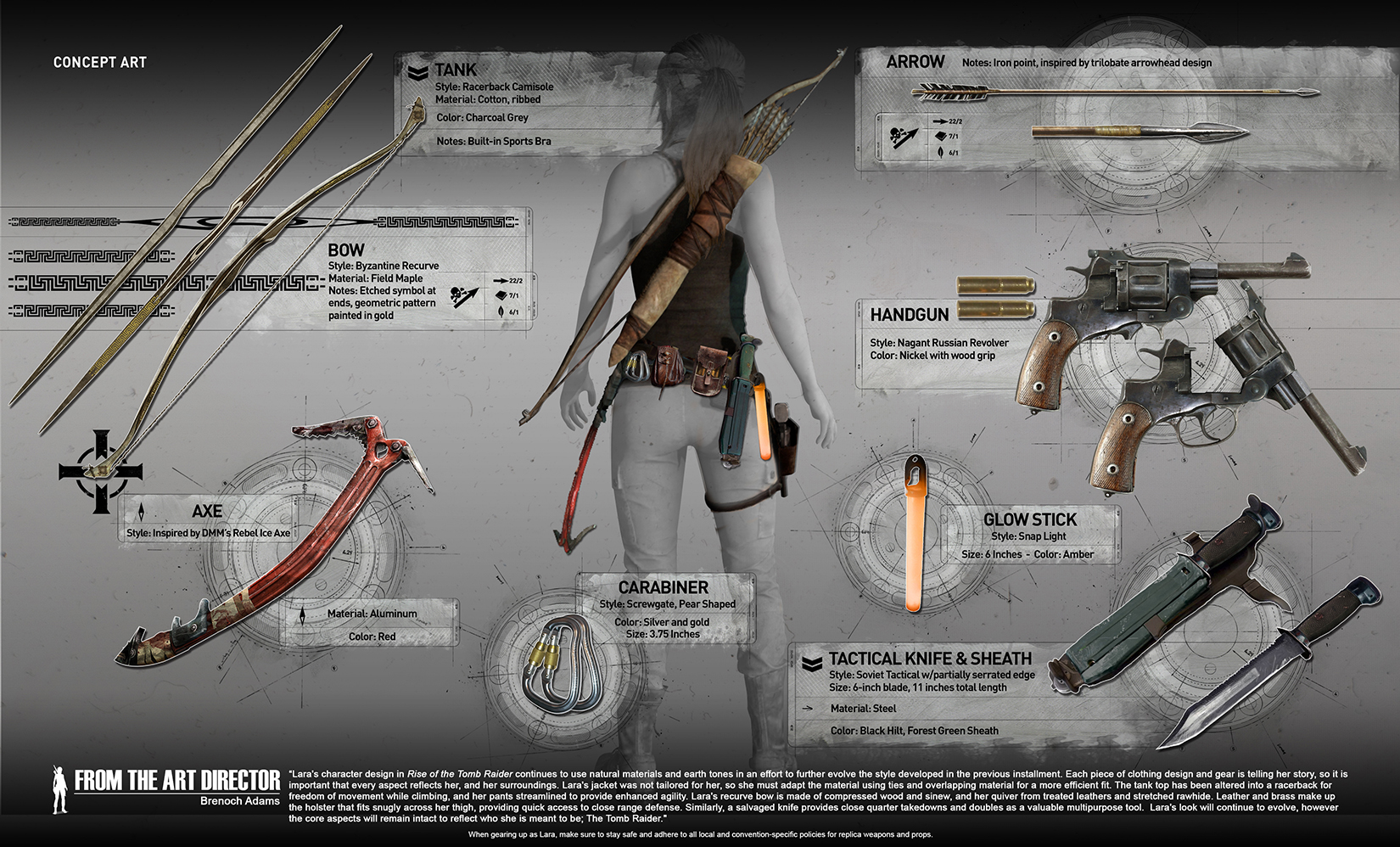 Lara is armed to the teeth with a bow and arrow that can be warped into a poison arrow, explosive arrow, and even a flameable one. She wields knives, handguns, an axe, and a glow stick for all those dark areas. But in the end Lara is all about tactical stealth. This is what makes her and Ms. Evie Frye one in the same. Both of them want the same thing, an ancient artifact that wields extraordinary power, and both of these woman are confronted with an organization that want the same thing. In Lara’s case this is Trinity, and in Ms. Frye’s situation, it is the Templars. 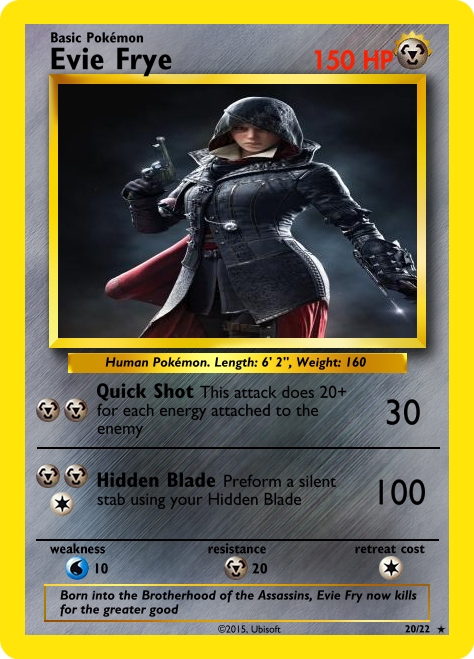 Evie Frye has two major problems in her life, the Templars have taken over the City of London and she needs to get them out of the way so she can find the Piece of Eden in peace, and her twin brother is a complete hot head that always interferes with her plans.

Evie takes the silent approach when it comes to any situation, sure she can pack a punch with her brass knuckles, but when the situation requires a more silent approach, she is your girl. Evie relies heavily on her hidden blade, as do all assassins. She is a master at tossing throwing knives from a distance and most of the time she always gets one stuck in someone’s forehead, instantly killing her opponent. She also has wit, being able to manage any situation with great understanding and responsibility. If you ask me, she got all the brains between the twins.

Now that is a tough question, if Lara had to talk whack about Evie’s bestie, who would win when the confrontation phase began? I say they would both spend an hour or two hiding away from each other, waiting for one of them to make an appearance so the other can strike from the shadows. When this happens, we would expect to see quite a battle ensue as Evie would pull out her cane sword, and Lara would whip out her axe. After a couple of hours of constant blocking, ducking and diving, and a few curse words every now and then, I would say they both just gave up and decided that maybe Evie’s bestie was fantastic, and Lara admitted she was wrong. They’d walk off into the sunset and head to the local tavern to enjoy a glass of wino, which is wine if you don’t have the time to Google it.

Editor weigh’s in: how this actually ends is that, after a few glasses of wine, Evie stabs Lara in the bathroom and leaves her there to bleed out. We all know Assassins never lose… Marco didn’t want me to add this because he thought this was a bit vicious. He’s next on Evie’s hit list.