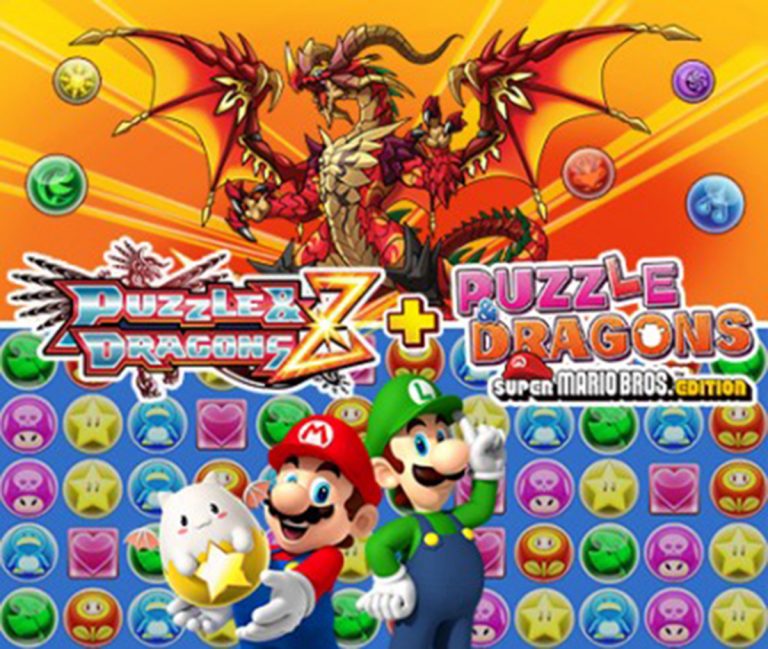 Gung Ho Online Entertainment have been known for their great work creating unique Pokémon inspired Dragon taming, puzzle games on mobile platforms like Android and iOS. The games revolve around you hatching creatures by collecting eggs you find while exploring dungeons and defeating enemies using orb-matching battles. These battles require you to match up orbs by moving them along a rack, swapping different colours and racking up combos to deal more damage.

Gung Ho have teamed up with Nintendo to bring this mobile genre to the Nintendo 3DS in two forms, a classic Puzzle and Dragons game, and a Super Mario Edition. But this comes with a few surprises as its in-app purchases are no longer available, making this one long grind to progress and train your creatures. 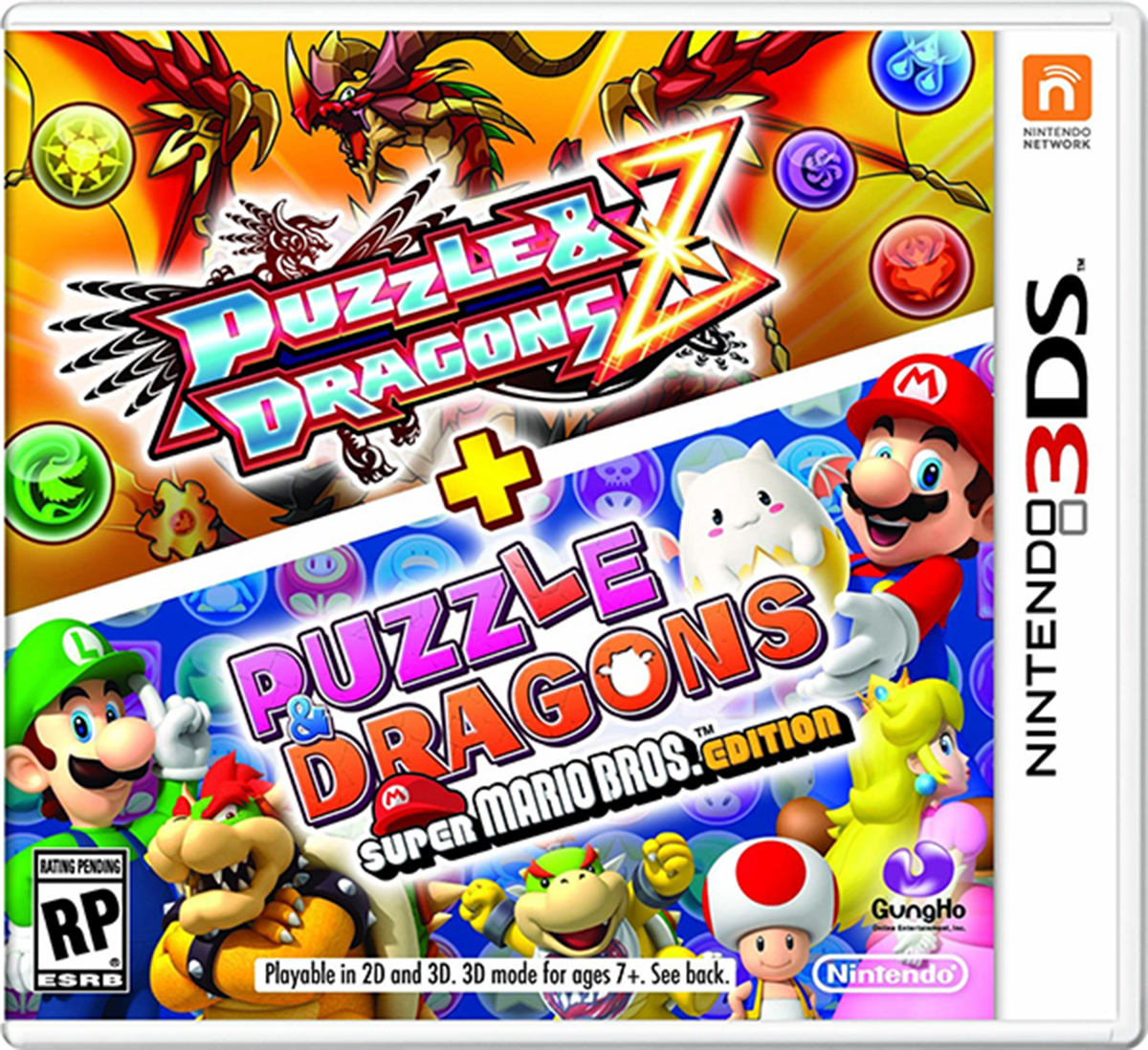 The game comes bundled with two titles, both focusing on the traditional orb swapping gameplay, and both of them revolve around the same concept: travel through a dungeon, match orbs, kill enemies and try to catch more creatures to put into your team. Do not get it twisted though, the Mario version is not just a skinned Puzzles and Dragon, it has everything we love from the Super Mario franchise and shines with personality.

The world has been torn asunder by the evil organization known as Paradox, pieces of the earth have been cut out of it in the shape of puzzle pieces and it is now your job to gather the World Pieces together and repair the world.

Starting out you are given three eggs to hatch, these give you three starter dragons, Water, Fire, and Wood. The game is set around five types of elements, Water, Wood, Fire, Light and Dark. With each of these elements having a weakness or resistance to the other. Water is weak to Wood, but strong against Fire, whereas Light and Dark are weak against each other and bare no resistance to any element. Knowing your weaknesses and strengths is how you approach each dungeon, as starting off the game each land is occupied by a certain element, only slightly mixing things up every now and then. 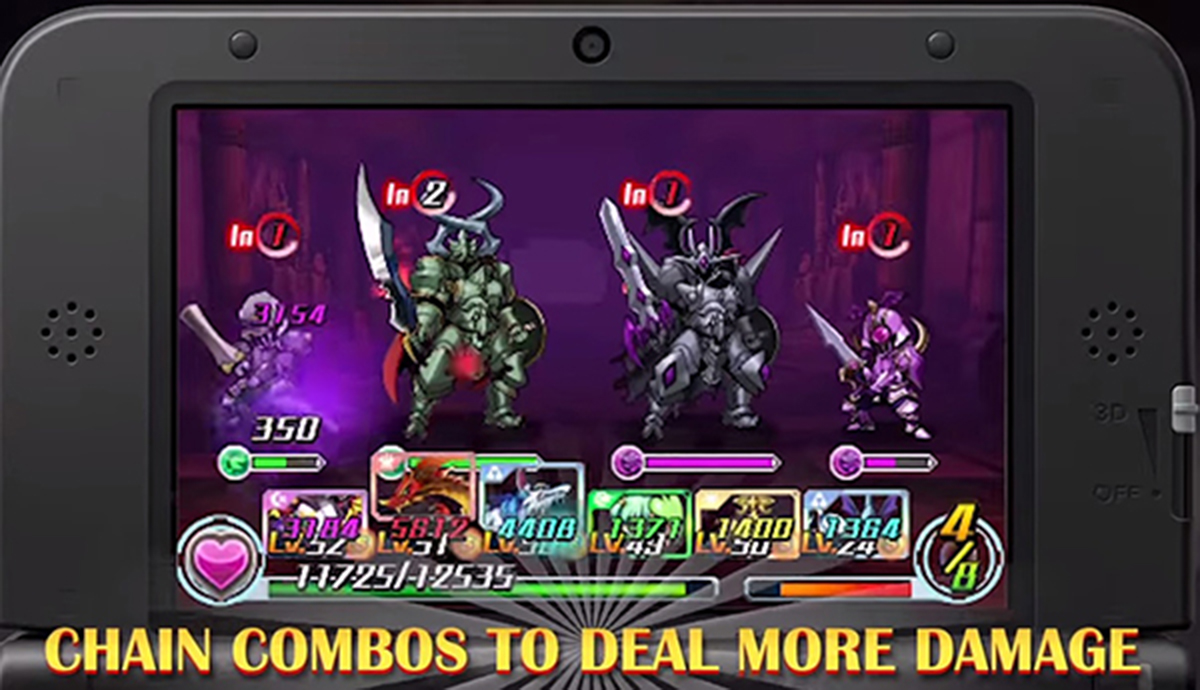 The battle system is mix up of Bejeweled and an RPG turn-based game. You win a battle by defeating enemies by matching up three or more orbs of a kind. It goes much deeper as to swapping an orb with another like Candy Crush. This time you can pick up an orb and move it along the board swapping other orbs as you move it to your destination. Matching up 3 or more of a kind will power up that specific team mate and inflict damage depending on how many orbs you matched. Orbs will fall from the top of the board as you clear them, these will fall into place and sometimes match more than 3 creating a chain effect that clears orbs in a combo. Whatever you clear by accident or on purpose all goes into your attack damage and the higher the amount cleared gets added to the combo you reach and deals massive damage.

It is tough to master at first as you will often feel like you are clearing one row at a time, which will get you nowhere. But slowly as you master the movement of the orbs and learn how to get more than one row cleared with one swap, you will become an orb clearing genius and predict your move before you even pick up an orb. There are times where the game gives you a hard slap in the face and has next to no possible matches. This means you need to spend a few turns matching some up while taking damage from enemies. It is frustrating especially when you are at a deep part in the dungeon or facing a Sky Dragon that will always be 10 times stronger than what you are used to. 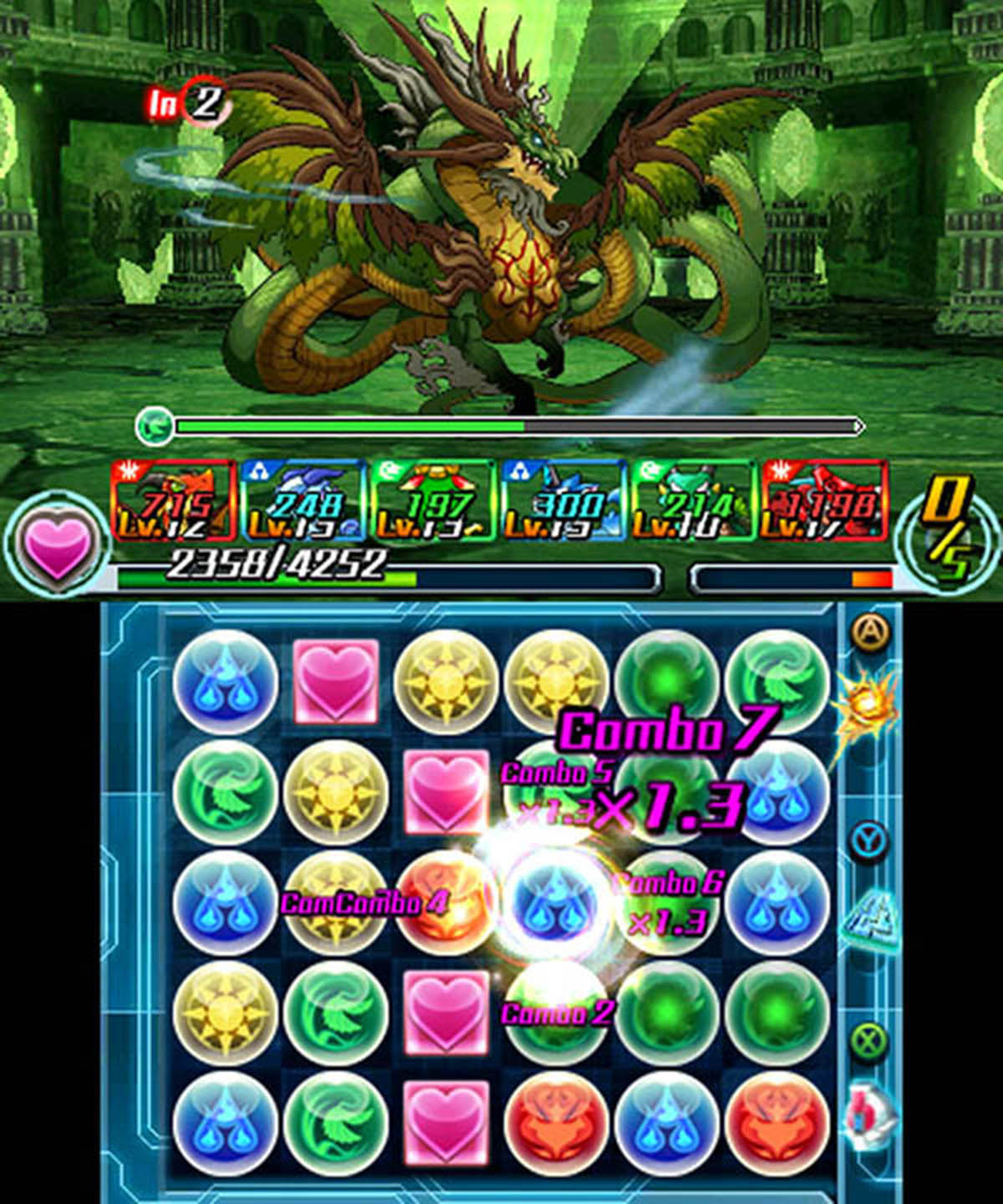 Dragons and creatures you obtain to help you out all have different abilities that really help you during battle. Some heal you (because when you reach a certain part of the game, the heart orbs just aren’t enough), some deal damage, some convert certain element orbs in other elements that favour that certain element. All these skills come in handy and once you master who can do what, you will find yourself going back into the skills to use then more often. Saying that, the enemies have skills of their own. Their skills do not require any skill points to use, unlike yours, and they too will turn the tide in battle to their advantage.

In order to restore a World Piece you need to go through an area divided into dungeons, which once completed unlocks a temple that houses a Sky Dragon. Defeating this dragon will restore a World Piece unlocking the next area, and so forth. Each dungeon looks great with 3D modelled environments and a pretty decent soundtrack backing each one. Once you have reached the last floor of each dungeon you will reach a boss battle, these battles are much harder than the battles you encounter while getting to the end of the dungeon and require skills and combos to succeed. 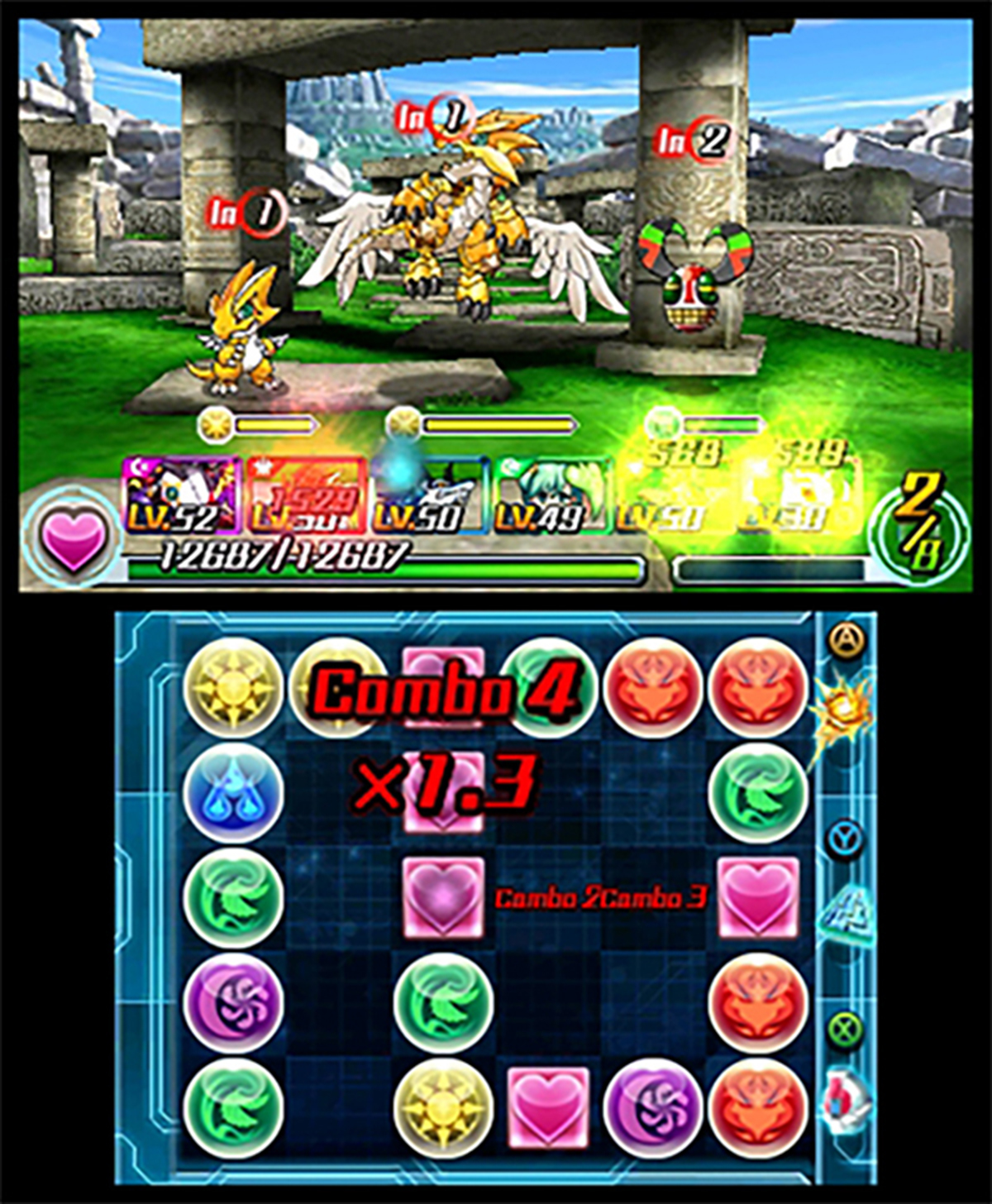 Along the way you will fight enemies, collect eggs they leave behind which will hatch into versions of them to use yourself, and puzzle pieces used to evolve your party. Enhancing a creature requires sacrifice, literally. You can sacrifice a creature that you aren’t using to power up another creature, and sometimes you will come across extremely rare dragons that grant a significant amount of XP when sacrificed.

Evolving creatures not only changes the look of them, but also increases stats. Certain dragons, especially the starter ones can go into different paths of evolution. These paths allow you to focus on a certain ability. The starter water dragon can either evolve into a healer of a defender, each looks different and will affect the outcome of the battle, so making the right decision is vital. Evolving takes time and resources that are not found often, this is where the grinding starts. You need a certain amount of puzzle pieces to evolve a creature, these are dropped from enemies that you defeat. The drop rates are low and that means you will be visiting that same old dungeon a couple of times before you get the required pieces. It is the only thing that really irritates the progression system. 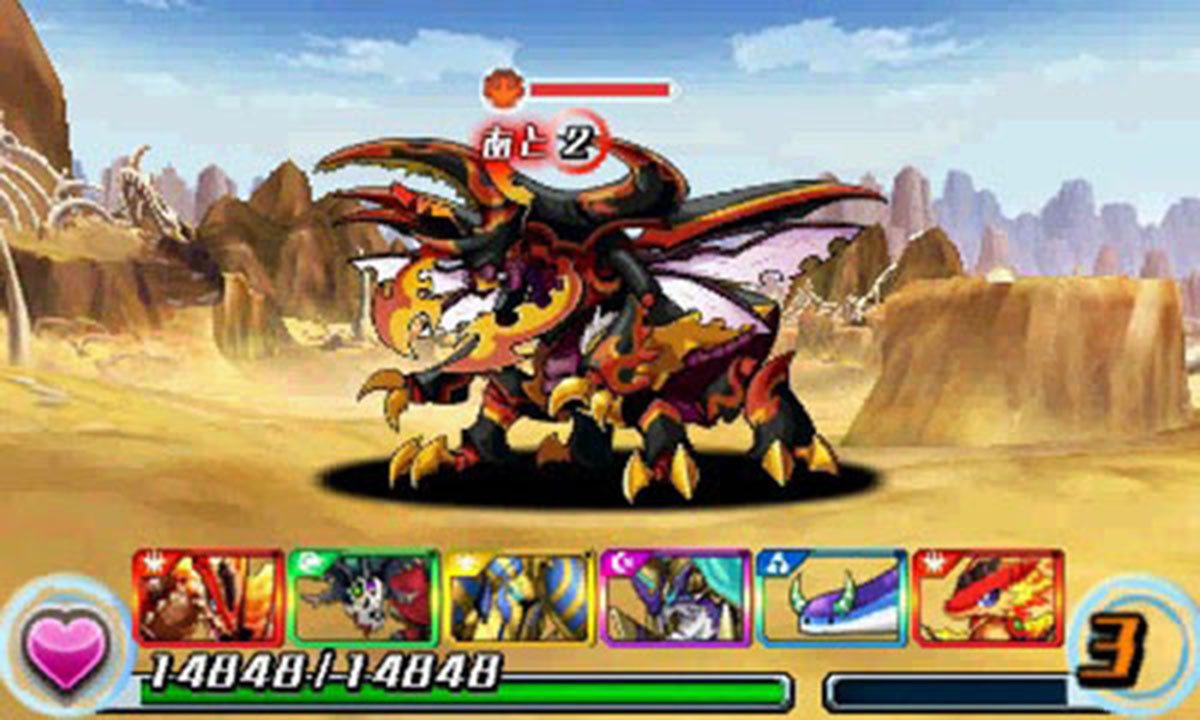 Puzzles and Dragons Z is a really good looking game, the dragons and creatures are spectacular, and at times you will just want to stare at a Sky Dragon to take in its fantastic design. The presentation is polished, and the sound track sounds like something that belongs in a Final Fantasy title. There are hundreds of dragons to discover, a pretty decent story line to get involved in, and a battle system that strays from the path of traditional RPGs.

Once you fall in love with Puzzle Dragons Z, you will instantly pick up the similarities in the Super Mario Bros. Edition. It is a great new take on the Mario franchise and it offers just about all the same qualities that Puzzle Dragons Z offers, if or even more polished and defined.

The elemental orbs have invaded the Mushroom Kingdom and Bowser has obviously taken advantage of this and has started using them against Mario and company in an effort to take over the kingdom. The story is like any Mario title before, Bowser bad, Mario good. It goes a little deeper than that, but I will not spoil it. 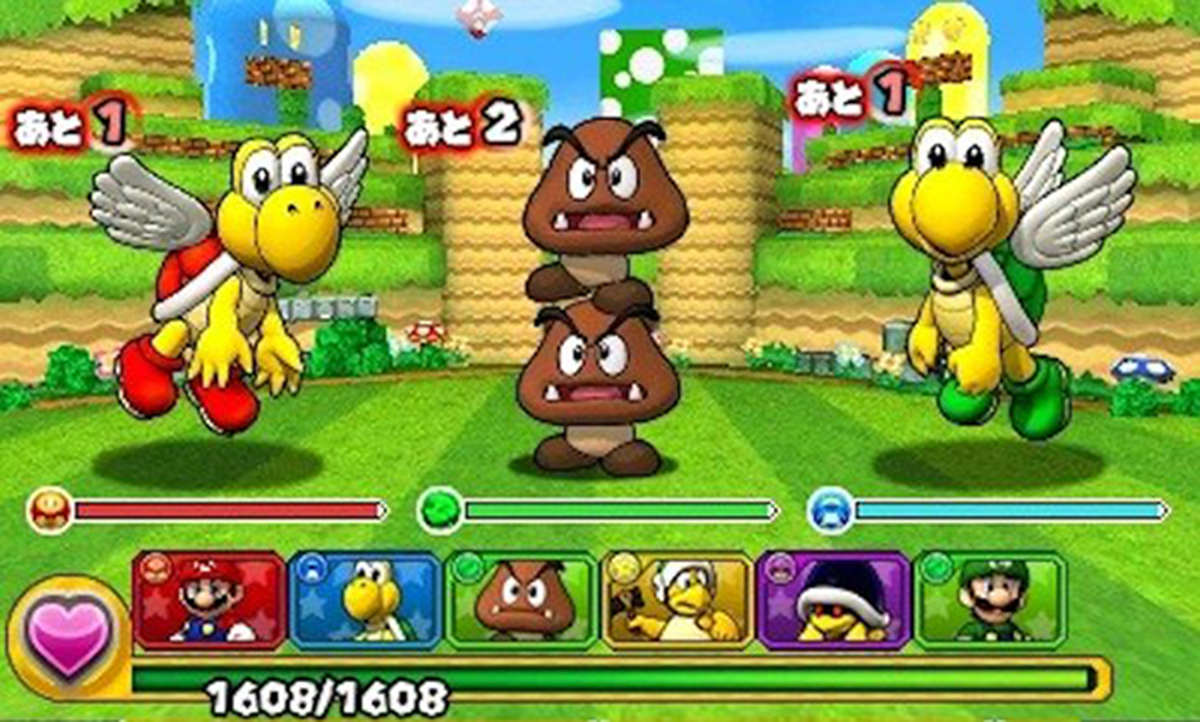 Instead of the side scrolling Mario that we know, you now enter dungeon-like levels that are home to iconic enemies from the Super Mario series. The game features the same Puzzle Dragons battle system where you swap orbs and match up elements to attack enemies, but with a Mario makeover. Enemies are rendered in a gorgeous 3D sprite that really brings out their personality, and the orbs are all Mario related items.

Just like Puzzle Dragons Z, the game sees you organizing a team to take with you into a dungeon. Divided into five elements, you organize your team to suit the dungeon you are about to enter. You will know what enemies house these dungeons and what to take with you beforehand. Matching up orbs and proceeding to the end of each dungeon will grant you a presence with the boss of the dungeon, beating him to move onto the next level. 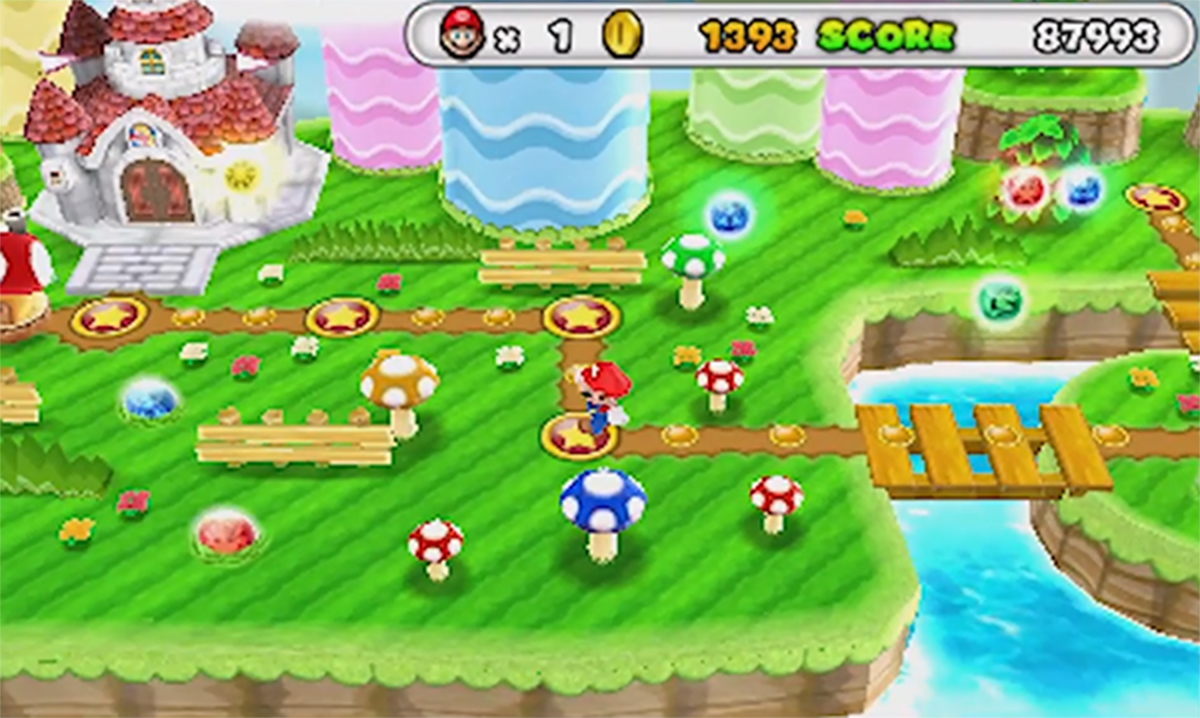 There really is not much else to say about the battle system compared to Puzzle Dragons Z, it is identical. Instead of dragons and creatures in your party you have different versions of Marios, like Ice Mario, Raccoon Mario, and Ice Luigi as leaders, and Goombas, Koopa Troopers, Toads, and Beetles as your team. Each team member has an element attached to it, the only major difference it that instead of dedicated elements, some team mates might have two elements assigned to them. Not only does this give you more variation when it comes to battles, but it also forces you to create more than one team set in case you need more fire than dark.

I was blown away at the sheer genius behind the overall presentation in everything. The music is so perfect in every Mario way, I was humming along to every stage as they not only resemble memorable levels in the series, but they also have remastered soundtracks. Evolving a character to the next stage might only have tiny visual upgrades like Goombas get wings, or Koopas a hammer, but you really cannot go anywhere with it if the character has existed before in a Mario game. That being said, the same tedious grinding is needed to gather the required materials to evolve as Puzzle Dragons Z. There is more than enough to keep you busy with this pack, it is two games in one, and even if you think that the whole puzzle RPG thing is not for you, Gung Ho have successfully merged Pokémon with Dragons, Mario with Pokémon, and puzzles with everything else. You will surely fall in love with at least one of them, and that love will carry over to the other one sooner than you think. 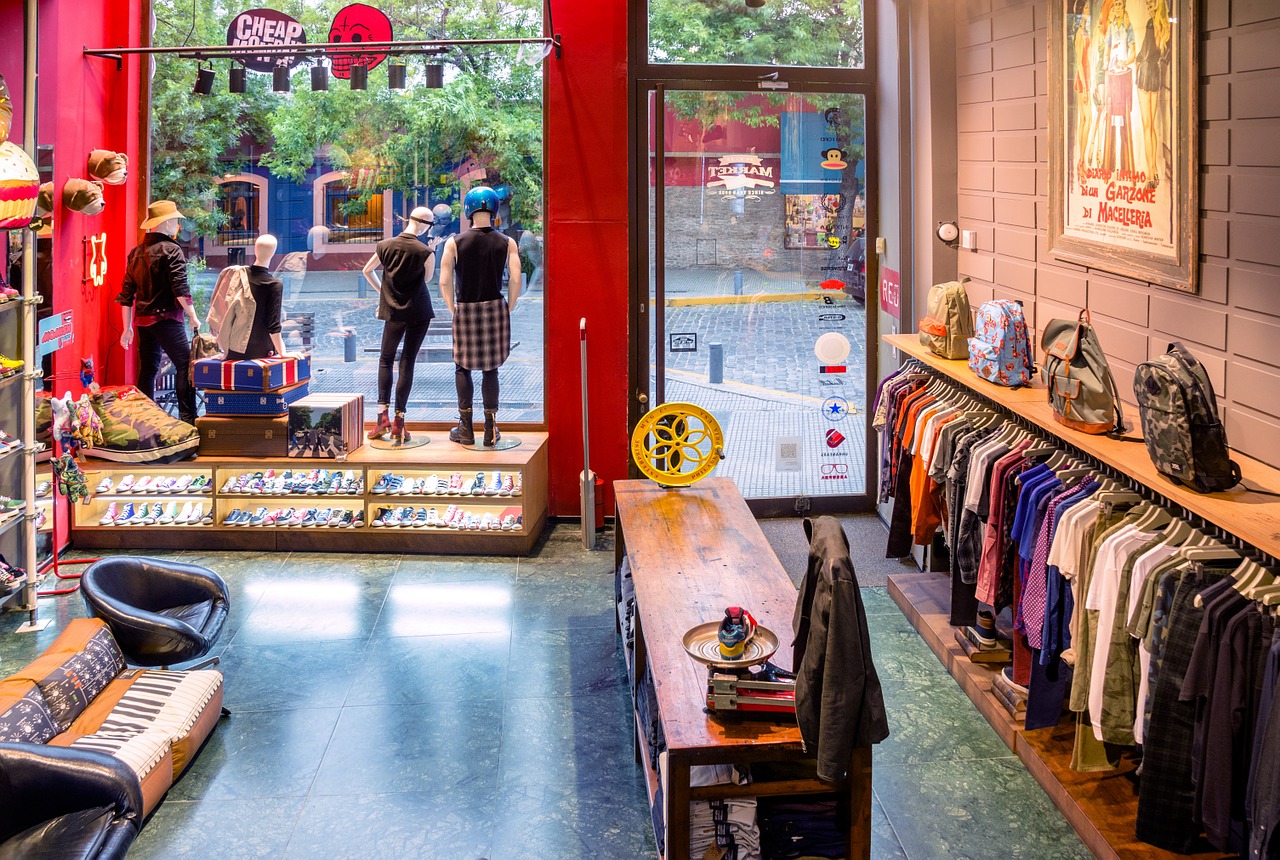