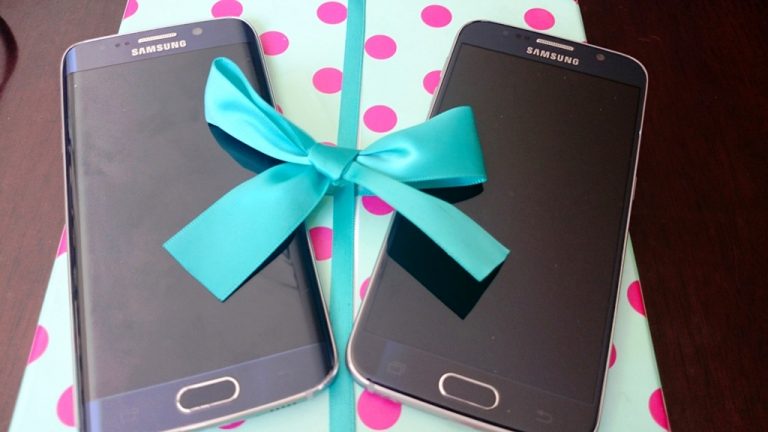 Which Samsung should you buy? The Samsung Galaxy S6 versus the S6 Edge

So you want the new Samsung? You’re given two choices this time: The Samsung Galaxy S6 versus the S6 Edge. But what is the real difference? Does it really come down to a curved screen? I’ve had a chance to play with both and figured I should weigh in. 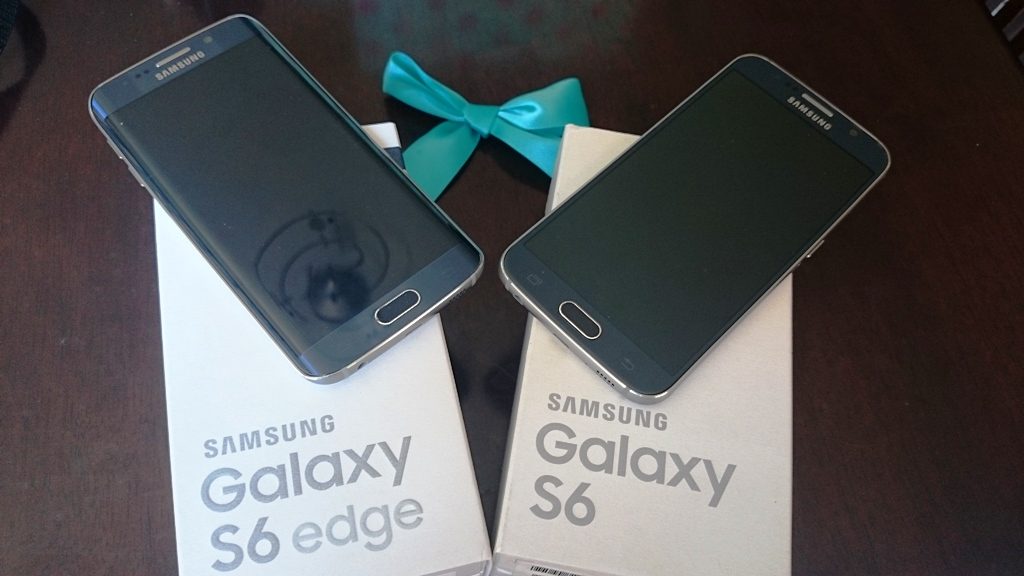 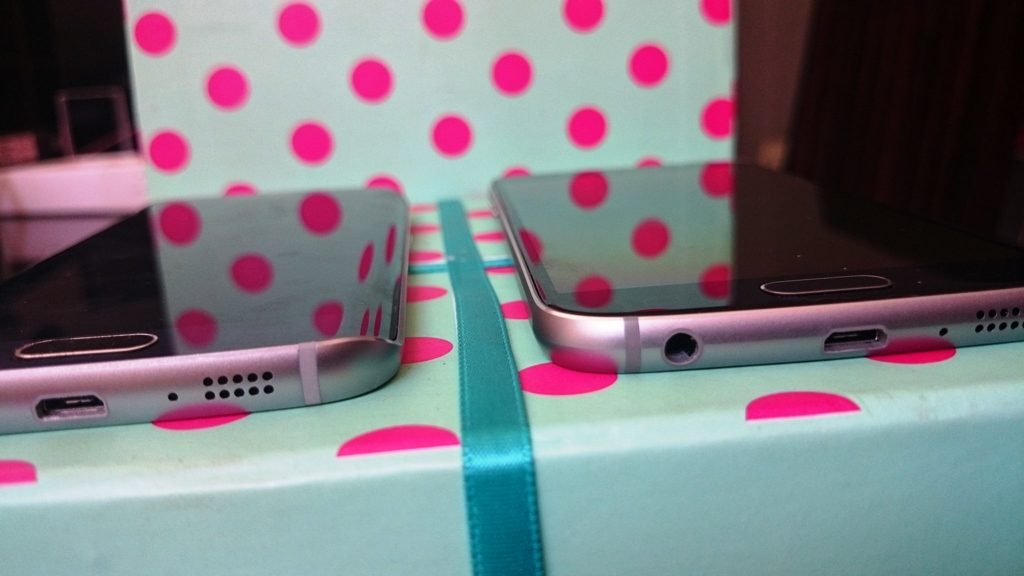 Both phones run on Android Lollipop and, in a completely unSamsung move, there is minimal bloatware (can I get an Amen?!). Expect less of the Samsung rubbish and more just standard “this is what I want, I’ll add the rest later” interface. A rather refreshing change considering the abomination of stuff added to the Samsung Galaxy S5.

Both phones have a Samsung Exynos 7 Octa 7420 CPU that runs at about 2.1 GHZ. Tech talk confusing you? They’re fast. No hang time (made better by less of that bloatware). The Samsung Galaxy S6 has a 2550 MAh battery while the Edge runs on a 2600 mAh battery. I’ve used both and got a decent full day out of them. Which was a nice change as well. However, if you do run out of juice the wireless charging option works rather nicely and you can charge it up really fast (which I love. Other smartphone manufacturers – take note!).

Now here’s where the difference comes in. The Galaxy S6 is pretty stock standard but the S6 Edge throws in some fun “extra” features. There’s the Information Stream and Night Clock which we saw on the Note Edge and basically give you information on the side or “edge” of the phone. People Edge lets you swipe the top right side of the phone and then supplies you with your most recent contacts while Edge lighting then allocates colours to those people. When the phone is face down and one of those people call, the side of the phone lights up in the appropriate colour.

Now, let me take a selfie 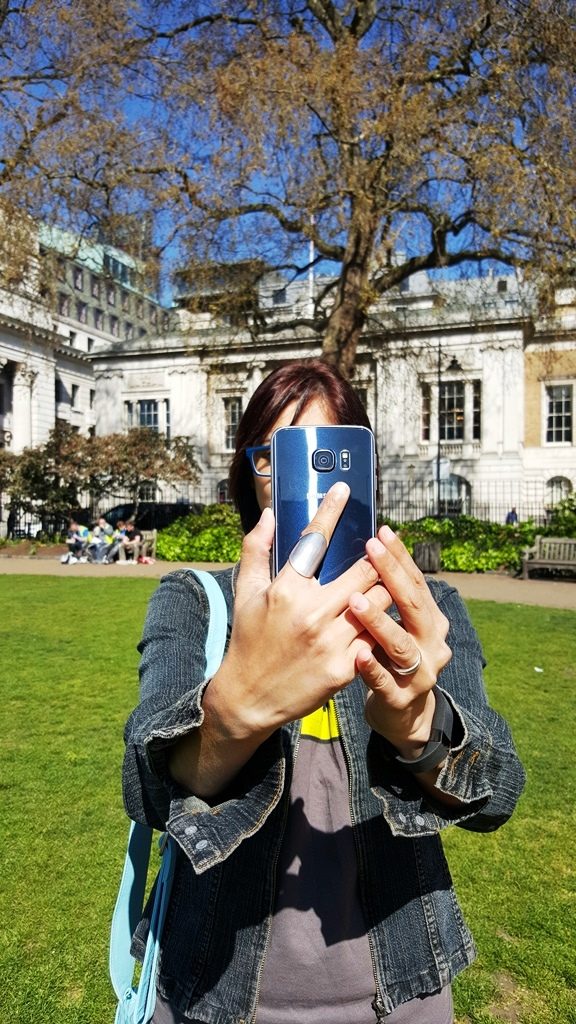 Both phones offer identical camera functionality with a 16 megapixel rear camera and a 5 megapixel front facing camera. I loved the camera on both phones. Images where clean and crisp. I Instagrammed a stack and almost never had to add a filter. There’s a “better selfies in low light” option for the girl at the club. But to be honest it still looks somewhat dark and dingy. If you’re a fan of taking photos of everything you’ll love the camera. I did. 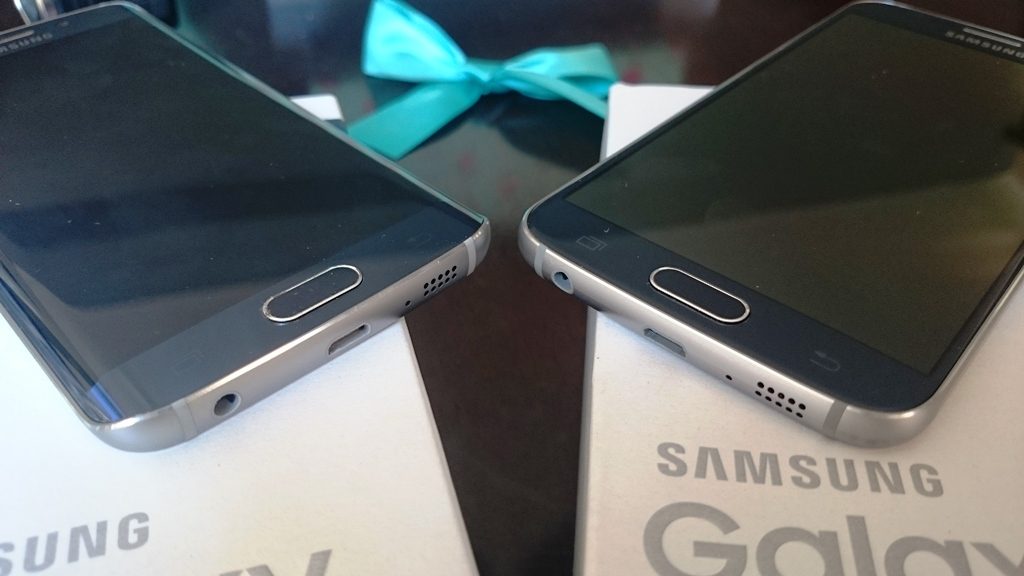 While Samsung might have led the Android smartphone charge, I always felt that their phones felt cheap. Elastoplaster backs, plastic removeable covers and just… cheap stuff. They’ve upped their game with these babies though. The Samsung Galaxy S6 versus the S6 Edge both win in the looks department. The plastic backs are gone and replaced with a gorgeous gorilla glass finish. The edging is metallic and, you’d be forgiven for mistaking the S6 for an iPhone S6 (during Mobile World Congress we ran an Instagram comparison and iPhone owners got it wrong!). They’re beautifully crafted phones, though the sticky out camera buttons are less than ideal. 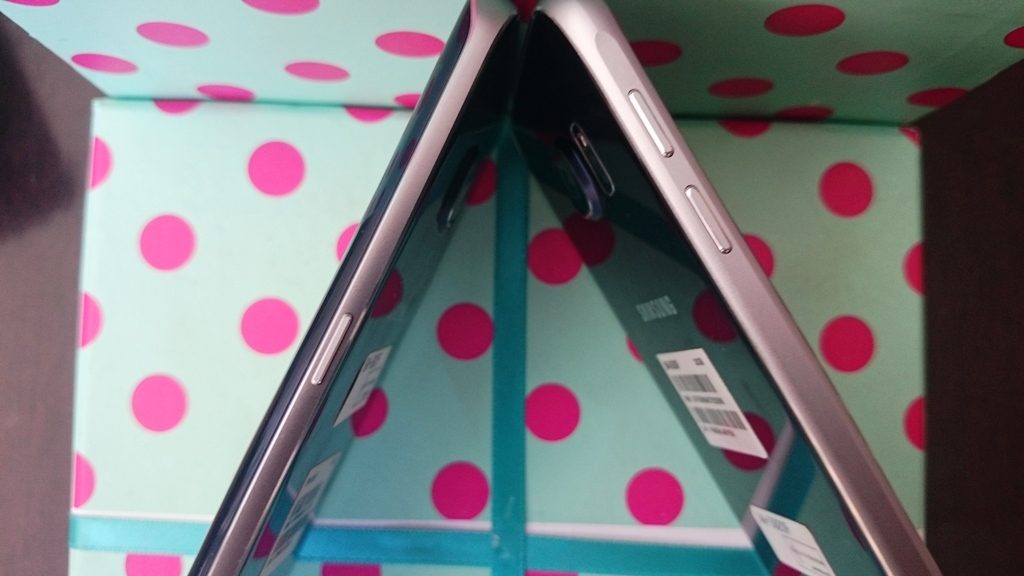 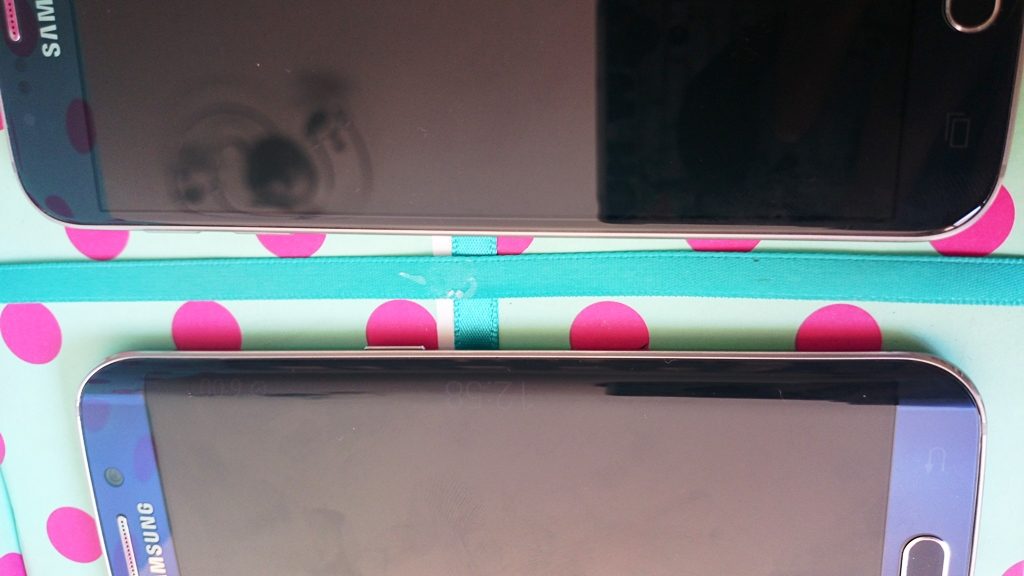 Obviously there is one fundamental different between the Samsung Galaxy S6 versus the S6 Edge. The screen shape. Both phones have a 5.1″ QHD Super AMOLED display offering up 2560 x 1440 pixel resolution and 577 pixels ppi. The displays are vivid and beautiful but the S6 Edge trumps it’s dumpy sister courtesy of that curved edging. While the S6 display is flat, the s6 Edge has those slightly curved edges. It’s such a tiny difference but I do think it made all the difference when watching YouTube videos.

So which is better? 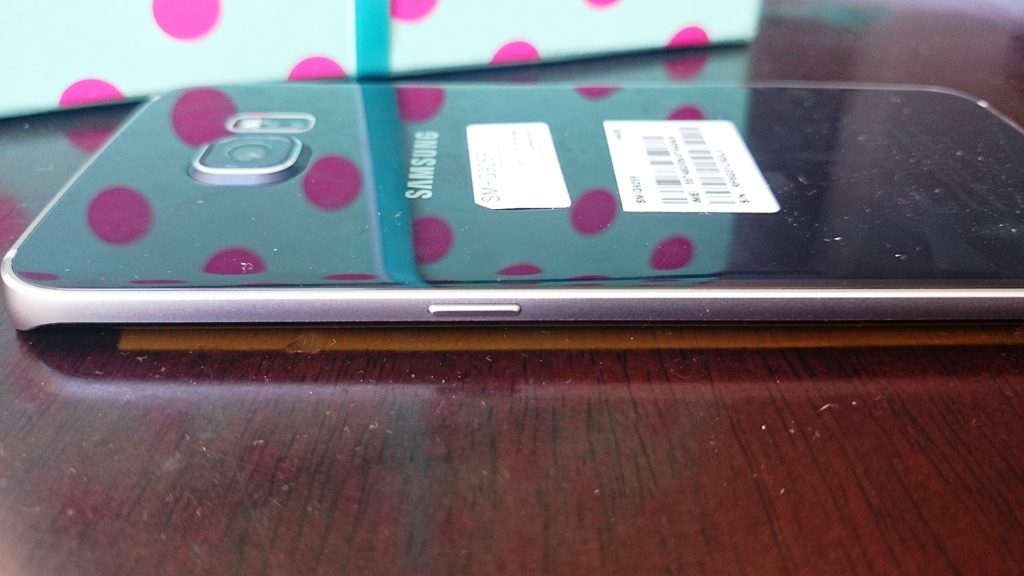 I’m going to put my head on a chopping block here and tell you they’re both pretty much the same. One has curved sides and a few added features that I guarantee you won’t probably use because they’re gimmicks more than anything else. Both are strong smartphone contenders. Beautiful to look at and glorious in day to day use. Samsung has upped their anti and designed premium devices that outshine the brand’s predecessors. BUT, they don’t outshine what is currently on the market. They’re much of the same. Meaning the price tag on the S6 and the rather exorbitant tag on the S6 Edge are completely unjustified.

If buying a curved screen means that much to you I’d hold out for an LG G Flex 2 or HTC One m9. If you really need your phone notifications to change colour when someone rings… there is probably an app for that.

When is comes down to it the Samsung Galaxy S6 versus the S6 Edge is a major step forward for Samsung, but a rather “meh” moment for smartphones. Something that seems to be becoming the norm in 2015…. 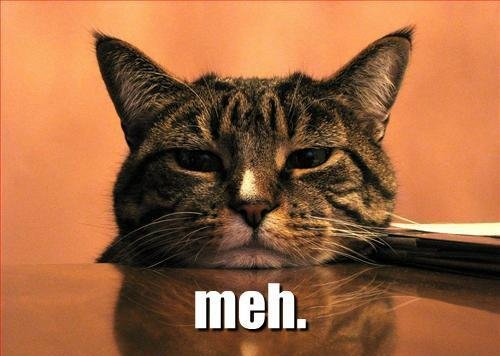 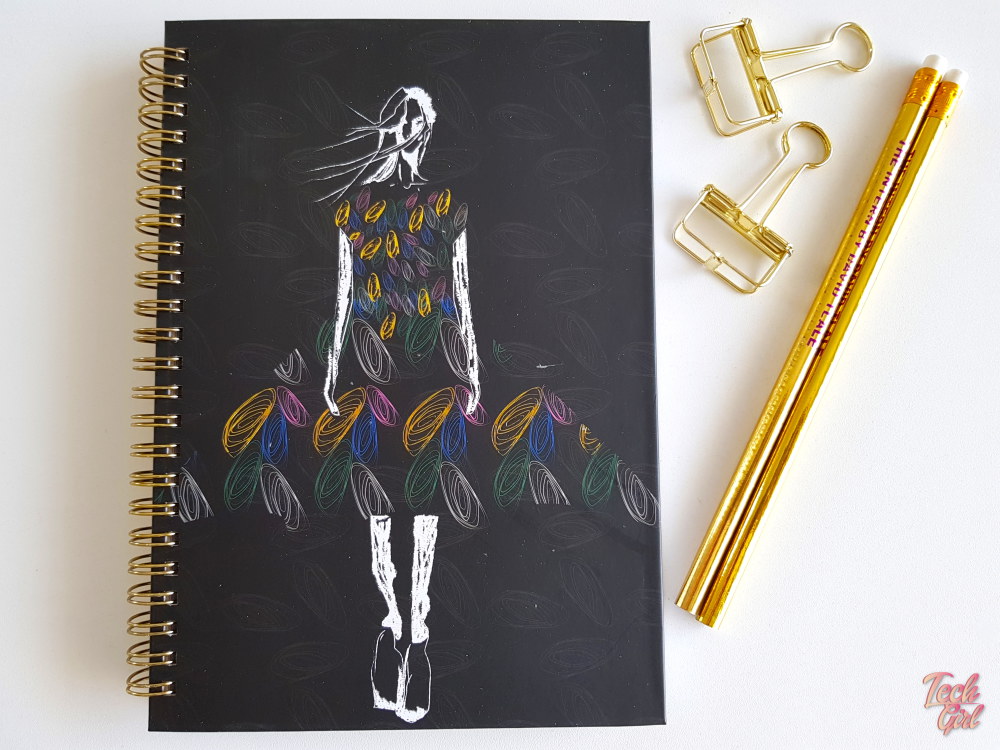 My South African stationery find from a local designer