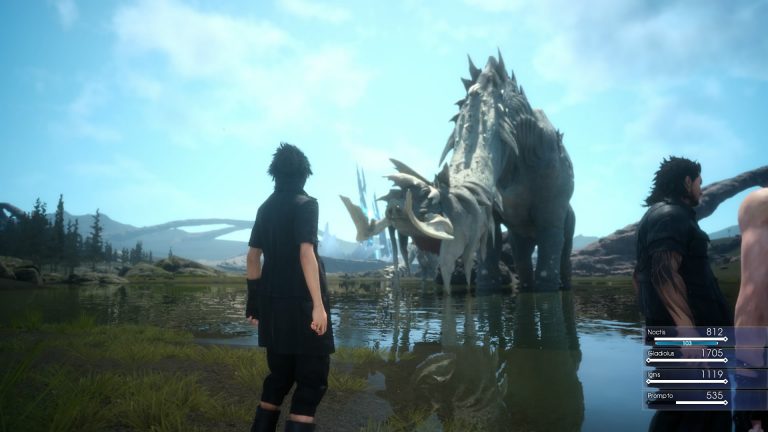 At last, I finally got to walk the plains of Duscae and slay a Behemoth. As predictable as the demo was, I could not help but be excited for the future of the Final Fantasy series, as Final Fantasy XV set forth to mesh what we love, and what we could love into one huge, open world game. 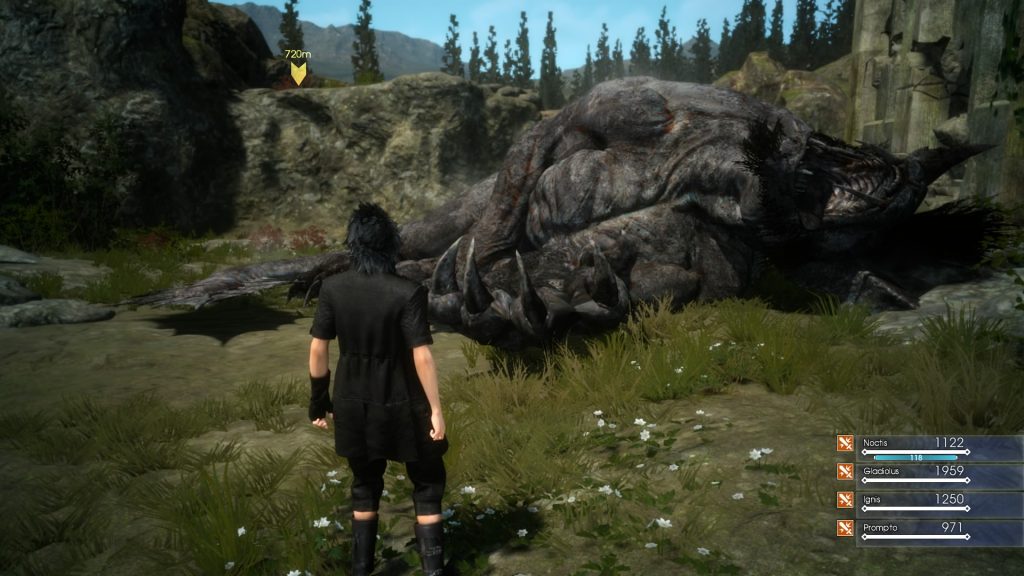 Not much is known about the storyline at the moment, and even the demo does a terrible job at setting the tone for the full game. I think this was the idea at the time as the demo is the benchmark for the game’s combat and delightfully tasteful open world. Think of it as a teaser of what you will be doing throughout the game. All we know is that the Militia forces have taken hold of the main city and Noctis, the Prince, has had car troubles on the way to the main city. 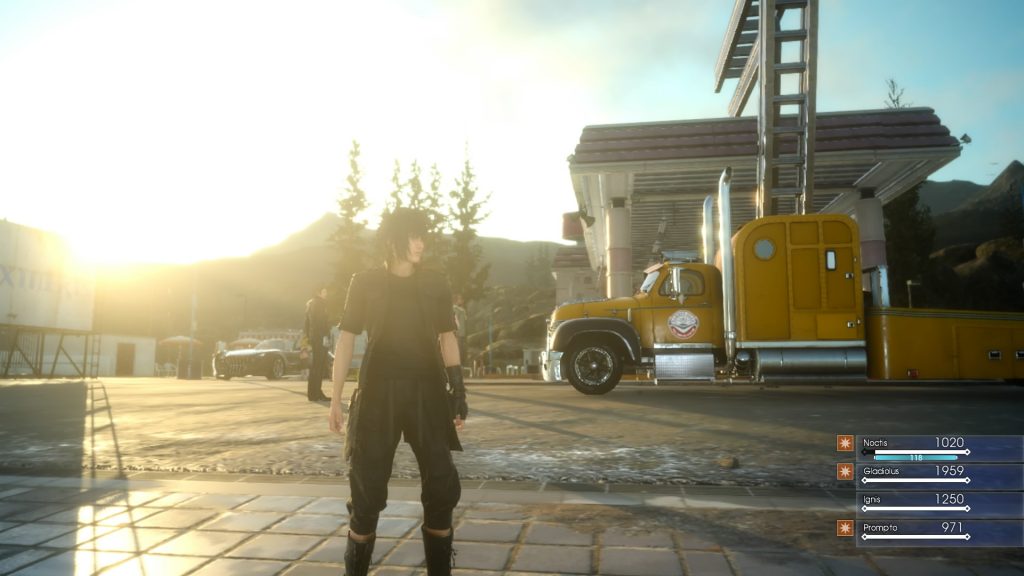 There are brief hints of the game’s expected-to-be lore, like when you finally amass the power to summon the powerful Eidolon, Rumah, Noctis whispers “Now I know why the stories are told”. This gives us a brief hint that points at a strong emphasis on the Gods in the game, something every Final Fantasy title has been known for. 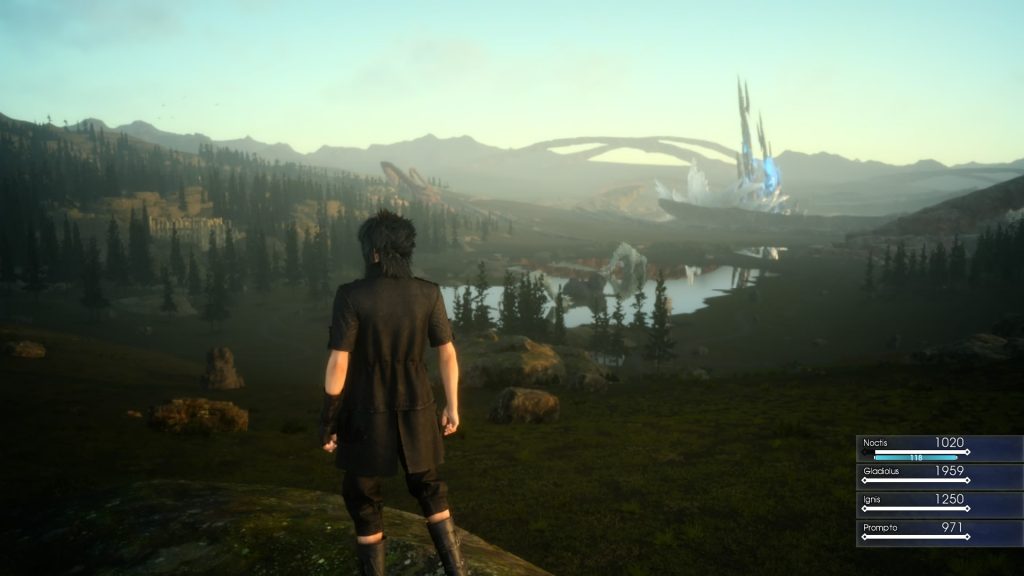 Instead of the traditional turn based combat, Final Fantasy XV takes the combat to a faster level. This time around you only control Noctis. Switching between equipped weapons during a battle is something new, and allows you to change up your attack scheme if you are feeling overwhelmed. Each weapon can be slotted into different attack slots, creating a new attack form for each weapon. Depending on what you want to attack with after you have successfully parried with be decided by what weapon you have in the reaction slot. 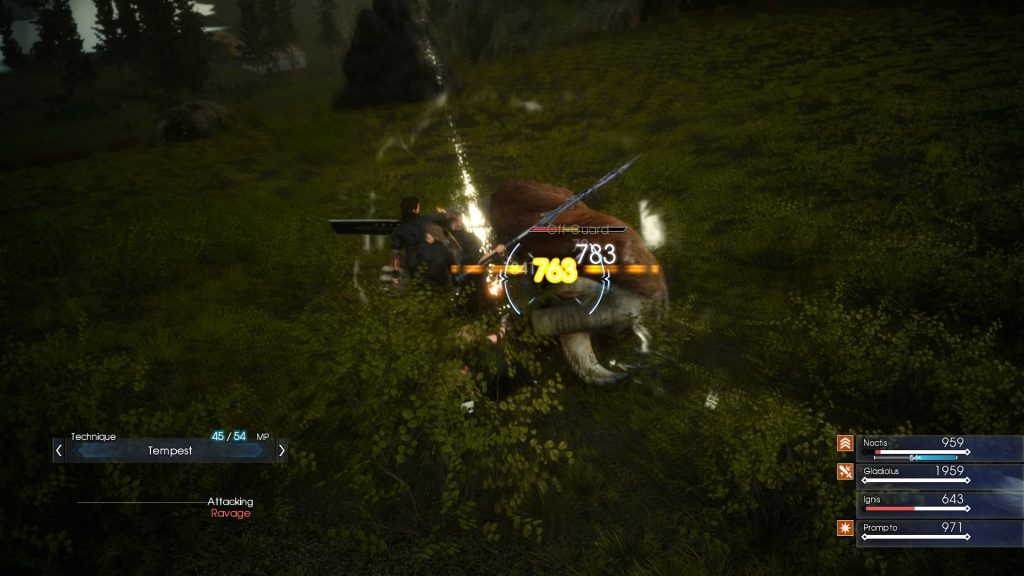 It is a definitely a new take on the battle system, the ability to run around an area and even warp into enemies using Noctis’ war attack. It seems that the more weapons you find in the game the deeper the combat will go and the more advanced the combo system will become. I kind of liked the combat, it felt new and refreshing, but intense at the same time. 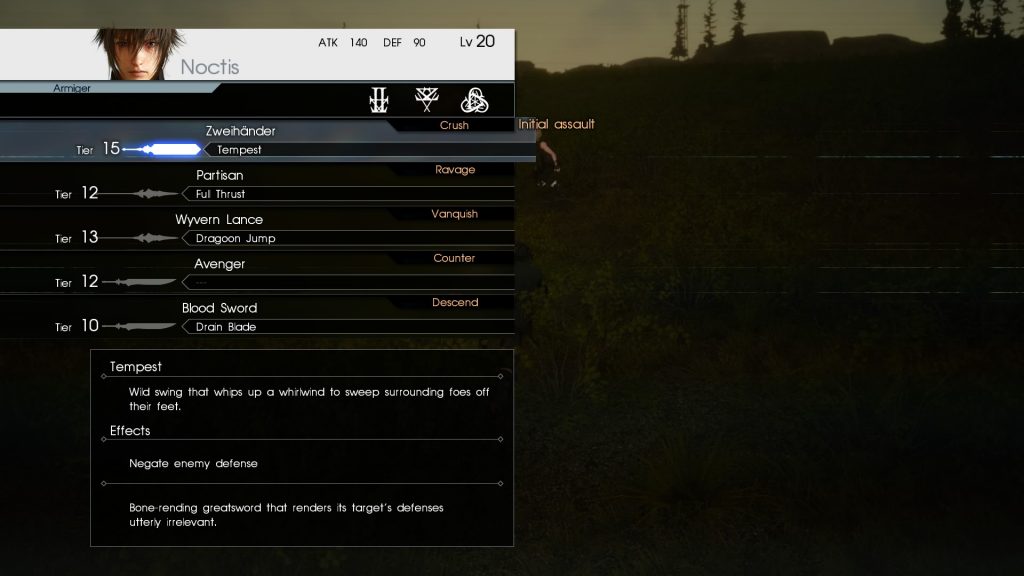 As for the mana, during the demo there were no signs of magic, but we have seen some spells like Blizzaga appear in gameplay videos in the past. In Episode Duscae, Noctis uses up mana by dodging and using abilities that come with each weapon. If you mana reaches zero because you are just blocking all the time, then Noctis will enter a “stasis” form where he will walk slowly and will be unable to attack until it refills. As for HP when a battle is over it refills (bummer) but during battles when you reach zero HP the HP bar will turn red, when this red bar reaches zero you will die. You can use items to refill your HP and your party’s HP with a simple touch of the Touch Pad (PS4). The game pauses while in the item menus giving you a break. 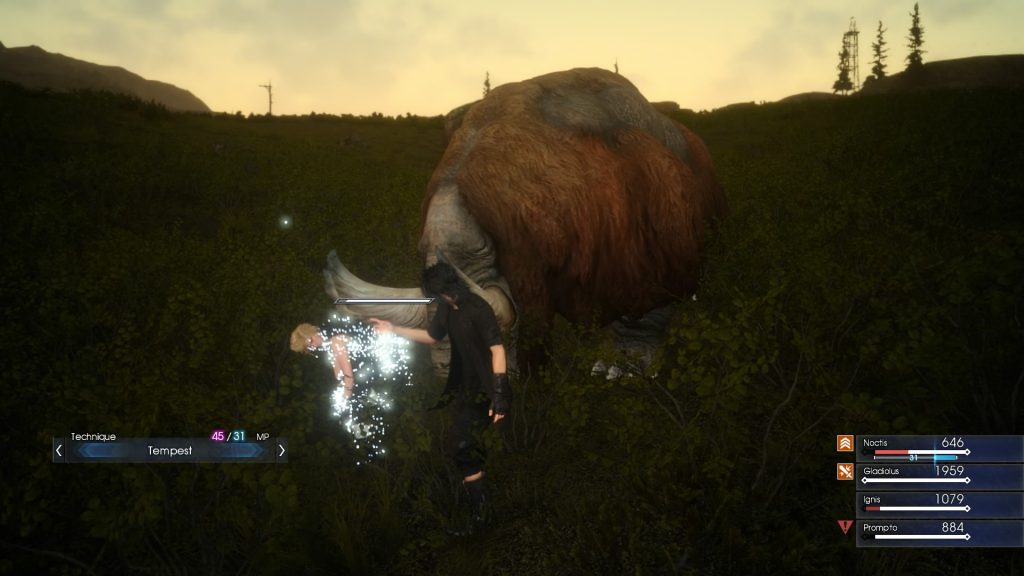 As all Final Fantasy titles go, they look spectacular. Final Fantasy XV: Episode Duscae is no different and to say it is the best looking open world title is an understatement. As you walk through the fields and look to the distance, you can only but wonder what fierce foes await you in the dark forests ahead, or when a military dropship is about to drop crazed robotic armed men on top of you. 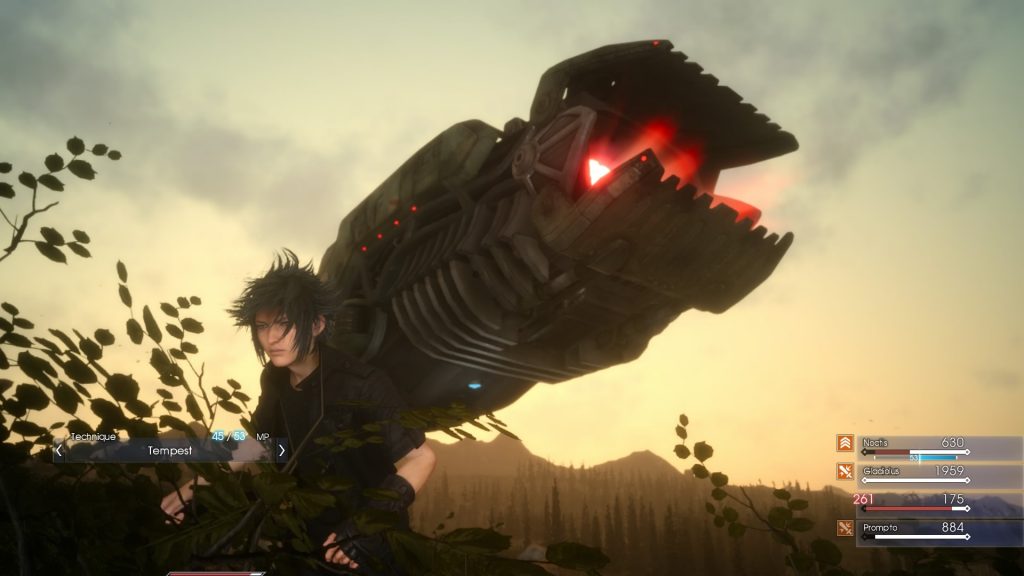 Every location is so detailed, from the shop where you can walk around and watch a guy eat a Vienna over and over again, to the Chocobo Ranch where you can watch tourists feed those ridiculously cute yellow birds.

Every environment is lush with vegetation and creatures, even when the sun goes down the game successfully creates a dark ambience where you get the feeling that anything can jump out at you at any moment. 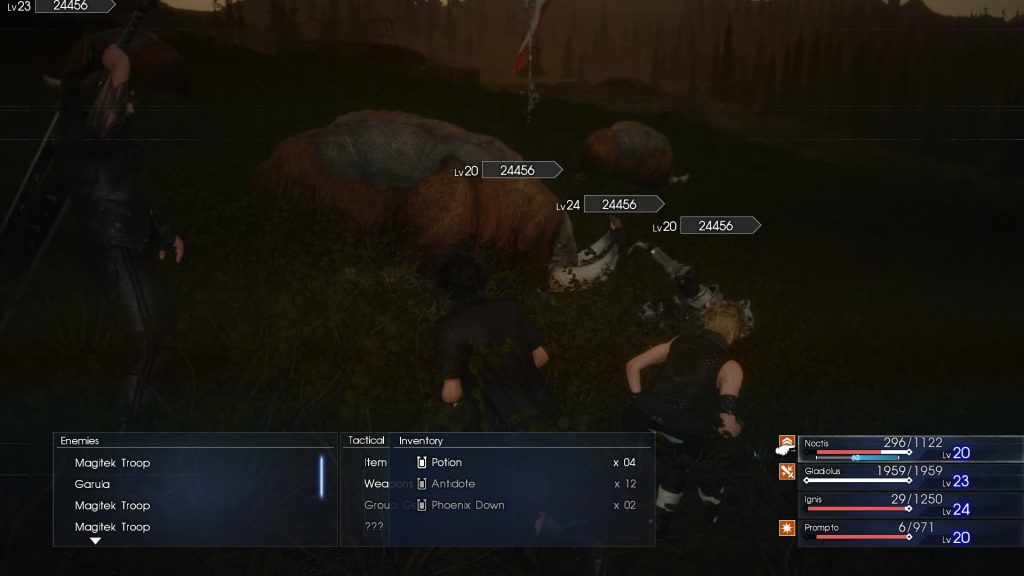 When you are not slashing up Garulas, you can rest at camping spots during the night if you don’t want to brave the goblins that come out to hunt (not recommended). Here all the EXP you gained during the day will actually be accounted for and you will level up. During the demo there were no actual technique or new abilities to learn from levelling up, but you did gain strength and HP, this was clear during combat the next day. 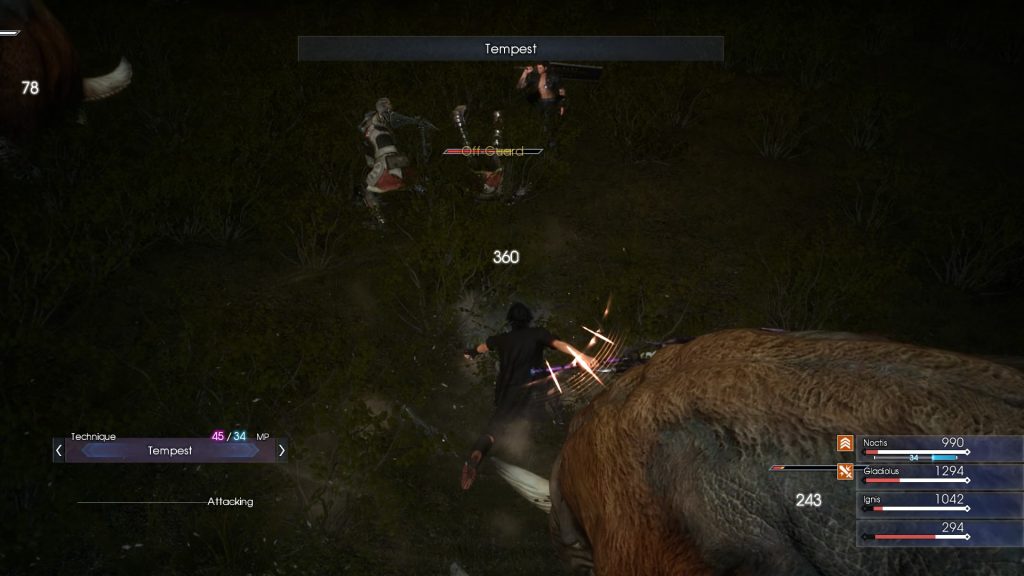 At the camp you can cook food that grants you certain buffs the next day. These buff range from increased defines to EXP multipliers. During the demo these buffs weren’t really noticeable, but I am sure that they will be vital to survival in the final game. 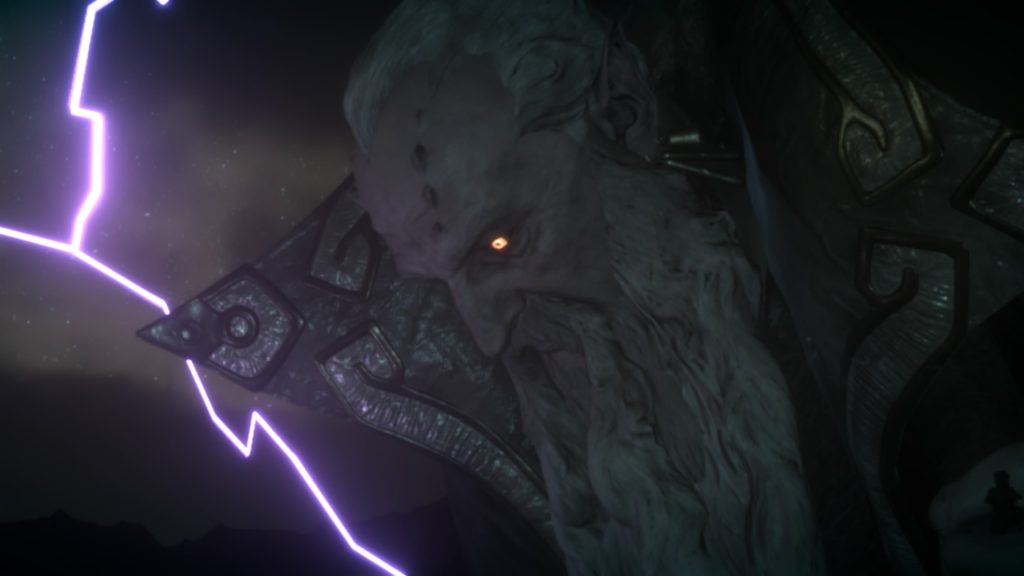 As a long-running Final Fantasy fan, even typing this conclusion gave me the chills. Final Fantasy XV’s brave approach to combat, exploration, and story will pay off in the end as it is something completely new. The soundtrack is one of the greatest in the series so far (has me humming it all day), the combat is riveting, and the exploration is captivating to say the least. I cannot wait for the final release of Final Fantasy XV, even though there is no release date in sight. 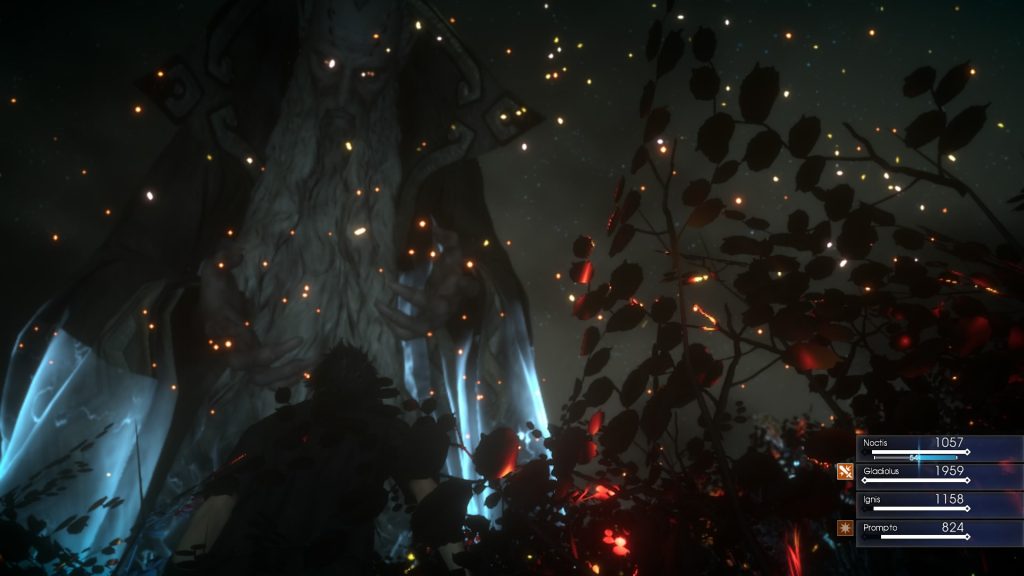